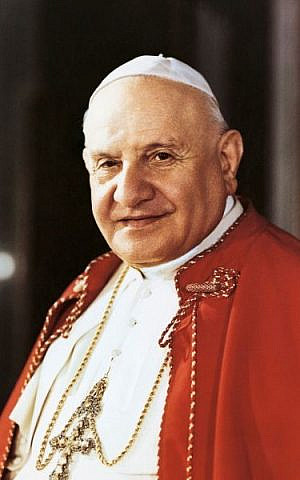 The relationship between Judaism and the Catholic Church took a dramatic turn following the promulgation of Nostra Aetate (In our Time), 55 years ago, on October 28, 1965.

Formally named the Declaration on the Relation of the Church with Non- Christian Religions, it was adopted by the Second Vatican Council, originally convoked by Pope John XXII (Angelo Roncalli) on October 1, 1962 and closed by his successor, Pope Paul VI on December 8, 1965.

Roncalli himself was the driving force behind this declaration. He conceived the initial draft of Nostra Aetate, focusing on the special bonds between the Catholic Church and the Jews, but subsequent revision broadened the scope to address the relationships with several faiths.

To be sure, Nostra Aetate changed the way the Jewish people were perceived by Christianity. By and large the document states that the Church recognizes the truth in other religions, urging a brotherly dialog with followers of other faiths. A significant part of the declaration addresses the then prevailing Catholic teachings about Jews, the so called “Teaching of Contempt“, whereby the Church deemed all Jews responsible for the death of Jesus which explained why God had rejected this ancient people. These teachings throughout centuries have created an environment which led to the Inquisition, Pogroms and Ghettos.

What was the genesis of the profound change created by Nostra Aetate? Many historians believe that in the aftermath of the Holocaust, Catholic leaders started to rethink the role played by the Church’s teachings throughout history.

Eventually, the Second Vatican Council ended-up repudiating the “Teaching of Contempt”, determining that the Jews as a collective should not be accused of killing Jesus. Furthermore, the Church recognized that the roots of Christianity are in Judaism and therefore there was a need to establish a constructive dialog between both faiths.  This brought up a number of concrete changes, such as the rewording of the Good Friday Prayer which previously referred to the Jews as “perfidious”.

Many years later, Pope John Paul II, extended Nostra Aetate by visiting synagogues and Holocaust sites. He went further by acknowledging the complicity of Christianity in the Shoah, underscoring that “Christians should not see Antisemitism just as unacceptable, but as a sin“.

It seems that Pope John Paul II fully embraced the beliefs of Pope John XXII, who in 1962 set out the Decree on the Jews, which acknowledged the “wrongs done to the Jews in the past or in our time“, adding that “Whoever despises or persecutes this people does injury to the Catholic Church“.

The contribution of Pope John XXII, (rightly called “The Good Pope“) to mending the bonds with Judaism is incommensurable. His approach starting many years earlier. In fact, his actions prior to the Papacy are less known. As the Apostolic Delegate in Istanbul, during the Holocaust, he had played a major role in the efforts to save Jews. He had a close contact with leaders of the Yishuv, like Chaim Barlas, and among other deeds he dispatched “Certificates of Immigration” to Palestine via the Vatican’s diplomatic courier as well as “Certificates of Baptism” to Jews. He also openly interceded in favor of Slovakian and Bulgarian Jews and he took due care to report to his superior at the Vatican about the plight of the Jews.

Back in 2011, the International Raoul Wallenberg Foundation submitted a thick dossier to Yad Vashem, documenting Roncalli’s vast efforts in favor of the Jews. Alas, our petition to declare him Righteous among the Nations was unheeded.

Even less known is the role Roncalli played in paving the way to the establishment of the State of Israel. Former Minister Yair Zaban has told me that as secretary of Dr. Moshe Sneh, he learned of Roncalli’s efforts to set-up a meeting between the latter and the then Vatican’s Secretary of State, Domenico Tardini. Sneh’s objective was to persuade the Vatican not to interfere in the intentions of Latin American countries (predominantly Catholic) to vote in favor of the Partition of Palestine (UN Resolution 181), which was about to pave the establishment of the Jewish State.

Mr. Zaban went on by telling me that Cardinal Tardini was evasive in his meeting with Dr. Sneh and Roncalli was disappointed, whispering to Sneh: “Pope Pius XII might lose the opportunity of redeeming himself for his lack of action in favor of the Jews during the Holocaust”.

Eventually, the meeting appeared to be successful as most Latin American countries voted in favor of the partition.

In this 55th anniversary of such an important milestone, I remember Angelo Roncalli as someone who saved Jews during the Holocaust and later, as Pope, was instrumental in changing the attitude of the Church towards Judaism.

About the Author
Baruch was born in 1933 in Las Palmeras, Argentina, a little hamlet which was part of Baron Hirsch's Jewish settlements. He graduated from a Yeshiva and spent his first adult years teaching Judaism. In the 1960's Baruch was Director of the Israeli Tourist Office in Argentina, creating a program for Catholic pilgrims. He has founded two NGO's, Casa Argentina in Israel - Terra Santa and the International Raoul Wallenberg Foundation. He is married, has three children and has his residence in Gibraltar.
Comments