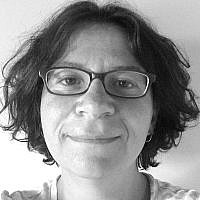 The Blogs
Nadine Lehrer
Apply for a Blog
Advertisement
Please note that the posts on The Blogs are contributed by third parties. The opinions, facts and any media content in them are presented solely by the authors, and neither The Times of Israel nor its partners assume any responsibility for them. Please contact us in case of abuse. In case of abuse,
Report this post. Jews in America today sit in a paradox – one characterized both by prosperity and acceptance, and by vulnerability and risk.  My parents, who immigrated to the U.S. seeking a better life as Jews and as human beings, found that here, but they still and always feel the existential risk inherent in being Jewish, at home and around the world.  Others, Jewish friends and acquaintances, especially those already several generations deep in America, have looked at the opening doors, increased integration, and prosperity that they have experienced, and have perhaps felt safer, more protected.  Or, at least, they did.  Much of the American Jewish community, I think, was shaken by the shooting at the Tree of Life.

Given my upbringing, I wasn’t surprised to see explicitly anti-Semitic violence in the U.S. But farther removed from direct persecution than my parents and grandparents, I’ve also chosen, purposefully, not to give much voice to the risks of being Jewish in my daily life, particularly in a society where so many others are, daily and persistently, much more vulnerable and marginalized.  And yet that sense of risk, and its potential to rear its head anywhere and at any time, has always quietly been part of me, has shaped my experience of the world.  Always half privileged and half vulnerable, my response has been, I realize now, to hold my Judaism cards close to the chest.  Very Jewish, quietly so.  For me, the shooting and its aftermath exposed those cards, took them out of my hands. I had probably never had control over them to begin with, although thinking I did was how I reconciled the gap between safety and risk.

So, while the Tree of Life shooting was, to me, no more horrible than other episodes of violence that have come before it (and since), the contours of it were far more personal. Much of this was geographic – I live outside of Pittsburgh, I teach at a college based a couple of blocks from the synagogue – so it was close to home, in places I could visualize, places I had been. Some of it was also cultural – Jewish stars appeared everywhere, from one day to the next, in and outside of the city. They were on billboards, worn by professional sports teams, posted on lawn signs outside the buildings I enter every day. They were meant to be supportive, but I found it disconcerting to see my Judaism displayed publicly by others, to have the risks I’ve always felt acknowledged more broadly. Where I was used to making individualized decisions about how I navigate mainstream America, the reaction in Pittsburgh brought into question the (misplaced) feelings that those decisions were mine to make.

Most of us, human beings, straddle multiple communities, multiple facets of ourselves, and we do so in ways both known and unknown to us.  For me, this shooting hit at one of the mechanisms by which I reconcile my multiple identities, making them more visible alongside the by-now well-worn feelings of loss that follow each of these events.  As many of us – Americans, Jews, members of other communities – continue to wrestle with the fact that none of us is ever truly safe, even if mostly, day to day, we are; I am reminded that we all see the world through slightly different eyes. Some feel more vulnerability than strength, others may feel more strength than vulnerability, but really, Jews today are both – vulnerable and strong, targeted and privileged.  Perhaps, rather than choosing to emphasize one condition or the other, or in the case of some of us, quietly straddling the two, it is in embracing the paradox, solidly occupying that space of tension between strength and vulnerability, that can help us reach both outwards and inwards – to speak out for others and for ourselves, to offer and to accept help, and to empathize with our fellow human beings in the work of trying to build a better world.

About the Author
Nadine Lehrer is a professor of food and agriculture at Chatham University in Pittsburgh, PA.
Related Topics
Related Posts
Comments