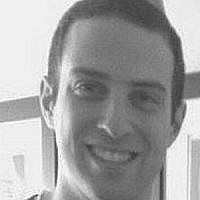 The Blogs
Eytan Sosnovich
Apply for a Blog
Advertisement
Please note that the posts on The Blogs are contributed by third parties. The opinions, facts and any media content in them are presented solely by the authors, and neither The Times of Israel nor its partners assume any responsibility for them. Please contact us in case of abuse. In case of abuse,
Report this post.

Last week Foreign Policy Magazine published an article by Eric Goldstein, Deputy Director for Middle East and North Africa at Human Rights Watch called “Can I take a Tax-Deduction on My Donation to Israeli Settlements in Palestine?”

Goldstein contends that “settlers” are moving into neighborhoods in “East Jerusalem” a territory he claims is illegally occupied by Israel. As such he asserts that American charities working to improve the lives of Jews living there should be stripped of their tax exempt status in the United States. But exactly what is illegal about Israel’s presence in eastern Jerusalem?

Goldstein bases his claim on a specific provision within Article 8 of the Rome Statute of the International Criminal Court (ICC) which deems “transfer, directly or indirectly, by the Occupying Power of parts of its own civilian population into the territory it occupies” a war crime. But rulings made by the ICC are only codified as binding international law for states that have formally signed the Rome Statute. Israel (and for that matter, the United States and virtually the entire Arab world with the lone exceptions of Jordan and the Palestinian Authority) is not a signator to the Rome Statute and so by definition any ruling applied to eastern Jerusalem based on Article 8 – which to date has not happened – would not qualify as international law; applying the term” illegal” on this basis completely is unfounded.

The governing and binding precedent of international law here is not Article 8 of the Rome Statute, but United Nations Security Council Resolution 242 which in referring to the lands acquired by Israel in the 1967 war plainly calls for “withdrawal of Israel armed forces from territories occupied in the recent conflict”. The omission of the word all has been widely understood to mean that Israel is not required to withdraw from all of the territory it acquired in the 1967 war and 242 says nothing of the eastern part of Jerusalem. It is of note that no sitting U.S. President, including President Obama, has ever referred to eastern Jerusalem as “illegally occupied” as Goldstein does. And in accordance with Resolution 242 Israel has indeed withdrawn fully from over 90% of the territories it acquired in that defensive war, namely Sinai and Gaza.

Even if Israel were bound by Article 8 of the Rome Statute it almost certainly would not apply in this case. Since Israel is not “occupying” eastern Jerusalem there is nothing “illegal” about any policy, state sponsored or otherwise concerning the transference of Israelis there. Accordingly the term “settler” which Goldstein uses time and again to refer to Jews moving to eastern Jerusalem is completely inappropriate in this context.

I also find it suspect that a senior official for Human Rights Watch, an organization whose mission is to “Defend the rights of people worldwide” would choose to single out the new Jewish residents of eastern Jerusalem as “settlers” while decidedly omitting the well documented fact that it is not only Israeli Jews, but also Israeli Arabs who opt to move there.

For nearly all of recorded history Jerusalem has stood as a single, unified city. No person moving from the west side of Manhattan, to the east side of Manhattan would be deemed a “settler”. Why the connotation for Jews in Jerusalem, the cultural and historical center of the Jewish people?

Eytan Sosnovich is the Executive Director of the New York Metro Chapter for the Zionist Organization of America. He previously served as an analyst for the United States Department of State in the Bureau of Political Military Affairs. He Tweets @EytanSosnovich

About the Author
Eytan Sosnovich is the Executive Director of the New York Metro Chapter for the Zionist Organization of America. He previously served as an analyst for the US Department of State in the Bureau of Political Military Affairs.
Related Topics
Related Posts
Comments