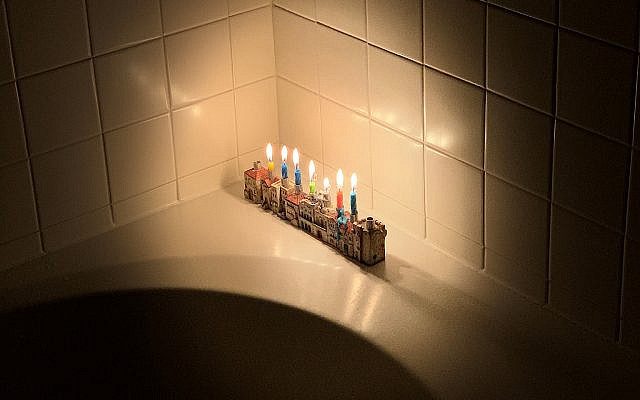 “In a time of danger, when one is not allowed to perform mitzvot, it is enough that one place [the chanukiyah] on the table.”

I remember first studying this teaching about the lighting of the Chanukah menorah 20 years ago. I was sitting in an undergraduate class on Jewish law that covered holidays, rituals, and traditions. This section of the Shulchan Arukh charges those lighting their chanukiyot to place them outside, at the entrance of their homes, facing the public domain. However, we used the above caveat to justify the leniency that a Chanukah menorah need not be placed outside or even in the window—that, really, it could be placed anywhere within the home as long as at least a family member could see it.

I now paraphrase such a caveat ironically as: “Live by the law, don’t die by the law—don’t be a martyr.” The caveat seemed to me, then, an afterthought. The essence of this 16th century teaching seemed irrelevant to me as a student. Don’t be a martyr? Why would I not be able to observe the mitzvot (commandments)? Why would I ever be afraid of putting my menorah in the window?

I have indeed experienced antisemitism throughout my life—coins thrown at me, derogatory slurs hurled at me. I have been advised not to wear my yarmulke in certain places for fear of antagonizing such sentiments. But I don’t think I have ever truly been afraid of violence or fearful for my life.

But after the flurry of antisemitic attacks this past week, my eyes are painfully wide open—blurred and brimmed full of tears.

And I realized further the stark reality of the above teaching’s caveat—it was not new in the 16th century. This caveat is already found nearly 1,000 years earlier in the Babylonian Talmud. In every generation, we have been persecuted as a people—and yet the candles burned brightly. Alas, that proverbial time seems to have come—and it took me until now to be afraid.

I was in New York City last week when the attacks occurred—I was actually blocks away from one that happened in Manhattan. Like many, I didn’t know about the attacks until they were reported in the news. But I did ask my sons to wear ballcaps and wintercaps instead of their yarmulkes going into the City. I didn’t explain why—and the winter season helped veil my ulterior motive.

I began wearing my yarmulke regularly when I was in tenth grade. As a student in public school, I was embarrassed and a bit scared to do so before then. It was not until I heard Irene Gut Opdyke speak at United Synagogue Youth’s International Convention that year that I was compelled to do so.

Ms. Opdyke, of blessed memory, was a Polish nurse who saved Polish Jews during World War II. Yad Vashem honored her as one of the Righteous Among the Nations. Ms. Opdyke had kept quiet about her experience until at the age of 53 she heard a neo-Nazi claim that the atrocities of the Holocaust never happened. She brazenly challenged all of us: “If I risked my life to save the life of your grandparents, then you should be proud of your religion and live it loudly and boldly.” My wearing of the yarmulke was not about religious observance—it was about embracing my identity publicly.

Just two years ago, when my children were envious of the neighborhood Christmas decorations, without missing a beat, I erected a 12-foot-tall menorah, right in the front yard.

Still. today, right now, like many of my Jewish brothers and sisters, I am scared.

Indeed, there is support among my friends and colleagues of other faith backgrounds—words of encouragement from Christian and Muslim clergy, members of our Armed Forces and Emergency Services, beer league hockey teammates. And that helps. More than anything, it helps me know that I have friends to confide in and share my fears.

Some will even stand up for me and my Jewish brothers and sisters. Some may even fight for me and my people. Some wear Star of David necklaces as signs of solidarity.

Today is the proverbial “Ninth Day of Chanukah”—the time for us to soldier on.

How do we address our fear? The Jewish community’s responses are vast and varied. Each speaks to a different personal need and personal void for those that offer these “solutions.”

For me, right now, what assuages my fears is to relentlessly speak out. I will stop at nothing, always calling out the hate. We must do so brazenly and publicly.

We as a community may now believe that the hate will never go away. But that should not stop us from seeking to bury it again. We can once again make it a societal anathema. We can once again silence it, at the very least for another generation, so that it doesn’t breakthrough the surface as it has currently.

Yes, it may become merely a sleeping monster—but we, as a Jewish people, are acutely aware – and have been more millennia – that the monster may never go away. But sleep, perhaps, is a very real goal.

Yesterday, on the last morning of Chanukah, I was “number ten” for minyan on such a blustery Minnesota morning. As we put the Torah away, we recited the line chadesh yamenu k’kedem—renew our days as of old. It never dawned on me before: I don’t want that. I don’t want a “yesterday.”

My paternal grandfather, of blessed memory, always used to warn my father about antisemitism: “It can happen here—it can happen anywhere. Nobody likes the Jews.” My father used to push back—but even now he is starting to say “unfortunately it looks like he was right.”

Decide what it will take for you to stop being afraid—and start screaming out to silence the hate. Not in this generation!