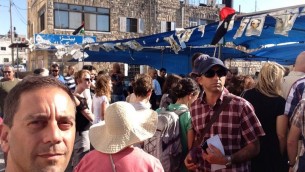 I did not pay a shiva call to the families of the three Israeli boys murdered by Arab terrorists because we live in different cities, I do not know the families personally, tens of thousands of people already visited them, and I do not need to make a statement that an Israeli Zionist condemns the murder of Israeli Zionists.

The religious Israelis who murdered the innocent 17 year-old Arab teenager said they were inspired by their rabbis. Yigal Amir murdered the Prime minister because he said he was inspired by his rabbis. Tag Mechir settler youth who burn down mosques and destroy Arab cars and cut down Arab-owned trees are almost all religious. The Chief Rabbi of Zfat ruled that Halacha prohibits renting houses to Arabs. A rabbi recently wrote a book stating that Halacha at times permits us in modern war to kill the children of our enemies. I’m not sure what to do about this from the Jewish side. But being there in an Arab mourners’ tent was my token of good will towards Arabs.

I offered my condolences to the family and Mohammed’s father did overtly look at my kippa. But I made the mistake of coming to the mourning tent with a Jewish group. And once it was a group, it was an event. And there was media. And there were speeches. And I, with a few others, walked out in protest in the first 90 seconds when the speaker said Satan resides in the Knesset. I didn’t go for politics. I went to build a bridge; not to be called to the barricades. I felt used like a useful idiot.

I went home and watched with disgust a TV interview where Mohammad’s father said that he believes it was Jews who murdered the 3 Jewish boys. Later I watch the nightly news and see Israeli Arabs – who have more rights and opportunities than West Bank Arabs protest and riot throughout the country. Closer to midnight I run out into the middle of the street in my underwear looking for a nearby bomb shelter because missiles have been launched towards Jerusalem.

I have no insights or military or political solutions to offer. On a daily basis I feel the tension of wanting to give all Arabs complete and full civil rights with my desire to live safely and securely in a Jewish country. I have nothing to share but depression. The Tanach gives alternate endings to history. Ezekiel talks about the great war of Gog and Magog. With Iran, Hizbullah, and Hamas it seems we are headed in that direction. But I hope the Middle East plays out according to Isaiah who writes that in the end of days “The Lord of hosts shall say Blessed be Egypt my people, and Assyria the work of my hands, and Israel my inheritance.”— at Shufat – @ Home.

About the Author
Robby Berman has a Masters (MPA) from Harvard's Kennedy School of Government, a Masters (MBA) from the Baruch School of Business and is the founder & director of the Halachic Organ Donor Society (www.hods.org). He is also the author of the book Min Taq Taq: A Collection of Arabic Idioms and Expressions in the Palestinian Dialect.
Comments