Now is the time for celebrations.

When I heard shortly before Shabbat that Biden had taken the lead in Georgia, I started to cry. Not tears of joy, really. But of gratitude. And of respect — just thinking about the work and sacrifice and patience it took for Stacey Abrams to lead that effort. 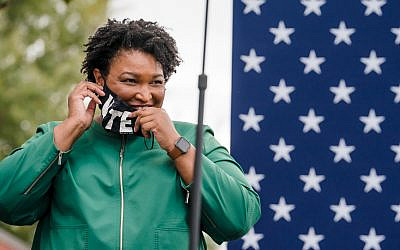 Turning a state like Georgia blue feels almost like a messianic miracle, a heralding of a time when — finally! — the rugged shall be made level, and the rough places a plain.

But it’s too soon, much too soon, to think it’s all over. Even if Trump himself doesn’t run again four years from now, someone else — someone who stands for a populist, authoritarian approach to governing America — will. And by closing our hearts to the voices of those we’ve defeated we may already be unintentionally helping that person to be successful in what seems to be just part of the great battle of our time: In places far beyond America’s shores we also see an ongoing struggle between the forces of authoritarianism and of progressivism — from the streets of Jerusalem, where protestors are continually calling for Bibi to step down, all the way to Thailand where the army is threatening, yet again, to crack down on dissenters with a coup. We see similar battles in Turkey and in Poland.

Every situation is different, but there are so many striking parallels. Haaretz ran an editorial cartoon that showed a map of Israel covered in (Republican) red except for the urban center around Tel Aviv where it was (Democratic) blue. This pattern of the cosmopolitan, economically vibrant urban centers supporting progressive policies, while more rural or industrial rust belt areas support authoritarians who manage to narrowly maintain a hold on power in elections is played out dramatically, for example, in Poland, which held a presidential election just this past summer.

The right wing candidate for president Andrej Duda defeated the progressive mayor of the capital of Warsaw by just a small margin, but progressive forces feel completely locked out of government there. On social issues, Duda makes Donald Trump look liberal.  According to the AP, during the campaign Duda said the LGBT rights movement promoted a viewpoint more harmful than communism and that he agreed with another conservative politician who stated that “LGBT is not people, it’s an ideology.”

Although Duda is officially an independent, he is closely allied with the ruling right-wing Law and Justice party. Recently, opposition to the party has broken out dramatically in the wake of a Constitutional Tribunal ruling almost completely restricting access to abortion. Mass non-violent protests dwarfed anything since the battle in the late 1980s against communist rule.

Will these worldwide progressive protests change anything? In the United States, I think the verdict is very much still out in the wake of an election that followed the explosion of Black Lives Matter protests throughout America that raised consciousness of white privilege and of systemic racism and its deadly impact. Yes, Trump lost. But almost everywhere down-ballot, the Republicans did much better than the pollsters had predicted. It seems that many Americans felt more heard and understood by the Republican narrative than they did by the progressive one.

Joe Biden will have many jobs to do as he enters his new position. Surely, he will have to do battle legislatively with the likes of Republican Senatorial leader Mitch McConnell. But if we’re going to win again four years from now, he’s also going to have to reach out to many of the people who just voted for Trump and convince them that Democrats can hear their pain too and are willing and able to do something about it.

Don’t get me wrong. I know racism is real. I know privilege is real. I grew up in a lily-white Long Island suburb full of people who used their privilege to engage in “white flight” from New York City neighborhoods where people of color lived. Racism was what made that whole place exist.

But acknowledging the existence and impact of racism does not mean we should be so quick to label another person as racist. We can focus on behaviors, instead. Rather than call a person racist, we can instead call something they said or did racist. We can share something about what we’ve witnessed or felt about systemic racism. That way people don’t feel so attacked and alienated. They’re a lot more likely to actually listen to what you have to say. But you have to also be willing to listen to them if that’s going to happen.

The battle is not over. The campaign is not over. We will spend the next four years fighting to make sure the forces of evil — the Voldemorts and the Saurons — do not rise again in America. Whether we are willing to listen may make all the difference.