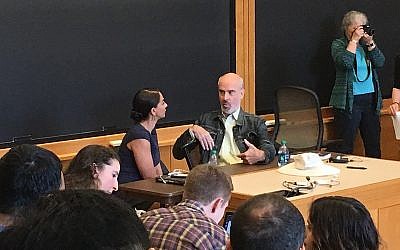 Listening to lawyers and law students speak among themselves about the law and its ultimate value can be disconcerting. They are a cynical bunch. For some lawyers, the law itself has little, if any inherent integrity or meaning. For these lawyers, the law can be used to advance the interest of one group of people without regard for the people against whom the law is being deployed as a weapon.

If the political winds are going in the right direction and a lawyer can position her sails properly, the law can be used to strip people of their right to self-defense and empower terrorists who seek to deprive them of their self-determination. For these folks, the law is not a tool used to pursue peace and reciprocal justice, but to legitimize murder and mayhem by reckless power seekers.

Noura Erakat is one of those lawyers. Speaking at Harvard Law school on Tuesday, September 24, 2019 to promote her book, Justice for Some, the ersatz human rights attorney made her status as one of these “sail-setting” lawyers perfectly clear.

Erakat, you see, is a “movement attorney,” and for her the law is a weapon to be deployed on behalf of the Palestinian cause, not to reconcile competing claims of justice between Arab and Jew in the Holy Land.

Maybe a better question is “Just how much of a nihilist are you?” because in her response to Kennedy’s question, Erakat declared that “the law itself is indeterminate,” and that “it doesn’t even have a core meaning” because “it’s going to be interpreted by lawyers who are going to shape it according to their clients needs.”

To justify her cynicism, Erakat hearkens back to theorists working for the colonial powers who established a system of international law that justified the murder and plunder of indigenous people living in the colonized territories of the great European powers before World War II. These theorists set up a system that the colonized were eventually able to use to advance their own interests in places like the United Nations.

Now that it’s her turn at the helm, Erakat is using legal theory to serve the interests of Palestinian elites who have deployed terrorists into Israel in an attempt to force Israeli Jews to abandon their status as a sovereign people. The target of Erakat’s lawyering is Israeli Jews who refuse to live as a minority in a Muslim or Arab society.

To legitimize her assault on Jewish sovereignty, Erakat falsely portrays Israeli Jews as interlopers in the Levant, asking rhetorically in her book, “Do Jews have a right to self-determination in a territory which they did not reside, but settled?”

On one hand, Erakat, the sail-setting movement lawyer, laments how one group of legal theorists worked to deprive indigenous peoples of the world of their lives and property. But on the other hand, she sordidly works to deprive Jews of their status as indigenous to the Middle East.

During her talk, Erakat proclaimed that Palestinian terrorists do not have the right to target Israeli civilians, but her overall narrative is one that legitimizes Palestinian attempts to achieve by violence what was offered at the negotiating table at Camp David and the Clinton Parameters. (The Clinton Parameters, which would have given the Palestinians a state, are not mentioned once in her book.)

None of this should come as any surprise, because cynicism is built into the warp and woof of the legal assault on Israel (and the West) originating from the Middle East, where anti-Zionism (and antisemitism) remain dominant ideologies.

In 1990, more than 50 Muslim countries signed onto the Cairo Declaration, which stated that the signatories affirmed and acknowledged human rights (such as free speech and freedom of religion) to the extent that these rights do not contradict the teachings of Islam.

This represented a clear and indisputable distancing from the Universal Declaration of Human Rights, which was signed into force soon after the United Nations was established after World War II. And yet the signatories of the Cairo Declaration regularly invoke universal notions of human rights to assail Israel’s legitimacy at the United Nations.

Like Erakat, and her colonialist legal theorists (whose cynicism she has inherited), the signatories of the Cairo Declaration have a very “instrumental” view of the law. They use it to assail their enemies and protect the privileges they enjoy.

Sadly, this is how “movement attorneys” roll.