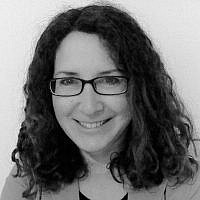 The Blogs
Abi Taylor-Abt
Apply for a Blog
Advertisement
Please note that the posts on The Blogs are contributed by third parties. The opinions, facts and any media content in them are presented solely by the authors, and neither The Times of Israel nor its partners assume any responsibility for them. Please contact us in case of abuse. In case of abuse,
Report this post.

Over two dozen boys, brothers, husbands, fathers and sons are gone. I am glued to the television, anxiously listening to each news bulletin, eavesdropping on conversations in the street. Every time I open my computer I am thrown into another spiral of misery, anger and pride. The amazing voices of our supporters across the world advocating for Israel and the incredible work being done by organizations such as Stand with Us are all helping fill a void of ignorance.

But our men are dying. Our country is crying. And the ugly head of anti-Israel, anti-semitism is rearing again and again like some invincible mythological hydra.

Looking at the pictures coming out of Paris, the faces portraying raw hatred fills me with despair. I have spent twenty years as a Jewish Educator and on occasion I have looked blankly at my students who didn’t understand why Israel was so important to me, who casually told me that they were going on holiday to Spain this year. This is not the way I wanted them to learn about the value and importance of our Jewish State.

I feel like I am Alice, tumbling through the looking glass to a place where everything is slightly off kilter. People that I love, that I have shared my home with and fed on a Friday night, post inane comments to facebook about the plight of others. We are not ignoring the deaths of other innocents but we are fighting for our own right to live in peace and without fear. This access to media, this ability to prevent another Holocaust is letting us all down.

In the time that we can formalize a thought,  we can open an app on our phones, log in to our computers and put it out there, online. We share our thoughts and feelings in a place where there are few boundaries and even less judicious editing. For every positive message about Israel, there are too many more that are spreading misinformation and creating doubt, the most insidious of malicious propaganda or simply, silence.

One of the harshest realities I am currently struggling with is the concept that we are preaching to the choir. Of my friends on facebook, all but a few are Jewish, many of them support us and love us and are sharing our manifesto. All we want is peace and security for our families. But all too few of our postings are being shared where they may make a difference. We are supporting each other but ultimately those of us who are posting and reposting the logic, the truth, the facts of what is going on around us are already believers.

Yet so many others are sitting on the metaphorical fence, more still are lamenting the suffering of the other side and most, well most people are quiet. One of my dearly loved friends who lives here, in Israel, asked on his wall why, when he knows that he is loved by his family and friends abroad do they not comment. Why are they not asking more questions, why is there silence in the halls of our world? Is it so easy for to believe the worst of us, are our horns finally showing?

Yesterday in Geneva, the U.N. Human Rights Council held an emergency meeting to once again condemn Israel for “widespread, systematic and gross violations of human rights”.  This is the seventh time that the U.N. has condemned Israel. Syria however, responsible for the deaths of 170.000 muslims has been cited four times.

There are 400,000 jews in New York, yet only slightly over 1000 of them publicly rallied to support Israel this week. In London just over 1,500 pro-Israel supporters showed up to rally for Israel, out of an estimated 260,000 in the UK, over two thirds of which live in and around the Greater London area. Compare this with the funeral of Sean Carmeli, a lone soldier originally from the United States who was buried last night. Over 20,000 of Sean’s fellow Israeli’s poured into Haifa to honor him. Most of them did not know him personally yet attended his funeral, despite the threat of sirens.

It is scary to stand up against public opinion. Sometimes we want to just sit this one out. Hide in the crowd. Now is not the time. You may not be in Israel, but we are keeping that option open for you. You may not understand or agree with everything happening in Israel right now. You may not be running from sirens.

But you are one of us. We Jews are one people. One family. Now is the time to speak.

About the Author
Abi Taylor-Abt is an outstanding Jewish Educator and Curriculum Developer who has worked in the field of Jewish Primary and Secondary Educational Curriculum Development for over twenty years. She is the author of Lessons in Jewish Learning - a grab and go curriculum for communities and Jewish schools. Originally from London, Abi spent time living in Israel, South Africa, England and the United States. After working in Boise, Idaho, Abi spent 5 years in Israel for the second time whilst her children served in the army. She is currently Director of Education for Yachad a combined educational endeavour between the conservative congregation of Beth Shalom and the reform community of Temple Emanu-El in Michigan, USA. A 2018 recipient of the Klein/Grinspoon Award for Excellence in Jewish Education, Abi is also awaiting the video version of her recent ELI Talk Detroit Speaker Fellowship.
Comments