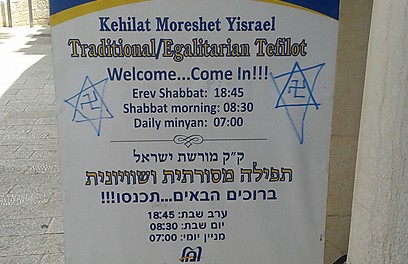 This was discovered today at the Center for Conservative Judaism in the heart of Jerusalem.  It was the second attack in two days.

Was this another “Price Tag” attack? Of course it was. “Price Tag” has become a generic title for hate crimes committed by Israeli Jews against religious groups that differ from their own. In this case, Conservative Judaism is considered “non Jewish” by the xenophobic, hate-filled Jews who did this. What once was done exclusively to intimidate Muslims on the West Bank, and then shifted to Muslim targets inside Israel, and then Christian targets, and then the Women of the Wall, now includes Reform and Conservative targets too.

First they came for the Muslims, and I did nothing…..

And now they have come for me.

Anyone who might suggest that this hate crime – which is at its heart a form of terrorism – might have been committed by an Arab, has clearly never been to the corner of Agron and King George. The chances of that are about as remote as the chances of this government pressing hard to apprehend the offender.  Yes, it’s totally plausible that an Arab decided to wreak revenge on the Price Tag attackers by schlepping to a place just across from the Great Synagogue, a place that is despised by the very people who despise them.  Yeah.  Right.

Do you think maybe it’s time for American Jews to say something about this?  Like, maybe, before the Pope gets there and something more than embarrassing happens?

In light of the decision of the Conference of Presidents of Major American Jewish Organizations to bar J Street from membership, one wonders whether condemnation of the corrosive, toxic culture that produced Price Tag would be a verboten topic in public conversation – because it might come across as critical of Israel.  To it’s credit, the Conference has expressed outrage against extremist attacks, but this hate-crime campaign must be met with a sustained and forceful response by American Jews and that response has not yet been forthcoming.

I’ve always promoted open conversation regarding Israel, because a secure, Jewish and democratic Israel is of ultimate importance to world Jewry and to America.  That security can only be guaranteed if we see Israel clearly, with all its incredible strengths as well as its challenges.  When we suppress or delegitimize those who present contrasting or critical views, especially those from within the community of Israel’s supporters, we do Israel a disservice.

But the Conference of Presidents’ decision is problematic for another reason: it emboldens those who feel that the path to a Greater Israel is now wide open with the apparent end of the Kerry process, however flawed that process may have been. Their prime goal now is to dehumanize the Other in the hopes that the Other might simply emigrate, lose hope or eventually overrun Jordan (and destroy the only stable peace partner Israel currently has in the region). Those who cling to these beliefs now have been given a carte blanche to continue their efforts, or at least a signal that we’ll do nothing to stop it.

Two arguments are most often offered when discussing these matters:  1) that division with the American Jewish community plays into the hands of Israel’s enemies and 2) that we Americans  aren’t on the front lines – Israelis need to make their own decisions without our interference.  I disagree with both.

Granted, I’m not standing in the line of fire on the border of Lebanon. I do understand the difference between being a tourist and a soldier and I would never denigrate the risks IDF soldiers take every day. But in this era of global cyber warfare, we are all on the front lines of social media, as are we on the front lines of advocacy and lobbying.  And rabbis are more than anyone.

In Israel, contrasting opinions are expressed vocally.  National strategies and the decisions of individual politicians can be challenged without having one’s loyalty questioned.  What a novel approach!  But here, a third of American rabbis say they are afraid to speak out honestly about Israel.

Like most Americans, rabbis prefer to be employed.  I understand the immense power of the pulpit to shape opinion and the manifold roles a rabbi plays, so I pick my spots when it comes to speaking about Israel. The American Jewish community needs to be a big tent, and I do not write this article without some trepidation.

But in choosing to be a rabbi, I made the fundamental decision that the future of Israel is more important than my job. I know that if I don’t speak out against Price Tag – and those who condone it – that silence becomes a tacit endorsement. I won’t stand by and watch the country I love be overrun by xenophobic haters. I owe it to the future of the Jewish people to speak out.

I understand why rabbis stay away from discussing Israel. I just question why they didn’t choose acupuncture or origami for a career. But Price Tag is another matter entirely.  Even those who are reticent to speak must find a way to mobilize people against it.

I understand why large Jewish organizations are hesitant to make waves. But I’m saying to them: You need to make waves, even if it means venturing ever so close to that third rail of American Jewry by seriously calling out the Israeli government for enabling the haters to continue to hate.

There’s a price tag for our silence. And this morning on the corner of Agron and King George, the bill came due.