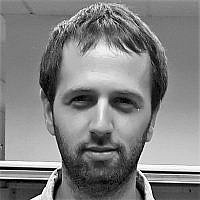 The Blogs
Sahar Zivan
Apply for a Blog
Please note that the posts on The Blogs are contributed by third parties. The opinions, facts and any media content in them are presented solely by the authors, and neither The Times of Israel nor its partners assume any responsibility for them. Please contact us in case of abuse. In case of abuse,
Report this post.

This is an open reply to blog posts written for the Jewish News recently by NUS Vice-President Rob Young and UJS Campaign Director Josh Nagli.

Rob, you recently wrote a sincere and heartfelt piece for this website, where, as a Vice-President of NUS, you called on it to “ensure that we are addressing the concerns that students raised”, of which “one of the biggest […] was anti-Semitism”.

You and Richard Brooks have spent six months listening to Jewish students’ concerns and longer than that genuinely, consistently fighting our corner.

I’ve read your articles, seen your twitter feeds, heard from people who have heard you speak in person, and I don’t for one second doubt your commitment to Jewish students.

I can’t speak for all of us, but on a personal level, I really do appreciate your work on our behalf.

There is a problem, though; your words had a real impact. Students voted to remain affiliated to NUS in no small part on the basis of your promises.

We were led to believe that there was enough willpower and capability among moderate NUS execs to keep the extreme views of the others in check.

Events of recent weeks have proven that belief to be, at best, overly optimistic.

I feel uncomfortable holding you responsible for the extremist and offensive views of your colleagues, but you are now providing ideological cover for people who don’t deserve it, and promising reform on behalf of people who clearly don’t want real reform, merely the appearance of it.

So instead of a time-wasting, unnecessary report which will add nothing, why not take real, concrete steps instead?

A decade ago, Luciana Berger quit her role on the Exec in protest at the anti-Semitism endemic in NUS, and you should be prepared to do the same.

Set an ultimatum; outline real steps that NUS can take to combat anti-Semitism, and threaten to walk out if they don’t.

And Josh, that goes for UJS too. The higher the expectations, the harder the fall. UJS has done amazing work on behalf of Jewish students for many years, but on this, you are failing us.

Maybe behind the scenes magical things are happening, but out in the open, there is barely a word, much less any action.

Where’s the severing of ties with NUS, even a temporary one until their next elections, a step which they could not ignore or dismiss? Where are the statements of support for those JSocs who have bravely stuck their head above the parapet and campaigned in favour of disaffiliation?

You run a respected national organisation with a national media reach. Instead of doing NUS’ campaigning for them by telling Jewish students to stay affiliated and get more involved, as your recent blog post did, stand with Jewish students in telling NUS to sort itself out or face the consequences.

After the most recent fiasco, involving the ARAF committee, you stated in a press release that the NUS President “has no desire to listen to Jewish students”.

Clearly that is true, but it also isn’t new. What your statement didn’t address is what you are going to do about it, beyond issuing anaemic, empty statements every few months.

When Jewish students overwhelmingly say “we want to disaffiliate” and UJS’ response is “Jewish students must not walk away from NUS”, it isn’t Malia silencing our voices, it’s you.

Six months have gone by since the election.

Six months in which Malia has failed to renounce her earlier support of violence against Israeli civilians, who are friends and family to many of us here in the UK.

Six months in which anti-Semitic, anti-LGBT, anti-feminist groups such as CAGE have continued to be welcomed onto our campuses by NUS executives.

Six months in which the situation of Jewish students has only gotten worse.

I know I’ve asked both of you a lot of questions already, but allow me just one more. Where is your red line? What will it take for you to stand up and say “NUS has gone too far, and now we’re going to make a stand”?

I look forward to hearing from you.

About the Author
Sahar Zivan is a dual citizen of the UK and Israel, and is currently entering his final year as an undergraduate at the University of Bristol.
Related Topics
Related Posts
Comments