Uncharacteristic as it may seem, I have been finding it hard to put into words what my feelings are at the moment, about the protests and the police. Sometimes you can’t translate what you feel in your gut into a cogent, logical expression of thought. This is my attempt at expressing my feelings and thoughts.

I am in total awe and admiration at the persistence and the determination of the ongoing protests against Netanyahu and how he clings to the altar of his office, to use it as leverage to wriggle out of standing trial and perverting justice. I know, I shouldn’t be surprised. Someone who has no conscience when it comes to using his position and the power of his office to manipulate government decisions and legislation for his own benefit (not to mention soliciting bribes in exchange for using his position to do personal favors for a tycoon “friend’), obviously would have no conscience to use his position and office to evade justice. Obviously he would have no conscience to drag the entire country through three elections in the space of one year – and consider doing it a fourth time – all the while, while economically and socially Rome burns and the flames of hate scorch every aspect of Israeli society.

After what we have been through during the last ten years, it would be expected that we become cynical, apathetic and have no expectations that it will change. And yet, week after week people flock to Balfour Street and to the bridges across the country to express their objection to Netanyahu’s corruption and the self-service and arrogance of our elected “representatives”. “Representatives”, in name only, because it is obvious that they represent only themselves, not us, the people who elected them. If they truly represented us, we would not have a government of 36 ministers and 16 deputy ministers out of 120, paid for with our taxes. They would not have voted to hold three elections in 12 months at the cost of 2 billion shekels each, leaving the country without a budget for two years and allowing the deficit to balloon into some astronomical figure which would seem impossible to control.

But my heart bursts with admiration to the point of emotions which bring tears to my eyes, as I witness our response to the violence and brutality of the police and their attempts to break these protests. Last week was shocking. It was shocking to see how the police picked on the elderly and weak to take their frustrations out on protestors, punching them, choking them, suffocating them. Ribs were broken, skulls were cracked (literally) and women were assaulted. And in response, this week the number of protestors grew to 40,000! We sent a message: we will not be broken by your intimidation and violence. 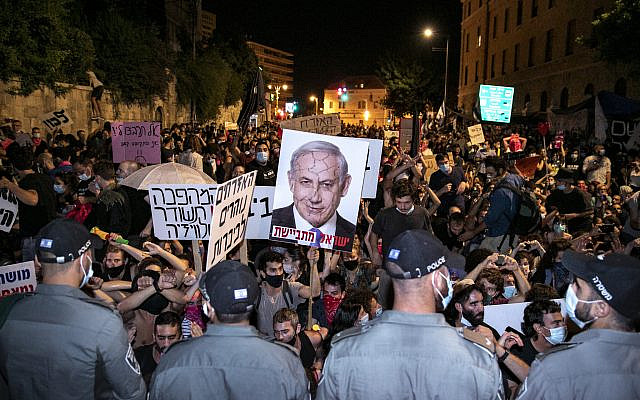 The most amazing thing about these protests is that they are truly spontaneous. They are grassroots. They represent a broad spectrum of political views. They express anger at the corruption of the government, its incompetence in dealing with the coronavirus epidemic, and their disregard for what millions of us are going through.

When Gantz, Ashkenazi and Peretz betrayed their voters and joined the “unity” government the Center-Left was shattered. We felt like we were abandoned at sea, with nothing to cling to. No leadership. No hope. Abandoned. Just a feeling that we can no longer trust those who presume to represent us. We were despondent.

And, yet. Out of this despair grew a powerful protest movement. There are no designated leaders. We are driven by a common sense that we cannot sit by while our country is hijacked by the very people we elected, who leave us destitute and with no answers, while they carry on as if our plight is of no consequence to them, and they believe that a few empty words on a podium will placate us. We have been shaken out of our apathy, and for the first time the younger generation has been galvanized into action, as they watch their future being taken from them. It is truly inspiring to see these young men and women taking up a cause and making their voices heard. To see a father and sometimes a grandfather stand beside son and grandson in protest, against a phalanx of uniformed police on horseback and not flinch, strikes me as heroic, iconic.

The message is clear; our democracy WILL NOT be sacrificed so that Netanyahu can escape justice! A Prime Minister under indictment for corruption DOES NOT have a mandate, moral or legal to lead us. But if you presume to be such a great leader, for God’s sake, LEAD ALREADY!

And now a word about the police. There are approximately 35,000 policemen and women in Israel. It seems incongruous that on the one hand Netanyahu flays the police for being part of a conspiracy to bring him down, and at the same time relies on them to break these protests and protect him from the anger of the people. But, there you have it. Demagoguery always exposes the hypocrisy of he who employs it, eventually. We should not confuse the investigative branches of the police with those whose job it is to “maintain order”. My anger is directed against the latter. Under instructions of the Minister of Internal Security, who dangles the carrot of Police Commissioner as a bribe in front of the nose of the commander of the Jerusalem district, the police have been harnessed as a private security force for Netanyahu. And they have lost all restraint. First, they used water cannons aimed directly at protestors from close range to literally blow them away, thereby endangering lives.  Now, since a court injunction has forced them to desist from using the cannons, they resort to physical violence with fists and batons and horses to trample them. “Law and order”? They have flaunted the law, to supposedly maintain “order”, but their violent actions have turned orderly protests into chaos and mayhem. 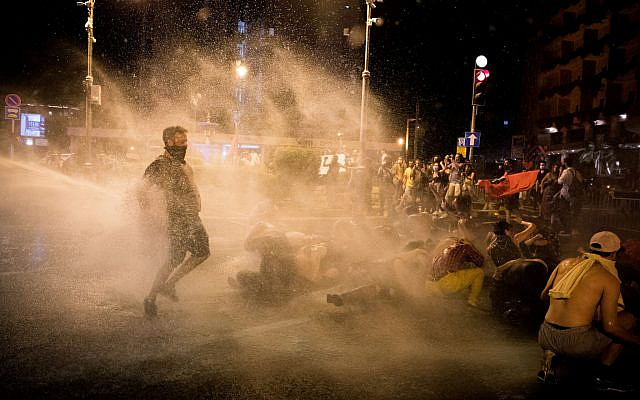 And yet, the protestors are unfazed. They have responded with a fierce determination and commitment. Our response is that our numbers grow.

I hear about people who travel from all around the country, like Illana from Beersheva and Hadar who lives in Even Yehuda, to join the protests in Jerusalem. Week after week. And on Sunday, they get up and go to work. These are the working class heroes of today.

The enemy of activism is not apathy. It is routine. The inconvenience of breaking your routine is what discourages you to get up and take a stand. There are tens of thousands of us who support these protestors from our homes – sometimes I am guilty of being one of them. What we need to do is to make our activism a part of our routine, to follow these brave, determined protestors.

There is hope. Perhaps a new leadership, a genuine leadership will emerge from these protests, from among us, to challenge the self-satisfied career politicians.