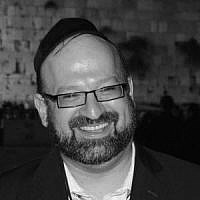 The Blogs
Yitzchok Oratz
Apply for a Blog
Please note that the posts on The Blogs are contributed by third parties. The opinions, facts and any media content in them are presented solely by the authors, and neither The Times of Israel nor its partners assume any responsibility for them. Please contact us in case of abuse. In case of abuse,
Report this post.

Rabbi Shmuly Yanklowitz recently penned an open “letter to Hashem (G-d)”, asking why we pray for a third Temple that will include animal sacrifice. I will be bold enough to assume that he has not yet received what the Kabbalists refer to as a piska min shimaya – a miraculous letter from Heaven – in response. But that’s okay, because G-d Himself already answered the question long ago.

Rav Shmuly’s struggle is based on the premise that the Torah views animal sacrifice as honorable and holy, in contrast to the belief today that it is barbaric and pagan.

But nothing could be farther from the truth. The animal sacrifice that he speaks of was almost certainly always viewed by the Torah as barbaric and pagan.

Yes, I am well aware that entire sections of the Torah and Talmud are dedicated to the importance of animal sacrifice. But a few under-emphasized verses qualify all other Torah discussion on the topic:

G-d spoke to Moshe, saying . . . ‘Anyone, anyone, of the house of Yisroel who slaughters as an offering . . . outside the camp, And he has not brought it to . . . the Dwelling Place  of G-d, it shall be counted for that man as blood; he has shed blood and that man shall be uprooted  from the midst of his people’ (Leviticus 17:1-4).

As the classic commentaries point out (see Rashi there and Sefer HaChinuch #186), these verses teach us that any sacrifice brought in 99.9 percent of the planet is bordering on murder. And the limitation is not only in space, but in time as well. It is no accident that for the majority of Jewish history, animal sacrifice was forbidden. Under current circumstances, the prophets tell us that to G-d, sacrifices are something that  ”I did not command” and “do not find favor . . . and are not pleasant” (Jeremiah 7:22 and 6:20), are not desired (Samuel 1 15:22, Isaiah 1:11, Micah 6:7, Psalms 51:18), are hated (Amos 5:21), and are an “abomination” (Proverbs 21:27).

Ask a varied group of Orthodox Jews about the Torah view on sacrifices and the answers will inevitably fall into three basic categories.  Some will simply say that since it is the will of G-d, sacrifices must be moral and correct – if we feel otherwise, then the flaw is in us. Others would mumble something about Maimonides feeling that sacrifices were a necessary concession to the times. Members of the third category would concede that the Torah is in favor of sacrifices, while admitting to a concomitant personal discomfort. But in truth, none of these answers is necessary, and none is fully correct.

The correct answer is that in almost all circumstances the Torah is very much opposed to animal sacrifices, but at the right place and time, it was, and in the future once again will be, a fundamental pillar of Judaism.

As of this writing, sacrifices are not appropriate even in the holy city of Jerusalem, and certainly not in our holy shtetls of Williamsburg, Teaneck, and Lakewood. So can we be sure that our thoughts on sacrifices are about the ones that are “a satisfying aroma to G-d” and not about those about which it is said “the offering of the wicked is an abomination?”

Is it possible that any negative feelings we have are because we simply do not have the spiritual sensitivities to understand what a sacrifice is really supposed to be? True, the very holy may get a glimpse of the deep significance of sacrifices through in-depth Torah study, but for many of us the concept is skewed; we are smashing an idol of our own making.

Imagine someone whose only experience with intimacy is that of sinful lust or as a tool to abuse or degrade. Can this person truly appreciate its potential to be the greatest expression of love and emotional closeness?  Imagine a world where eating is experienced only as a “stuff your face” gluttonous activity. Would anyone in that environment be able to fathom the joy and holiness of a candlelight dinner with a loved one, or a joyous family Sabbath or holiday meal?

Physical acts can be a force for sublime holiness or the crassest physicality, the greatest source of joy or the worst form of degradation.

The same is true with animal sacrifice. If, due to the world we were born into, 2,000 years removed from the Temple (and, as discussed above, even then sacrifices frequently didn’t find favor in G-d’s eyes), we have a hard time conceiving of sacrifices as anything other than barbaric and pagan, then indeed we are thinking of the very sacrifices that were always barbaric and pagan, then and now an abomination in the eyes of G-d.

Paradoxically, it is that very feeling that should lead us to long for their return.

The story is told of a secular Israeli soldier who, in 1967 was among the first to retake the Old City and the Temple Mount. Upon approaching the Western Wall he, along with the religious soldiers, burst into tears. When asked by one of the religious soldiers why he, a completely secular Jew, was crying, he replied “I am crying because I don’t know why I am crying.”

I have no idea if that story is true, but the idea certainly is. After recounting the Temple service during the Yom Kippur mussaf prayer, we acknowledge that currently hearing it brings “distress to our soul.” For some, the distress is that we don’t have the Temple service; for others the distress stems from the fact that we lack the closeness to G-d to appreciate it.

So fear not, Rav Shmuly, you can pray wholeheartedly for the restoration of the sacrificial order – not despite your current ambivalence about sacrifices, but because of it.  As a true “humble servant” of G-d, you can surely appreciate the need to bow one’s head before Jewish tradition, to not being overconfident in our current wisdom or progress, and to yearn for the day when “the earth will be filled with knowledge of God” (Isaiah 11:9). That Divine wisdom will make all discomfort and distress a thing of the past, and will allow us to finally authentically make another proclamation from the Yom Kippur prayers – “Fortunate is the eye that beheld all this!” – the Temple service, including the sacrifices. May it be so speedily and in our days.

About the Author
Rabbi Yitzchok Oratz is the Rabbi and Director of Monmouth Torah Links, an outreach community in Marlboro, NJ, and looks to teach Torah in away that is timely and timeless.
Related Topics
Related Posts
Comments