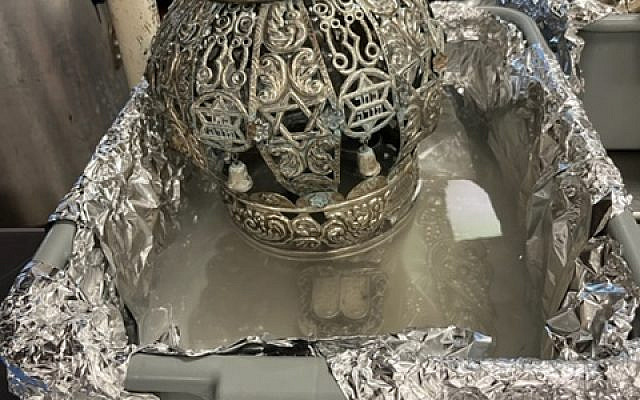 On the last Sunday morning in August, as I walked into the congregation for minyan, I noticed a group of people in the social hall outside the kitchen. On a table were neatly folded piles of dishtowels, containers of silver polish, and packages of toothbrushes.

In the kitchen, ten people were preparing plastic tubs, lining them with aluminum foil, and pouring boiling water into a mixture of baking soda and another “secret” ingredient. (I promised not to tell). Stacked in numbered piles on one counter were the silver ornaments (each paired with a similarly numbered scroll) that were to be placed on the “Sifrei Torah” (Torah scrolls) for the High Holy Days.

When ready, the solution would receive the silver. The chemical reaction created would remove most of the tarnish, depositing it onto the foil. Stubborn deposits would be subjected to the silver polish and toothbrushes.

As the leader of the group told me: “When we open the ark and we see the light reflected on the silver, that is when I feel the beauty of the Holidays.”

When do the High Holy Days begin? For a congregation, the season can begin as early as June, when the congregational machinery is set in motion.

The liturgy of the Holy Days is dominated by the phrase, “who shall live and who shall die.” Different committees and the professional staff perform a similar litany: Who is a member and who has left? Who owes dues and who is paid up? Who should receive an honor and who should not?

And there is so much to prepare: the schedule of services and the tickets to print. Do we rent chairs and if so how many? There are so many details. These logistical preparations vie with the aspirational spiritual component we hope will accompany the anticipation of the days of awe.

Perhaps a better question would be, when do the Holidays become real? For me, exchanging the decorated Torah covers for the special white ones makes the experience real.

I have always taken the Torah ornaments for granted, a hindrance that jingled and sometimes fell off if jostled. Silver polishing in every other congregation I have served, was performed by a cleaning crew or the custodial staff — if done at all.

Here, the silver is polished by a dedicated group of volunteers who have perfected a system I had never seen before. In their faces and manner, I saw respect for what the ornaments represent.

And, I saw something else: love for the congregation, its history and ideals. I have rarely been moved by the power of symbol, but looking through their eyes, I saw that these ornaments were the embodiment of what was sacred in our lives.

And more to the point, by being part of the experience, I could see how these decorations meant so much more — something my sometimes jaded eyes much needed to see.

As I walked through the building, I saw another minyan: a group of more than ten collecting diapers for Afghan refugees in our city. And I realized that these three minyans that morning represented the triad we pray for during the ten days of repentance: prayer, charity, and deeds of lovingkindness.