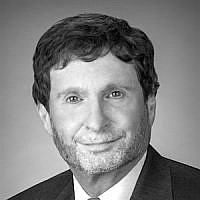 The Blogs
Dov Fischer
Apply for a Blog
Advertisement
Please note that the posts on The Blogs are contributed by third parties. The opinions, facts and any media content in them are presented solely by the authors, and neither The Times of Israel nor its partners assume any responsibility for them. Please contact us in case of abuse. In case of abuse,
Report this post.

You mean Israel is a Jewish country?  Oh, so THAT explains it!

I was wondering — I thought that perhaps it was my personal obsession over Jewish things, like a Woody Allen psychosis where someone says “juice,” and he hears “Jews.” But I really was beginning to suspect that Israel is a Jewish country. And now the new Jewish National law confirms it. I can understand why the political Left around the world and the Mahmoud Abbas dictatorship and Hamas all are so perplexed and bemused: Israel actually has dared declare itself a Jewish country? And yet there had been clues that had me wondering . . .

Like, what’s with all that Hebrew stuff? Why did they resurrect a language that, like Celtic and Latin, had been ancient and no longer in daily use?  Why did they make that the language of the country, even to the point of newspapers publishing in Hebrew? Why not English only — like in Great Britain, since the British had been given the post-war Mandate? Or Spanish, which increasingly alternates with English.

What’s with all that “Hatikvah” stuff — those lyrics: “The soul of a Jew (nefesh Yehudi) . . . Our Hope still has not been lost (od lo avda tikvateinu), the Hope of 2,000 years (hatikvah sh’nat alpayim), to be a free nation in our land (lih’yot am chofshi b’artzeinu), in the land of Zion-Jerusalem.”

Like the criticism that Jackie Mason often encounters: Uh,  isn’t that “too Jewish”? Seems awfully Jewish to me. Why not just a nice thoughtful song asking some guy named José with bad eyesight — “José, can you see?” — whether he had trouble sleeping last night, with all that red glare in the sky and those bombs bursting all over the place. (José  lives in Chicago or Baltimore or Detroit, cities with amazingly high crime statistics.) Or asking someone to save the Queen or the King and to frustrate the knavish tricks of the bad guys. So what’s with all that Jew stuff in the song? I was wondering.

So, you mean I was right?  That national song is a Jewish thing? Seriously? You mean that the song is not about the French dream of 2,000 years to make quiche and to guillotine people in Jerusalem’s French Hill?  Not the American dream of two millennia? The Arab dream? Not a song about Muslim Saracens dreaming for 2,000 years, ever since Mohammed started beheading the neighbors in the seventh century, of the day when they finally could have their one and only country in Zion? Go figure. It was about the Jews all the time. Go know.  Now I understand why the Left is a-tizzy over Israel’s new Nationality Law.

So now, with the new Jewish National law —  it is starting to make more sense. So that is why the Israeli government offices and banks have been closed for years on Rosh Hashanah and Yom Kippur. Why they don’t have Christmas trees all over the place and play Christmas carols in the Israeli shopping malls from late October through February. So that is why the country deems Saturday the Day of Rest (and, for the secularists, the Day of Soccer) — not Friday or Sunday.

So now I understand why they call the thing the Jewish Agency. The Jewish National Fund. Why they went to all that trouble to bring in Jews from the former Soviet Union and from Roumania and even Ethiopia. I always wondered: Is there a Jewish thing going on in this country that they are not telling us about?

Good thing they passed that bill. And like, what was the thing all these years with sending “aliyah emissaries” to America, telling local American Jewish citizens that they have some kind of special obligation or moral imperative to consider moving to Israel. Why? Italy does not send emissaries telling American Jews to move to Sicily or Palermo or to some of those really nifty ghettoes they made — and they made those gorgeous ghettoes just for us! — in the 16th century. Nor Poland. And, gosh, did anyone ever make more personalized ghettoes — again, just for us! — than those nice people made in Poland? (Ooops. I hope the City Council of Jedwabne doesn’t have me arrested by Interpol for writing that.) And Britain does not send emissaries across the Pond to the Colonies telling us that, hey, we murdered so many of you during the Crusades, and then we expelled the rest of you in 1290 and would not reverse the law for more than four centuries, and now our Labour Party (with a “u”) wants more Jews to antagonize — so please, ol’ chaps, come back to jolly old England! And France does not send emissaries to America, urging Jews to move to their cruddy little country, if only to supplant the thousands of other Jews now fleeing France.

But Israel has this whole infrastructure, telling Jews in America that we somehow have a special obligation to Israel, to support it with money, to lobby for it, to move there. And now I think I finally have it figured out: It turns out that Israel is a Jewish country after all. No wonder! I so much suspected as much. Wow, it feels so great to be validated!

And why were they naming all those streets for Jabotinsky and for Rambam and for Rothschild and for all these esoteric rabbis?  Like, uh, weren’t they all esoteric Jews? No Jabotinsky Street in Idaho. On the other hand, there is New Square, New York. And Palestine, Texas. Jericho, Long Island. Bethlehem, Pennsylvania. But, then again, there is Hell, Michigan.  (And, yes, it freezes over in the winter.)

But I think the biggest give-away — the thing that had me really starting to be convinced that Israel might truly be a Jewish country — is the way that all the anti-Semites in the world always attack Israel. No one attacks Saudi Arabia for chopping off hands or barring women from stuff or whipping people to death for posting on Facebook that they question Saudi policies. No one attacks Muslim countries that throw gay people out of windows and that throw feminists out of top-floor windows and off rooftops, finally letting them know what it means for a feminist in Saudi Arabia or Afghanistan to break the glass ceiling and to reach the very top. All those United Nations votes, only against Israel, even in a world of North Korea and Venezuela and Syria and Iran and Cuba and China and those butcherings of White people on farms in South Africa. It all kind-of suggested that Israel indeed might be a Jewish thing, after all. How else explain the unique bigotry and hatred against Israel, as compared to all the real tyrannies and horrible places in the world?

Most of all, it kind-of stood to reason that Israel might be a Jewish country because, otherwise, why would all the Jew-haters on America’s college campuses and in Western society be so copacetic and sanguine about attacking Israel — and only Israel — holding it to insane standards that no one else is held? There is no “Hate Iran Week” or “Hate North Korea Week” at the American universities, as there is a “Hate Israel Week” at several. Only a Jewish country would evoke that unique Jew-hatred.

But the real dead give-away to me that Israel might really be a Jewish country, even before the Jewish National bill passed, was the way that Leftist Jews in America attack Israel: Bend the Arc. The George Soros-funded  J Street. IfNotNow. “Jewish” Voice for Peace (funded by Jew-haters associated with Israel’s declared enemies). All the Jewish-Auto-Immune-Illness / Jewish-Lupus sufferers who have some ideopathic condition within their bodies and souls that sees one part of their inner essence attacking the rest of their inner essence, self-destructing internally. Like the tragedy of lupus or other auto-immune-disease sufferers, where one part of their body actually attacks another part of their body and and tries to kill them, these sufferers from Jewish-Lupus are not just self-haters but driven to self-death by something inside them that works night-and-day to destroy the rest of themselves.

Only Jews — albeit the subset who suffer from Jewish-Lupus — would hate a Jewish country so much, would lead movements in America to boycott and sanction Israel, to press America not to support Israel, to recite memorial prayers for terrorists at the Gaza border trying to murder Jews in Israel. That is the dead-give-away that Israel is Jewish: the hate for Israel that Leftist Jews in these movements and organizations manifest — always blaming Israel, always condemning Israel . . . even boycotting a hummus company that started in Astoria, Queens and now is based with factories in Richmond, Virginia and Oceanside, California  — just because it has the name “Sabra.” If it were named “Che Guevara Hummus” or “Joey Stalin Hummus” or “Mao Tse Tung Hummus,” they would slurp it like soda.

So now — thanks to that new Jewish National law — it all becomes clear to me. Israel was Jewish all along. It was not a Woody Allen psychosis on my part. They were not saying “juice” after all. It really was “Jews.”

About the Author
Rabbi Dov Fischer, an attorney and adjunct professor of law at two major Southern California law schools, is rabbi of Young Israel of Orange County, California and holds prominent leadership roles in several national rabbinic and other Jewish organizations. He has been Chief Articles Editor of UCLA Law Review, clerked for the Hon. Danny J. Boggs in the United States Court of Appeals for the Sixth Circuit, practiced complex business litigation for more than a decade at Jones Day and Akin Gump, and recently served for six years on the Executive Committee of the Rabbinical Council of America. He is a Senior Rabbinic Fellow at the Coalition for Jewish Values, and he writes regularly for The American Spectator and Israel National News (Arutz Sheva). His writings have appeared in the Wall Street Journal, Los Angeles Times, Jerusalem Post, Weekly Standard, and National Review.
Comments