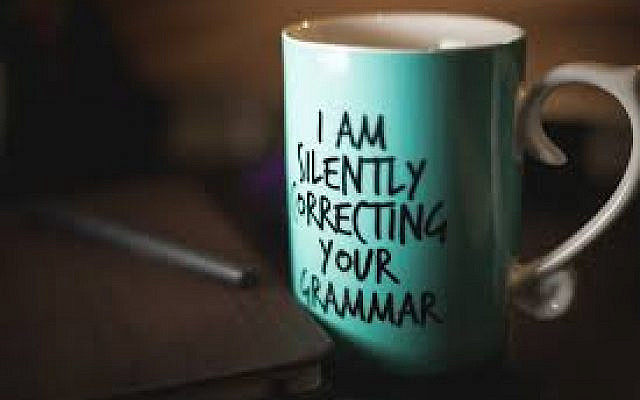 One Friday night, when my grandchildren tried to tell me a joke (in Hebrew) and my sole response was to point out the linguistic fallacy involved, it dawned on me that I had become an old curmudgeon. And a bilingual one at that.

What riled me in that particular instance was the omission of the ‘h’ at the beginning of a word (and was the crux of that particular joke), which has become endemic in Hebrew in recent years. In English it is a sign of lack of education or a specific dialect, but is not common in received pronunciation. It is typical of the Cockney form of speech that characterises less-educated Londoners. It is also a built-in feature of current French pronunciation (though I gather that in mediaeval France it was pronounced, which is how I heard it sung by an ensemble performing the songs of French troubadours).

Be that as it may, in Hebrew the absence of the aspirated consonant at the beginning of a word can give rise to great confusion, and even dismay, as happened in my case. I hate the idea of becoming a stickler for proper language use (popularly known as a grammar-Nazi), but if we let our standards slide we will lose the ability to communicate in a meaningful and intelligent way.

There are other expressions that have come into common usage in Hebrew that irk my purist ear, and I see that I am not alone in this. Whenever someone who is being interviewed on TV uses the expression ‘zot-hi’ (omitting the ‘h’ to boot) instead of ‘zot’ the Hebrew transcription at the bottom of the screen contains only ‘zot,’ indicating that the language editor has rejected the jargon term. When I heard that a new restaurant called ‘Zotti’ had opened near us I knew that I would never set foot in that particular institution.

Another bugbear is the over-use of ‘ke-ilu’ which is the Hebrew equivalent of ‘like’ as used originally, meaninglessly and extensively in teenage speak but which has now entered into common usage. I hear politicians who should know better using all the terms I have denigrated above, and although I have no great love for Benjamin Netanyahu I have to give him credit for his correct usage of Hebrew (as well as English).

Sadly, the situation with regard to contemporary English is also in the process of sending my blood-pressure soaring. From where did the ugly expression ‘I/he/she was sat/stood’ come from? Has the average English person decided to abandon the present continuous tense? I continue to be horrified by this expression whenever I encounter it, but I’m sorry to say I have heard it used even by announcers who should certainly know better.

And of course, the endemic ‘like,’ as in ‘I was…like…’ instead of ‘I said…,’ not forgetting ‘she felt like she was drowning’ instead of ‘as if’ is also anathema to my ears, and to my eyes when I see it on the printed page. But it seems to stem from America, that land of linguistic mystery, where language usage is different, and almost every verb has to be embellished with a preposition, as in ‘head up’ instead of ‘head,’ ‘talk with’ instead of ‘talk to’ and goodness only knows how they manage to twist the simple term ‘visit’ to mean a simple telephone conversation, or ‘school’ to mean college or even university. But American usage is a world unto itself, and it is not for me to criticize the language used by our cousins across the ocean, merely to bewail its insidious entry into standard British usage.

There are other terms that rile me. Where did ‘so fun’ spring from? What’s wrong with ‘such fun’ or ‘so much fun’? And I also find that turning the word ‘concern’ into an adjective, as in ‘a concerning development’ is tremendously annoying. There are plenty of synonyms for the term, and it seems to me to be an insult to proper English usage to twist the meaning of a word to suit someone’s limited vocabulary (shades of ‘Alice in Wonderland’).

I have the feeling that I’m the only person left in the English-speaking world who cares where the word ‘only’ is placed in a sentence, as even learned books by university professors, not to mention newspaper articles, novels and of course everyday speech, almost invariably misplace it when using it to modify an expression. Thus, in a rather serious book by an Oxford don the sentence ‘archival evidence for them only surfaces during the Third Crusade’ is wrong, in my opinion, as the term referred to here is ‘during’ not ‘surfaces.’ A couple of pages later I came across, ‘Bernard of Clairvaux could only preach in French.’ Obviously the ‘only’ should qualify ‘in French’ rather than ‘preach.’ There are many more such examples, but nobody seems to care about that sort of thing these days, namely, precise and correct usage of the wonderful tool that is the English language.

I fear that I will have to remain mired in my antiquated attachment to the correct English of my youth, and continue to be adamant in my refusal to move with the times. And so, I will continue to constitute the solitary rearguard action against allowing the (mis)use of language to take over the treasure which is English.