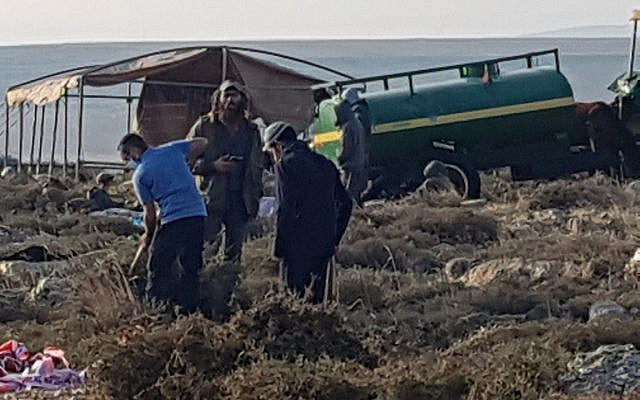 In this week’s Torah portion we meet the changed Judah who is now willing to sacrifice himself out of “worry what will happen to his father if Benjamin doesn’t return. Joseph dramatically reveals himself, and Jacob comes to see him in Egypt. As I mentioned in last week’s dvar Torah, Joseph saves the Egyptian people from famine, but does so by forcing them to sell their land and possessions to Pharaoh in return for grain.

There is also the interesting story of what Joseph instructs his family to say when they are taken to meet Pharaoh.  The story can be read in several ways.  Joseph says, “I will go up and tell the news to Pharaoh, and say to him, ‘My brothers and my father’s household, who were in the land of Canaan, have come to me.  The men are shepherds (roei tzon); they have always been breeders of livestock (mikneh)and they have brought with them their sheep and goats (tzonam) and cattle (b’karam) all that is theirs.’ So when Pharaoh summons you and asks, ‘What is your occupation?’ you shall answer, ‘Your servants have been breeders of livestock (mikneh) from our youth until now, both we and our ancestors’ so that you may stay in the region of Goshen. For all shepherds (roei tzon) are abhorrent to Egyptians.”  When they actually arrive, Joseph says, “My father and my brothers, with their sheep and goats (tzonam) and their cattle (b’karam) and all that is theirs have come from the hand of Canaan and are now in the region of Gshen….Pharaoh said to his brothers, “What is our occupation?” They answered Pharaoh, “We your servants are shepherds (roei tzon) , as were also our ancestors. We have come,” they told Pharaoh, “to sojourn in this land, for there is no pasture for your servants’ flocks (tzon)…” (Genesis: 46:31- 47:4). Later, when the Egyptians are forced to sell their livestock for grain we read, “so they brought their livestock (mikneihem) to Joseph, and Joseph gave them bread in echange for their horses, the stocks of sheep and goats (mikenei hatzon) and cattle (miknei habakar)  (Genesis 47:17) Despite being told that being a herder of sheep and goats was abhorrent to the Egyptians, the Egyptians owned both, and were also farmers.

It seems that tzon refers to sheep and goats, while mikneh refers both sheep and goats,  and cattle (Rabbi Avraham Ben HaRambam). Many of the commentators see these words as synonyms. The idea is to present themselves as having an abhorrent profession, so that haraoh will agree that they live in Goshen, isolated from other Egyptians (Shimshon Rafael Hirsch).  Rabbi Abraham argues that because they also have cattle, they won’t be as abhorrent as if they only had sheep and goats.  Some argue that anshei mikneh have servants who take care of their livestock, as opposed to being the shepherds who tend their flocks themselves (Ramban)…. If the words are synonyms, it isn’t important that Jacob and Joseph’s brothers present themselves as roei tzon, even though Joseph instructs them to say that they are anshei miknei. If there is a difference, either in terms of whether or not they have cattle, or whether or not they have the means to have others take care of their livestock, then Jacob and the brothers ignore Joseph’s advice when they say they are roei tzon. While Hirsch thinks earlier says that Joseph wanted the Egyptians to think that his family has an abohorrent profession, he later indicates that the now lofty Joseph was at some level embarrassed by his simple family, but they are not embarrassed by who they are.

With so much of my time spent protecting shepherds and cattle herders, I find this quite interesting.  Unfortunately, the reality is that for many settlers and for those in the security forces who back them, it makes no difference whether Palestinians are shepherds or cattle herders, they are all equally unwanted.  The goal is not to give them decent pastureland in the equivalent of Goshen, or anywhere else.  This past Sunday, one Palestinian cattle herder was hospitalized after being attacked by settlers in the northern Jordan Valley. The herders say that the army, actually erased their pictures, something that will make it much more difficult to catch suspects or prosecute them, especially because the word of a Jew is almost always believed over the word of a Palestinian.  In another case a few weeks ago, after a settler dog bit Palestinian sheep, but the response of the police officer who arrived was, “Why were you (The Palestinian shepherd here?”  The shepherd pointed out to me the lands claimed by one settlement, the lands claimed by the security guard of the next settlement over, the army practice zone across the proad, and the fields cultivated by other Palestinians, and asked, “Where can I take my flock?” At least I am not aware of battles between cattle herders and sheep owners like the ones that once took place in the wild west of the United States.

The fact is that shepherds versus cattle herders is not the only distinction. Like the Egyptians, shepherds are also farmers. This in fact is the season in which shepherds are planting wheat or barley. Some is to be reaped and sold, but it is primarily for their flocks to graze on during the summer months. Where farmers are not shepherds, shepherds often pay to graze on what is left after the reaping.

For many years we have dealt with settlers who bring their flocks to eat what the Palestinian shepherds have planted, but now we are experiencing more aggressive settlers who actively try to prevent Palestinians from sowing and plowing, and even try to plow wide swaths of land themselves.

On Wednesday we arrived to protect the farmer/shepherds of Dir Jarir. I have many times seen settler flocks invade this area, and sadly seen many trees and grape vines cut down nearby.  However, I didn’t expect to arrive at 7:30 am, and discover settlers setting up a new outpost.  It turns out that this was the location of the tragic incident in which the police caught settlers in the act of throwing stones at Palestinians. Sixteen year old Ahuvia Sandak died when the settlers tried to escape, and their car overturned. On the Facebook page of the “hilltop youth,” they proudly declared that they were setting up this outpost in his memory. When I stopped to investigate, one settler tried to pull open my car door. Who knows what he would have done?  Luckily, I was able to step on the gas and escape. Thankfully, the army and police we alerted protected us, but they claimed that the local brigade commander had approved the outpost. I told them, that even if they have no concern for human rights or for Palestinians, they were creating huge headaches for themselves. If the background to the chase had been that settlers were throwing stones when not living there, what will happen now that they are living a few meters from a road with steady Palestinian traffic?  What will happen in the spring when the shepherds live on the lands they sowed this week, and graze their sheep??

Returning to the mistake of Joseph in dispossessing the Egyptians, rather than finding another way to save them from the famine, may we reject worldviews based on dispossession.  Returning to Judah, may we find within ourselves the ultimate ability to think beyond ourselves, and feel for others.