The house of international law could be shaken to its foundations if Secretary of State John Kerry removes a critical cornerstone that holds it together.

Kerry says that if the Syrian ceasefire breaks down, he has a Plan B to partition Syria along ethnic and religious lines. If this happens, will it signal the end of the Westphalian concept of sovereignty? That is, the legal concept that establishes the rule of nation states over their own territories and domestic affairs as a guiding principle of international law?

In this case, would large countries with multi-ethnic and multi-cultural identities such as China, Russia, India and other nations adhere to this new norm?

These are some questions that would have to be addressed if Kerry’s Plan B is implemented.

As Jacob Zenn from the Jamestown Foundation pointed out, China is concerned by “the prospect of re-shaping the borders in the Middle East that could lead to new conceptions of sovereignty and statehood — not only in that region but elsewhere throughout the Islamic world, including Central Asia and Xinjiang.”

In a Russia already lamenting over the disintegration of the former Soviet Union, Putin is likewise concerned by the possibility of a further break up of the North Caucasus under jihadist pressure.

India, for one, has already experienced partition based on religion. In 1947, colonial India was separated into a Muslim majority Pakistan and a Hindu majority India, with East Pakistan further splitting into Bangladesh.

However, partition didn’t douse their enmity — which eventually prompted both countries to become nuclear weapons states.

Moreover, if sovereignty were no longer based on the norm of territorial integrity, in addition to ethnicity and religious belief (as in the Syria partition case), would other differences such as political beliefs or preference for different forms of governance be legal grounds for annexation or secession of territories?

In the US, the state of Texas has been trying to secede from the Union.

Lacking confidence in the long-term economic viability of the federal government and perceiving an increasingly left-leaning, Marxist-driven management in Washington, the Texas State Legislature announced in June 2015 that approximately $1 billion worth of state-owned gold bars currently held in the Federal Reserve’s Manhattan vault will be kept within its own borders.

Edwin Truman, a senior fellow at the Washington-based Peterson Institute for International Economics observed that “Just moving it [the gold] would be pretty expensive and, unless Texas is anticipating withdrawing from the Union, which I suspect is (what) some (people) want, I don’t see what advantage it is.”

On the flip side, an attempt to put a non-binding proposal on a primary ballot, asking Texas Republicans if they would support secession was rejected by the State Republican Executive Committee on Dec. 5, 2015.

Texas is referred to as “The Lone Star Republic” for a reason — it was an independent nation from 1836 to 1845, and its separatist movement has attracted Russia’s attention.

Russian state media has also taken the Crimea-as-Texas analogy and sprinted with it — noting how both had originally split off from Russia and Mexico.

In early 2015, when the US was waffling about whether to militarily intervene in the European theater, the speaker of Chechnya’s parliament, Dukuvakha Abdurakhmanov, warned that should the US boost arms deliveries to Ukraine, “we will begin delivery of new weapons to Mexico” and “resume debate on the legal status of the territories annexed by the United States,” which are now the US states of California, New Mexico, Arizona, Nevada, Utah, Colorado and Wyoming.

By coincidence in July 2015, the Pentagon began conducting a large-scale military exercise called Operation Jade Helm, with a map covering similar states in the Southwest. 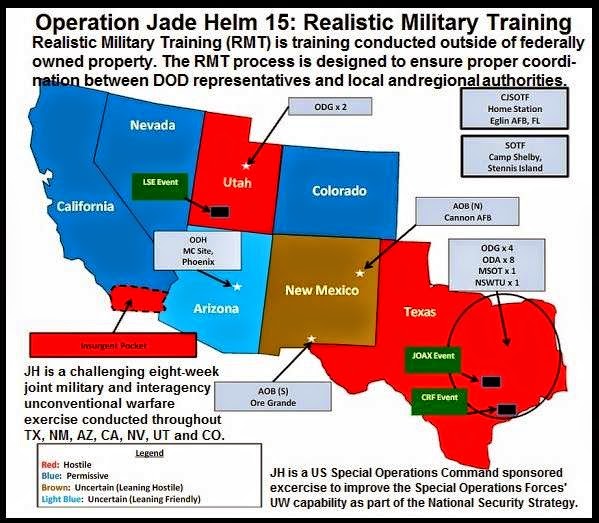 China, often suspicious that the US doesn’t support its “One China Policy” over Taiwan, Tibet and Xinjiang, also reminded Washington about its own sensitivities towards Texas and other southwest territories.

Hoping the US would extend the quid pro quo, Senior PLA Colonel Liu Mingfu signaled in a piece in The China Dream, “If any part of the United States declares independence or wants to secede, China will not intervene, or establish a regional relationship with that portion of the United States, nor will China provide it military aid.”

At the same time, if Syria were to be partitioned along ethnic and religious lines, China would be concerned by how this impacts the legitimacy of its “core interests” based on the Westphalian concept.

A Syrian partition may also stir a much wider global ripple effect where the viability of the Westphalian concept of sovereignty is concerned. There might be a theoretical chain reaction. If as outlined in a 2012 Defense Intelligence Agency report the US backs Turkish, Saudi and Qatar efforts to create a Salafist statelet in partitioning Syria, President Recep Tayyip Erdogan’s Turkey supports “East Turkestan” secession from China, China supports “Kurdistan” secession from Turkey, and Russia supports Texas secession from US — it would appear the world is slowly entering a post-Westphalian and Huntingtonian remaking of a new world order.