The Blogs
Jay Tcath
Apply for a Blog
Please note that the posts on The Blogs are contributed by third parties. The opinions, facts and any media content in them are presented solely by the authors, and neither The Times of Israel nor its partners assume any responsibility for them. Please contact us in case of abuse. In case of abuse,
Report this post.

75th Anniversary of VE Day no time to minimize Nazism. 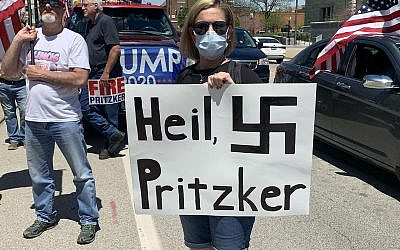 Equating efforts to minimize COVID 19’s death toll with Nazism are outrageous. They also minimize the noble principles that motivated millions of brave American vets to achieve Victory in Europe. 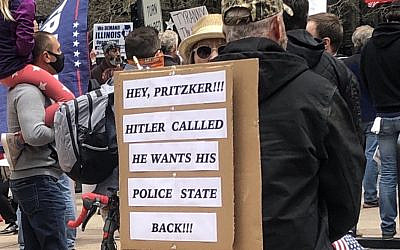 Today is the 75th anniversary of the end of WWII in Europe. It is being overshadowed by the global battle against COVID 19.

While that is understandable, the growing trend across America (and in some other countries) to analogize the battle against Nazism with efforts to defeat the pandemic are neither understandable nor acceptable.

To state the obvious: A virus is not a human-devised and implemented genocide. Efforts by democratically elected officials to limit the virus’ death toll are not Nuremberg Laws or Hitlerian-totalitarianism.

And yet….exactly a week ago (Friday, May 1) protests in Chicago and Illinois’ state capital of Springfield against Governor JB Pritzker’s COVID 19 policies included signs declaring, “Heil, 卐 Pritzker,” and “Hey, Pritzker!!! Hitler called, he wants his police state back!!!”

“Nazi” is increasingly the first word deployed against someone with whom one disagrees. The word’s ability to shock and actually help understand history is diminishing.

The protesters’ equating our governor to Hitler and Nazism may not have been aware of Pritzker – and his ancestors who fled European antisemitism – being Jewish, and how such analogies would be offensive to Jews and other victims of Nazism.

But they are certainly aware of the millions of Americans who patriotically went to war against Nazism and the half-million who died doing so. What motivated those soldiers to defend liberty was the pure evil of actual, unleashed Nazism.

The protestors in Illinois literally and figuratively wrapped themselves in our flag, associating themselves with American patriotism. But here’s a newsflash for the few among them that resorted to Nazi analogies: actual patriotism would be protesting our state’s policies without cheapening the noble cause for which so many died by invoking baseless, thoughtless analogies. The memories of those brave Americans who fought Nazism, as well as respect for those brave Americans battling COVID 19, deserve better. Battling COVID 19 is not the Battle of the Bulge. And the steps Governor Pritzker is taking in today’s battle are not analogous to the Nazism being fought in the Battle of the Bulge.

The protestors assembled without government interference. They screamed whatever they wanted. They returned home. They were not rounded-up and imprisoned without a trial. And at no point did they even have to give that macabre scenario the slightest thought.

The Allied forces who secured VE against Nazism for us 75 years ago, and the principles that motivated them and continue to inspire us today, deserve nothing less.

About the Author
Jay Tcath is Executive Vice President of the Jewish United Fund/Jewish Federation of Metropolitan Chicago.
Comments