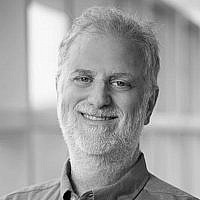 The Blogs
Yehudah Mirsky
Apply for a Blog
Advertisement
Please note that the posts on The Blogs are contributed by third parties. The opinions, facts and any media content in them are presented solely by the authors, and neither The Times of Israel nor its partners assume any responsibility for them. Please contact us in case of abuse. In case of abuse,
Report this post. 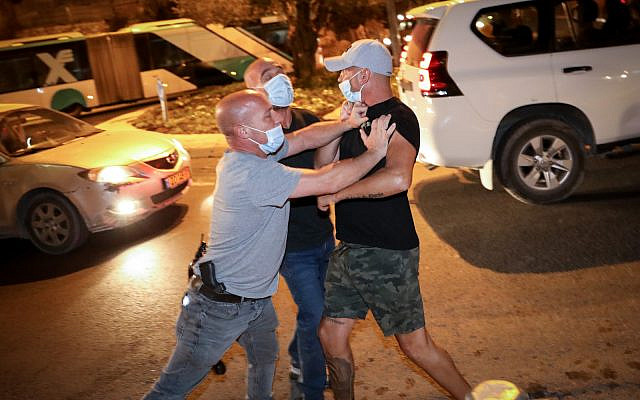 ILLUSTRATIVE: Right-wing demonstrators from the "la Familia" movement clash with police as they hold a counter protest against anti- Netanyahu demonstrators in Jerusalem on July 30, 2020. (Olivier Fitoussi/FLASH90)

Let’s face it – not many of us are in a forgiving mood these days.

Before COVID, before the murder of George Floyd, before whatever outrage has kept you up at night the last few days, just when you thought things couldn’t get hairier, the last years have been, among other things, one long offensive against the reserves of patience, compassion, perspective deep inside us, that enable us somehow to forgive.

The coming home to roost of problems long-avoided – structural racism, the effects of deindustrialization on the working class, dysfunctional health system, climate change – the efforts of bad actors – plutocrats, tribalists, white supremacists and antifas and their fellow travelers, illiberal forces left and right – have been made even worse by cultural rot blurring the lines between politics and entertainment. And anger drives clicks. If the Devil has a business model this is what it looks like.

Writers, artists, therapists, have for decades explored the difficulty of coming to terms with and forgiving those who’ve hurt us in our personal lives. And yet that seems today the easier part. Forgiving parents, siblings, spouses and friends, can be hard, but pales next to forgiving one’s enemies, not just personal ones, but groups, movements, institutions that seem bent on not just countering but actively destroying what we see as the common good. Forgiving one’s enemies, not after their defeat, but in mid-fight, here and now.

Why even should we want to forgive our enemies, when they have made, or been manipulated into, their choices? Because of what hating them does to us, to me and to you.

Because hate — and let’s face it, it’s hard not to hate these days — makes us agents of destruction, when what we most need to do is, somehow, build.

The Bible is far from starry-eyed about the human condition and knows about enemies. So much of Sefer Tehillim (Psalms) is all about facing one’s enemies, and the terror they sow, without losing one’s soul.

Lately I’ve been thinking about one particular verse from Sefer Mishlei (Proverbs), and it’s helping me get through:

Don’t rejoice when your enemy falls, and when he stumbles, don’t let your heart jump for joy. (24:17).

Why not? I mean, he’s a bad guy, right? He threatened me and now he’s gone. What’s not to like?

Because, yes, my enemy’s failure gets rid of my problem and I can get on with my life. But wouldn’t it have been better if my enemy hadn’t gone down, but rather changed instead? Would have stopped doing the bad things they were doing? If, to put it differently, if my enemy had done teshuvah – repented? Wouldn’t that be the better way for our world to become a better place?

I think this is hinted in the verse in Proverbs that immediately follows the admonition not to rejoice in your enemy’s downfall: lest God see and it be evil in His eyes and He deflect his wrath from him (i.e. your enemy).

Why? The medieval commentator Abraham ibn Ezra says: “God doesn’t want you to rejoice in taking vengeance.” Your enemy’s fall should be the triumph of the good, of the moral law which judges you as it judges him. Your victory, welcome as it is, isn’t about you.

The Talmud (Berakhot 28b) tells us that when the Sages decided they needed to compose a prayer for the downfall of enemies, the only one who could do it was “Little Samuel,” Shmuel Ha-Qatan. Why? Well, we read in Pirkei Avot (4:19) that Little Samuel so identified with Proverbs’ admonition not to rejoice in our enemies’ collapse that it was almost as though he had come up with it himself.

In the heat of battle it’s nearly impossible to forgive our enemies, to open the sluices of compassion and acceptance in their direction. But we can pray for them to change. In doing that we assert that they, like us, are God’s children. That the morals that bind them bind us too, as we all are bound in the promise, and pains, of humanity.

And one more thing. People disagree with one another for all kinds of reasons. But especially in free and open societies, and in social circles where people can speak their minds, one reason is that we haven’t done a good job of explaining ourselves, our values, our interests and concerns. Living in freedom challenges us to speak to our opponents and open ourselves to speak to them. We may not change each other’s minds. But at least we can learn to understand how one another see the world and hopefully appreciate one another’s good faith. We can’t let ourselves off the hook.

This Yom Kippur finds us in social, political, ideological battles that for many, many of us are truly the fights of our lives. In COVID, the social, political and ideological battles have become battles of public health. This global pandemic drives home that in the end, in the human condition, we need to pray for the best to emerge not only from ourselves, but from our enemies too, because we are all in this together.

About the Author
Yehudah Mirsky is Professor of Near Eastern and Judaic Studies at Brandeis University and the author of Rav Kook: Mystic in a Time of Revolution. He served in the Clinton administration as special advisor in the U.S. State Department's human rights bureau. He studied at Yeshivat Har Etzion and Yeshiva College and received rabbinic ordination in Jerusalem. He tweets @YehudahMirsky.
Related Topics
Related Posts
Yehudah Mirsky
Comments