The first grader jumped and grabbed onto me as the siren marking Holocaust Remembrance Day began to sound.

“I’m scared,” she lisped in her baby voice and squeezed me hard. She then let go and stood ramrod straight.

We’d warned her about the impending siren. But remembering the previous Gaza War — half her lifetime ago — she’d asked if we should all go stand in the “miklat” (safe room) in our house.

“No, silly girl,” I said. “We’re safe. Today, the siren is to remember those who died in the Shoah.”

Like most Israeli children, in addition to personally knowing Holocaust survivors, beginning in pre-school, my children have been raised on an age-appropriate version of the Shoah story.

“Many years ago, Jews still lived in the Diaspora, outside of the State of Israel, because we still didn’t have a state. In one faraway land there was an evil ruler, and his name was Hitler. He didn’t like Jews and wanted to make war against them throughout the whole world. We know he didn’t succeed because, Praise the Lord, there are many Jews in the world. To our great sorrow, there were many Jews who died in that war, and today we are sad about their deaths and we must remember them. Praise the Lord, today we live in the State of Israel and we have soldiers who protect us.” [Taken from a letter sent from my youngest son’s pre-school.]

The siren sounded just after our return from the all-school Holocaust Day ceremony performed by my sixth grade daughter’s class.

This is a sensitive girl — who sobbed upon hearing the history of Masada’s mass suicide — so we’d come to support her, wondering how she’d manage it.

“Being on this side of the stage is easier than in the audience,” she’d said to reassure us, while last night she invited one of her sisters to sleep in her bed and cuddle. 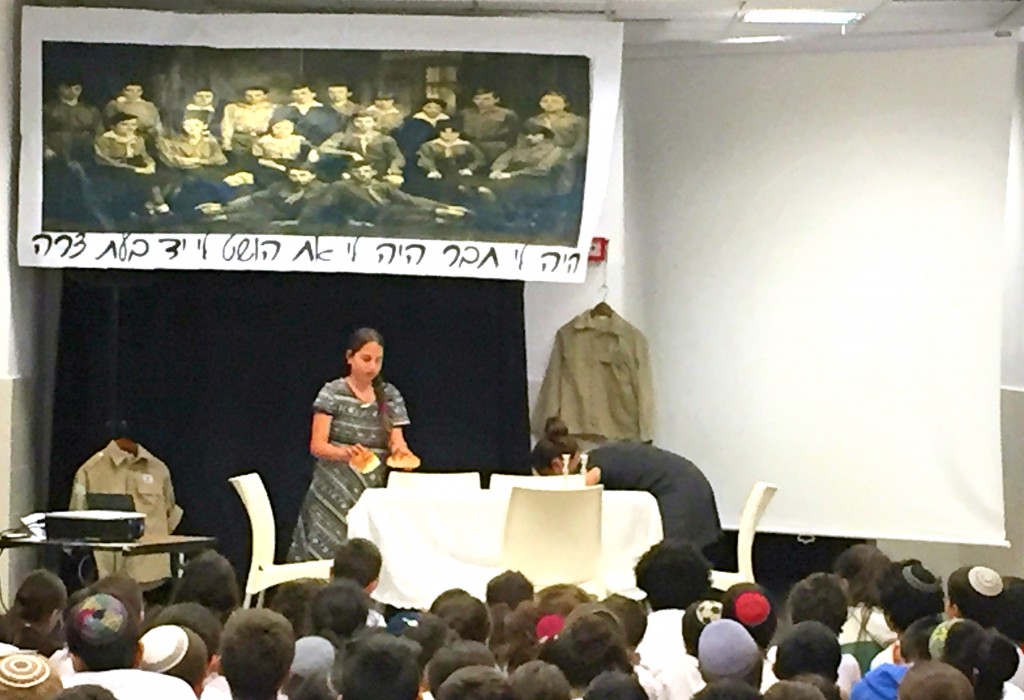 The Shoah is a dominant thread in the tapestry of Israeli lives. And so are random terrorism, falling rockets, and soldiers dying in the service of their country. With all the competition, perhaps too soon, kids inevitably learn the art of emotional compartmentalization.

But Holocaust Remembrance Day is an annual invitation to open the drawer of scary feelings.

During the wailing siren’s two-minutes, in uncharacteristically muted tones, Happy, our Naughty Dog, vocalized in a rise and fall along with it. Almost whispering at the duet’s faded finale, my first-grade daughter remarked, “Happy sounded sad. I guess dogs died in the Holocaust, too.”

She hummed a traditional tune from Passover: “Vehi She’amda,” a song which tells how God saves His people from each generation’s enemy.

“I can’t believe God didn’t save His people during the Holocaust,” she said.

Then she asked for a peanut butter sandwich and a treat.