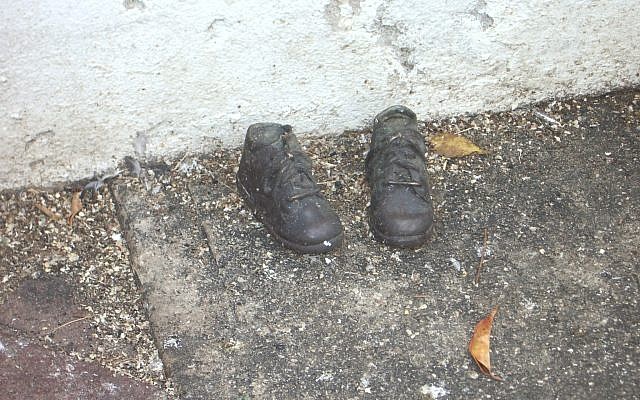 The other guy's shoes. (Courtesy of Michael S. Diamond)

O Mama, can this really be the end, to be stuck inside Potomac with the shawarma blues again? Bobby Zimmerman knows those Jewish blues. To be stuck inside a Jewish body with those transdimensional blues again. My beloved and I were coming up on Shabbos and that most obscure of the chaggim, The Eighth Day of Assembly. The tail end of Sukkot, and we were jonesin’ for some shawarma for a late Friday afternoon lunch. When I arrived at O Mama’s kosher grill I could see I wasn’t the only one with the same idea. The hole-in-the-wall bistro had a line inside. Everybody was dutifully wearing their COVID protection masks and trying to maintain some kind of social distancing in that little postage stamp of a place. That is everybody but the little Israeli pisher who was standing ahead of me in line. He stood across the plexiglas from the masked and gloved latino staff and gave his order, all the while chatting with some furniture ordering site on his phone. He wanted modern. I finally had to ask,

“Why aren’t you wearing a mask?”

“I forgot to bring it.” He doesn’t look at me, a proud little bantam cock of a workman.

“You could ask them for one,” I said gesturing at the staff, trying to modulate my tone.

“Yeah, maybe I could,” was his reply without looking up from his phone. I was seriously considering whether or not I should leave the place. Who knows where this guy has been hanging out? Then he mutters something to me in Hebrew. I am nonplused.

“Lo midaber Ivrit,” was the best I could muster. Probably correct.

“….sheker. You know sheker?” still only half looking at me. “Lies. It’s all lies. If there was a pandemic we would see the bodies.” I could barely contain myself.

“So you’re one of those insane people who denies reality?!” A particularly damning comment coming from a mental health professional, I should say. He didn’t respond. He took his order and proceeded outside to eat his lunch in the sukkah. The mild-faced kid next in line after me just shrugged.

“You can’t reason with those guys,” he offered. “Some of my family is the same. My dad’s from Byelorus. He’s liberal, but he’s related by marriage to the Bielskis. Those guys are all really right wing.”

“Wow,” I’m intrigued. “Did you watch the movies?” He nods yes. “Have you been to Israel?” I ask, suddenly surprising myself morphing into the Israeli tourism bureau.

“Isn’t it all hills and deserts?”

“No. It’s an amazing country. You can see the whole thing in a week if you want to, but thousands of years of history, all kinds of topography from the Mountains of Golan, the forests at the head of the Jordan, two seas and a desert in between.” I’d forgotten the Dead Sea, not really a sea at all now but a chemical production tank. “It’s definitely worth a trip.”

“But you know how the Israelis are treating the Palestinians.” I jump in again.

“Yes, some terrible things. And Bibi’s a thug. But if Israel didn’t exist then the Jewish people might not either.” A sudden burst of Zionism out of nowhere. So weird.

The woman behind the plexiglass beckons me so I bid my new friend adieu and turn away from the conversation and towards the assortment of salad comestibles dancing beneath the plexiglass at the shawarma bar. I smile as I grab my order, imagining the feast my wife and I will have in our sukkah back home, when I have a pang of remorse. How Trumpian of me to call the little Israeli pisher insane, and of all times on erev chag! I felt terrible. I was determined to apologize, as I was pretty certain he’d be out there in the sukkah. I walked out the door with my booty and made a hard right toward the festival booth. I was so glad to see my little Israeli pisher sitting there.

“I’m sorry for what I said before, for calling you insane.”

“Well, you know about this whole COVID thing…” I interrupted him.

“We’re not going to agree. But we’re both Jews, we shouldn’t be fighting. Especially on a chag!” And then, really out of nowhere, “I love you man.” And damned if I didn’t mean it.

“Avram,” he points to his chest, “from Kemp Mill.”

“A long way from home,” I joke. Well it is the other side of the Beltway.

And so that little skirmish in the COVID wars ended amicably. Wars in my head, I guess, American shmegegge that I am. As I was recounting my surprising little encounter to my wife while munching shawarma and salad in our sukkah, two things occurred to me. My ‘sin’, such as it was, was missing the opportunity to have a civil conversation with someone who held a point of view different from mine. The whole hearts and minds thing. Missed it. And it wouldn’t make up for it to have a better conversation with someone else. In my own meshuggeneh way, I believe that we are handed little packets of energy to accomplish mitzvot down here on the face of the planet. You can almost feel it when it arrives, like the buzz on your cellphone when Amazon has made its most recent delivery. When the package is mishandled, the potential mitzvah is starved of its energy, which in turn gets misdirected toward producing something misshapen and ugly. It doesn’t really solve the problem to resolve to do better next time. Sure, knock yourself out. Really. But the ugly thing just sits there, and sometimes it grows. No, the only thing that really does the trick is to rise above yourself, above the distribution of little packets for this or that mitzvah. Rise up to unity. You know when you’re there by the pleasure you feel. If you’re lucky the universe will nudge you there and you just have to pay attention. I got lucky. The other thing I thought about was the plague of COVID itself. And the attendant plague of incivility, deception, callousness and selfishness that has been riding shotgun alongside. The thing is, the researchers are telling us it’s the immune reaction that really makes people sick, cytokine storms and the like. It’s the excessively exuberant reaction of the immunologic self to the immunologic other. So I don’t know how it’s all going to play out in the field of COVID biology, but I’ve got a pretty good idea that the only way we’re going to save us human beings from destroying ourselves in an orgy of spite and selfishness is to learn from this apocalyptic scenario. Learn the simple matter of recognizing the other and at the same time reaching for unity. A tall order, but I believe it’s humanly possible, to love one another, as one, and other.