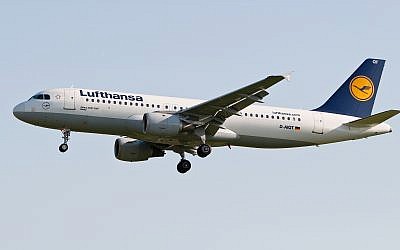 Last month I was surprised to learn that the German airline Lufthansa has direct flights to Iran. In fact, there are two other major European carriers that also have direct flights to the Islamic Republic: Alitalia and Austrian Airlines. One would think that countries that were directly involved in causing World War II and the deaths of millions would have learned the lessons of history. Evidently they have not. In light of dangerous developments involving Iran and its loyal proxy Hezbollah, I urge readers to think twice before booking their next flight on one of these airlines.

On November 29th, a cargo plane from the Iranian airline Air Qeshm landed at Beirut airport. According to several reports, the plane was carrying advanced weaponry and equipment to upgrade the accuracy of the vast arsenal of Hezbollah. Given the fact that Iran has already supplied Hezbollah with 130,000 rockets and missiles, this is a serious threat to the security of Israel.

Over the past year, Iran has been working to increase the range and accuracy of Hezbollah’s rockets with shipments of weapons and equipment via land from Syria to Lebanon. Since the convoys have often been the target of air strikes by the Israel Air Force, direct flights from Iran to Beirut could be a game-changer.

Israeli leaders have been warning about Hezbollah’s “accuracy project” for some time. In his speech to the U.N. General Assembly in September, Israeli Prime Minister Netanyahu said, “In Lebanon, Iran is directing Hezbollah to build secret sites to convert inaccurate projectiles into precision-guided missiles. Missiles that can target deep inside Israel within an accuracy of ten meters”.

On the morning of December 5th, we learned of a new threat. The Israel Defense Forces (IDF) announced it discovered a Hezbollah terror tunnel that went under the border with Lebanon and extended forty meters into Israeli territory. On December 11th, a third tunnel was discovered.

According to IDF officials, the purpose of the tunnels is to infiltrate large numbers of Hezbollah operatives into northern Israel in order to kidnap and murder civilians and occupy parts of the Galilee. As a result of these discoveries, Israel launched what it calls “Operation Northern Shield” whose goal is to locate and destroy the Hezbollah tunnels.

These threats are directly tied to the government of Iran which provides Hezbollah with an annual budget of $800 million dollars and an endless supply of weapons. This is no secret.

In the summer of 2016, Hezbollah leader Hassan Nasrallah said, “We are open about the fact that Hezbollah’s budget, its income, its expenses, everything it eats and drinks, its weapons and rockets, are from the Islamic Republic of Iran,”.

For decades, leaders of both Hezbollah and Iran have made repeated threats to the destruction of Israel and they constantly work to carry out these threats. That is why the business as usual with Iran policy of European nations- especially Austria, Germany and Italy- raises a serious question. Given their history, how can the leaders of these countries be indifferent to threats to genocide against the Jewish state and remain silent in the face of evil?

There is no doubt Iranian leaders interpret the silence of the Europeans as a green light to continue to advance their dangerous strategy while benefiting from the economic rewards of trade to finance their ambitions.

Beyond the threats to Israel, Iran and Hezbollah are directly responsible for the tragedy of Syria. The massive economic and military support they provided to prop up the brutal regime of Syrian dictator Bashar al-Assad created a humanitarian disaster. The human cost: more than 500,000 dead and more than five million refugees.

To be fair, Austria, Germany and Italy are not the only EU countries doing business in Iran. And direct airline flights from these countries to Iran are only a small part of a much bigger picture.

Since the Iran nuclear deal was implemented in 2016, trade with Iran is permitted under the terms of the JCPOA so long as Iran lives up to the narrow terms of the deal. Yet when discussing trade with Iran, there should be a higher standard for nations beyond a simple cost-benefit analysis.

We can understand why China or Russia would do business with Iran, but what happened to the liberal values of European nations that claim to support peace and human rights?

By contrast, even before the Trump administration re-imposed economic sanctions on Iran, U.S. companies were largely forbidden to do business in Iran because it is designated as a State Sponsor of Terror by the U.S. State Department. This has been the bi-partisan policy of the United States under both Democratic and Republican administrations since the 1980’s.

The organization that I represent, United Against Nuclear Iran (UANI), has been making the case that even after the nuclear deal, Iran should not be open for business. In essence, we have been making the case against indifference to Iran’s support for terrorism and its destabilizing activities in the Middle East.

Europe’s indifference has emboldened the leaders of Iran to pursue their radical agenda through terror proxies like Hezbollah. Their indifference allowed for the tragedy of Syria, and it is now allowing Iran and Hezbollah to create a powder keg on Israel’s northern border that could explode at any time. Therefore, it will be up to us to send a much different message. Through our cumulative decisions as individuals about where we invest our money and on what airlines we choose to fly, we have the power to say: so long as Iran sponsors Hezbollah, no more business as usual.