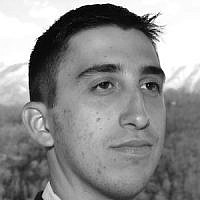 The Blogs
Micha Kerbel
Apply for a Blog
Advertisement
Please note that the posts on The Blogs are contributed by third parties. The opinions, facts and any media content in them are presented solely by the authors, and neither The Times of Israel nor its partners assume any responsibility for them. Please contact us in case of abuse. In case of abuse,
Report this post.

Tonight begins the holiest 25 hours of the year for Jewish people around the world. It will be a period of deep introspection. We will look inward in inspection of our deeds from the past year to determine what we did right, and how we can improve. We will ask our loved ones for forgiveness, and we’ll even extend our most sincere apologies to anyone we’ve done wrong. Since last Yom Kippur, I have plenty of good and bad to reflect upon.

There are several things I will atone for like doing a better job at keeping in touch with my family, being a better listener, demonstrating honesty even when it is not easy, and the list goes on.

However, with all of these things I can apologize for and strive to improve, the one thing I will not atone for is being a Zionist.

I will not atone for any of these things, because despite names I’ve been called by fellow students I am proud to stand with Israel. Despite the accusations made against Israel on campus, like drawing illogical parallels between Israel and South African apartheid, which only belittles those who suffered from South African apartheid, I am proud to be an Israel advocate. No matter what anyone tells you, supporting Israel does not contradict supporting human rights. Being pro-Israel is not mutually exclusive with advocating for Palestinian rights.

As you reflect this year during Yom Kippur at synagogue, home, or wherever you find yourself, I hope that you will remember your identity as a Jew. Reflect on the values that are important to you. Never apologize for being who you are and never atone for supporting Israel. Personally, there are many things that I hope to change and improve upon this year, but apologizing for being a Zionist is not one of them.

About the Author
Micha, an alumnus of the Nativ College Leadership Program in Israel and former StandWithUs Emerson Fellow, studies political science at The Ohio State University. He also serves as a chairman for Zeta Beta Tau fraternity Nu Chapter and as an executive board member for Buckeyes for Israel, his campus's exclusive pro-Israel organization. To reach Micha please e-mail him at M.E.Kerbel@gmail.com.
Related Topics
Related Posts
Comments