The Blogs
Alan Silverstein
Apply for a Blog
Advertisement
Please note that the posts on The Blogs are contributed by third parties. The opinions, facts and any media content in them are presented solely by the authors, and neither The Times of Israel nor its partners assume any responsibility for them. Please contact us in case of abuse. In case of abuse,
Report this post. Wednesday, November 3 was Rosh Hodesh Heshvan. As has been the custom for many years, Women of the Wall conducted group prayer in the women’s section of the Kotel. They were joined by women and men carrying Torah scrolls as part of a protest against the inaction of the Netanyahu government in implementing Natan Sharansky’s Solomonic Kotel compromise. The Sharansky Plan was endorsed by the World Zionist Congress late Fall and then approved by the Knesset in January 2016. The compromise agreed to retain the current portion of the Kotel as an Orthodox synagogue, along with building a similar-size pluralistic prayer section of The Wall in the area known as Robinson’s Arch. The Plan was accepted by most members of Women of the Wall, by the Reform and Conservative/Masorti Movements as well as by many modern-Orthodox leaders. As noted by Rabbi Shlomo Riskin, “Judaism in general and the Western Wall in particular are precious and important, it is impossible to leave the future of Judaism to Orthodox Jews alone.”

Regrettably, Haredi parties within the fragile Netanyahu coalition have successfully frozen the Robinson’s arch project. Month after month, leaders of the Reform and Conservative movements have reached out to Israeli government officials. They have demanded action but to no avail. Left with no alternative, on Rosh Hodesh Heshvan they joined with WOW in a public display of disapproval. The display was met with hostility and at-times violent assaults by Haredim in the vicinity. The opponents claim that they will not tolerate any change in the “age-old” status quo.

Ironically, battles over maintaining “the status quo” at the Kotel are not new. They occurred as early as 100 years ago. In 1911, certain elements among the  Jewish worshippers broke with long-standing Turkish policy by attempting to erect a temporary Mechitza to separate men and women during moments of collective prayer. Due to Arab complaints, the Turkish officials reinforced their “status quo,” insisting that no mechitza was permitted. This challenge against Ottoman regulations resurfaced once again in the late 1920s, once the British Mandate had assumed governance.

As recorded by eye-witness Yosef Yoel Rivlin: “Early in the morning the day before Yom Kippur we would go to the Western Wall. That was the time when it was most crowded there, for people from all the different groups would assemble… Sephardim, Ashkenazim, Yemenites and Bucharians. At first there was no partition separating men and women at the Wall [even on Yom Kippur]; the early Sephardim and Perushim did not think of it. But, when the number of [Ashkenazic] Hasidim grew and the group of `guardians of modesty’ sprang up, they erected a mechitza in the northern corner of the Wall on the day before Yom Kippur.”

In response to this violation of the “rules,” a British officer was stationed at the Wall to enforce pre-existing customs. Open confrontation erupted on the eve of Yom Kippur in 1928. With a sizable number of Jewish worshippers in attendance, in protest mode a mechitza illegally was put into place.  This act prompted Arab objections and led to British intervention. After failing to peacefully persuade the Jews to take down the Mehitza, the British police forcibly removed the screen. The incident inflamed Arab nationalist groups. It was a factor in fomenting subsequent Jerusalem-centered Arab riots in 1929.

The no-mechitza “status quo” at the Kotel continued until the British departure in 1948. Nevertheless, men and women and children of all types visited the Wall since it served as a unifying focus for both religious and national Jewish sentiments. Going back to the days of Herzl, the Kotel symbolized the Unity of the Jewish People. As a 1935 guidebook recorded: ”On Tisha B’Av,  a veritable Jewish migration to the Wailing Wall sets in after dark. The thousands slowly and silently pass before the ever-lasting stones far into the night; young and old, believer and free-thinker, the Old Yishuv from the Street of the Jews and the Halutzim form the colonies and Kvutzot. And if anywhere at all, here and at this hour you can feel that Am Yisrael is alive.”

With the Jordanian conquest of the Old City in 1948, not merely a mechitza but all forms of Jewish visitation at the Wall became prohibited. Within 48 hours of Israel’s acquisition of sovereignty of the Old City [June of 1967] and in time for Shavuot, a portion of the adjacent Mughrabi neighborhood was cleared away. The additional space provided both a Kotel Plaza and extended the accessible portion of the Western Wall. In the absence of a Mehitza, 250,000 men and women streamed to the Wall as an expression of solidarity, for men, women and children standing as One. 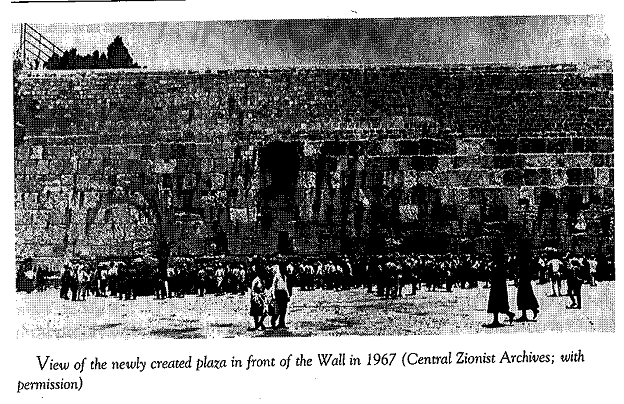 With Jewish sovereignty affirmed, unfortunately control of The Wall was not placed not into the hands of Jewish Agency, representative of both Israeli and World Jewry. Instead, on July 3, IDF Chief Rabbi Shlomo Goren handed control of the Kotel to the Orthodox Ministry of Religion. Consequently on July 19, 1967, a mechitza was put into place. For the first time in its history, the Kotel exclusively became an Orthodox synagogue.

Activities that previously had not existed at the Kotel became regarded as “the status quo.” As noted by Dr. Shulamit Magnus, a leader of Women of the Wall, “The Wall was liberated – for Jews who are men – in 1967, with abundant new customs created since then, but only on the men’s side. To claim that women cannot pray there as a group, with voice, Torah, talit, tefillin, because these are innovations, “violations of custom,” is absurd. Men doing any of this, or holding bar mitzvah or wedding ceremonies, is an innovation. So is the mehitsa diving men and women. Shall it be abolished on grounds of being an innovation in custom?”

The Kotel like the State of Israel belongs to Jews of all religious and secular views. The will of the World Jewry, expressed by the World Zionist Congress, and by the citizenry of the Jewish State, affirmed by Knesset ought not be obstructed by Haredim who do not want to permit views other than their own.  As Natan Sharansky affirmed in offering his Plan: “[There is an] urgent need to reach a permanent solution and make the Western Wall once again a symbol of unity among the Jewish people, and not one of discord and strife.” In his words, we need “one Western Wall for one Jewish People.” May we be privileged to witness the return to the Kotel’s true “status quo” as a comprehensive symbol of Am Yisrael!

About the Author
Rabbi Alan Silverstein, PhD has been the religious leader of Congregation Agudath Israel in Caldwell, New Jersey since 1979. From … 1993 to 1995 he served as President of the International Rabbinical Assembly of the Conservative Movement. From 2000 - 2005 he was President of the World Council of Conservative/Masorti Synagogues. He served as Chair of the Foundation for Masorti Judaism in Israel from 2010-2014. He currently serves as the president of Mercaz Olami. He is the author of It All Begins With A Date: Jewish Concerns About Interdating; Preserving Jewishness In Your Family: Once Intermarriage Has Occurred; as well as Alternative to Assimilation: A Social History of the Reform Movement in American Judaism, 1840-1930.
Related Topics
Related Posts
Comments