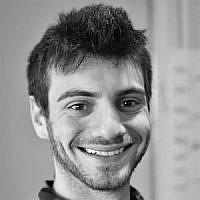 The Blogs
Yonatan Rabinovitch
Apply for a Blog
Advertisement
Please note that the posts on The Blogs are contributed by third parties. The opinions, facts and any media content in them are presented solely by the authors, and neither The Times of Israel nor its partners assume any responsibility for them. Please contact us in case of abuse. In case of abuse,
Report this post.

For a start-up nation, the online shopping experience in Israel leaves much to be desired. In many developed nations, online shopping has already become a seamless part of daily life. Yet when it comes to online retail in Israel, (grocery shopping excluded), the choices are minimal, the shipping is slow, and packages usually have to be picked up at a post office — a huge barrier to making online shopping a preferred option. Oh, that’s assuming your package arrives at all. One study by Haaretz found average wait times for a package to be 26 days, and at least one never showed up. That’s the stuff of nightmares to an Amazon Prime devotee like myself.

In the US, where reliable and abundant e-commerce options are available, the collapse of traditional physical retail already began years ago. Every major retailer from Abercrombie to Macy’s to Barnes & Noble are struggling against the encroachment of internet giants such as Amazon. There have been massive layoffs in retail as thousands of branches from dozens of chains close down. Malls are rapidly emptying. The message seems quite clear — retail’s death is accelerating, and online shopping will reign supreme.

Meanwhile, in Israel, it’s largely business as usual. Malls are full, and it seems every development includes plans for new shopping areas. Announcements, like this one about Footlocker opening three locations, are big news. Yet in many places, stores like footlocker are closing their doors.

The mediocrity of the Israeli online shopping experience is not due to lack of interest from the Israeli consumer. In fact, Israel is number one in the world for percentage of internet users making online purchases (which are made largely are through foreign companies). Online grocery shopping has been so popular that Shufersal is actually considering closing branches entirely in favor of the internet. Rather, most of the barriers to a robust e-commerce market come from either the government, which imposes import taxes on purchases of over $75, or the postal service, which is totally unequipped to handle the increasing volume of packages (though they are trying).

While the e-commerce revolution has benefited other countries, Israel in particular stands to gain enormously from it. When (when, not if), the revolution happens, it will significantly change the daily life of all Israelis in two important ways.

The first is that more real estate will be available for new things. Initially, many brick and mortar stores will close, and probably at a more rapid rate than has happened elsewhere, thanks to Israel’s appetite for the internet. While store closures and layoffs are certainly painful on an individual level, this process is ultimately good for everybody. In Israel, space is precious and real estate expensive, and therefore the average size of retail spaces is much smaller than in larger countries. As small stores offering necessities which can be easily bought online (electronics, clothes, home goods) empty out, supermarkets and other Walmart-esque chains will be able to physically expand, offering more variety to the Israeli consumer. As rent prices decrease, more creative, niche business will be able to open. Massive malls will be able to be repurposed for other things, such as community spaces. While in the US the revolution has left strip malls empty and abandoned, in Israel, there is fortunately not enough space for that to happen.

Secondly, and most importantly, it will drive the cost of living down more than anything in the past. The moment a business has to compete with something like Amazon, prices will magically come down, or that business will fade into irrelevancy. Israel generally suffers from a lack of competition, and the internet is a surefire way to change that. Instead of piecemeal efforts to lower a tax here, or create a price ceiling there, online shopping will balance the economy quickly and efficiently.

If the government is serious about these issues, they should make significant efforts to bring high quality e-commerce to Israel. Instead of patting themselves on the back for reducing the tarrif on shoes, meaningful reform in the e-commerce sector just might bring small miracles. If we can’t make peace, let’s at least get the online shopping right.

About the Author
Yonatan Rabinovitch made aliyah in June 2017, after graduating from Queens College in New York. Among his hobbies is studying hot-topic issues in futurology as they relate to Israel.
Related Topics
Related Posts
Comments