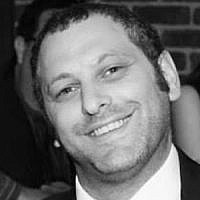 The Blogs
Jonathan Bash
Apply for a Blog
Please note that the posts on The Blogs are contributed by third parties. The opinions, facts and any media content in them are presented solely by the authors, and neither The Times of Israel nor its partners assume any responsibility for them. Please contact us in case of abuse. In case of abuse,
Report this post.

I want to thank you from the bottom of my heart. Although it is not your intention, your words and actions are helping to rebuild my homeland, Israel.

Whenever you go on a vicious protest, or call for Boycott, Divestment and Sanctions; or send out a revolting tweet, though it saddens my heart, you make Israel stronger. Diaspora Jewry, who are otherwise comfortable in their jobs and in their homes, are realizing that there is only one place in the entire world that makes them feel wanted.

To my anti-Semitic Arab friend, your hatred, discrimination and violence, in Yemen, Syria, Iraq, Morocco, Libya and other Arab states forced 1 million of my Sephardic brothers to leave your lands and journey to the nascent State of Israel. Had you respected us, the population of Israel would have been far smaller; and on paper, your armies may have had a greater chance of wiping us out. So, thank you for providing us with the manpower and rich culture that has been so vital to our survival.

To my anti-Semitic Fascist friend, your heroes wiped out half my nation, but from the ashes, our battle hardened people gained the strength to withstand Arab and European hatred; and renew ourselves once more. Though your star is not as strong as once it was, do not worry, you have successfully passed the baton of anti-Semitism to the Far Left.

Yes, my anti-Semitic Far Left friend. Sadly, some of you are my own brothers and sisters, so misguided it brings tears to my eyes.  Take pleasure, you are the modern builders of the State of Israel. Your irrational hatred allows you to inexplicably march with Muslim radicals on the streets of the USA, France, Great Britain and beyond. Of course you say you believe in human rights for all, but it never seems to include Jews. And while we are on the subject, why did you not march when tens of thousands were killed by ISIS in Syria and Iraq or when hundreds of girls were kidnapped by Boko Haram? Why have we not seen your outrage when Russian forces attacked the Ukraine and downed a passenger jet? Is it because you care less for human rights than you claim?

And don’t tell me that you are “Not anti-Semitic, just anti-Israel” because you and I both know the two are one – and I will prove it to you.

And don’t tell me that you are “Not anti-Semitic, just anti-Israel” because you and I both know the two are one – and I will prove it you.

Firstly, though you may find it confusing (and that is your problem, not mine), us Jews define ourselves as a religion, a race and a nation.  As a nation, we have the same right to a homeland as any country in this world.  When you deny us that basic right, you are also denying us the right to self-determination.  By doing so, you classify yourself as an anti-Semite.

Secondly, Jewish prayers, biblical texts and philosophy have Jerusalem and Israel at its core. Many of our commandments can only take place in Israel.  Our festivals are ideally celebrated in Jerusalem.  I could go into further detail but it would take a 2-3 volume book set to illustrate the true religious depth of connection to this small piece of land.  So go ahead, deny my right as a Jew to live in my homeland, practicing my religious beliefs, but by doing so, you classify yourself as an anti-Semite.

Thirdly, if you ever got your way and an effective movement was setup to push us off our land, there would inevitably be a huge and bloody war. In this war, millions of Arabs and Jews would die – just to fulfill the dictates of your dogma. So go ahead, continue your delegitimization of Israel and by doing so you mark yourself as an anti-Semite.

The Jewish people are home. We have fulfilled prophesy allowing the desert to bloom. Israel is also a vibrant economy, has beautiful scenery and is multicultural like no other place on earth. Despite the wars, Israel is indeed an attractive place to live, but I am also so grateful for your contribution. Your angry demos, racist tweets, repugnant Facebook pages, hate speech, pamphlets, intimidation on campus, fabrication of events, acts of violence and murder, and so on, though painful, make my nation, Israel, stronger.   We are returning home. Thank you, dear anti-Semite. Thank you.