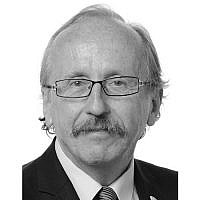 The Blogs
Peter Niedermuller
Apply for a Blog
Advertisement
Please note that the posts on The Blogs are contributed by third parties. The opinions, facts and any media content in them are presented solely by the authors, and neither The Times of Israel nor its partners assume any responsibility for them. Please contact us in case of abuse. In case of abuse,
Report this post.

It was my great pleasure to have been invited to the conference on The Fight Against Antisemitism on the 11th of February at the European Parliament in Brussels. I was honored to listen to your powerful speech as well. The discussions and the signs of broad political and societal dedication against antisemitism had a great impact on me. This fight is of exceptional importance today, when, sadly, antisemitism seems to be on the rise in several member states of the European Union. I truly believe this requires us to stand united, and to investigate and analyze the reasons and roots of this new wave of antisemitism. It is crucial for us to be able to take effective action against all forms of antisemitism, and stop looking for scapegoats.

Namely, that I found everything that Mr. Szabolcs Takács, the Hungarian Minister of State for EU policies said on a panel during the conference shocking. Mr. Takács believes there is a direct correlation between migration (under which he includes refugees), radical Islam and the rise of antisemitism. Furthermore, he spoke about people coming from “inherently racist countries.” This statement, however, is only partly true, to say the least. We are deluding ourselves if we believe the sole reason for the rise of antisemitism is immigration or refugees.

While I am sure, there are people among these refugees who hold these sentiments, there are many who don’t show any sign of antisemitism. I firmly believe, that the only goal of these awful generalizations is to further such already existing conflicts. Clearly, I do not wish to minimize the importance of radical Islam and the irrational Jew-hatred inherently rooted in its terrorism. I can assure you, the European Union and the European Parliament has taken and is taking this threat very seriously. To prove its dedication, the Parliament created a Special Committee on Terrorism, that I was a part of as well. The purpose of this committee was to investigate the correlation of antisemitism and radical Islam, and it concluded that the EU needs to fight radical Islam with all means possible.

But what I find even more disturbing is the insidious political intent of Mr. Takács to try to stigmatize the Hungarian opposition as anti-Semitic. He claimed, that the “pro-migration, anti-Semitic left has joined forces with the far-right party, Jobbik in Hungary”.

Dear Mr. President, I have to speak up, as this is an utter lie. I can personally assure you, as the vice-president of one of the opposition parties of Hungary, Democratic Coalition, that there is no political cooperation between the Hungarian center-left, liberal opposition and Jobbik. The far-right party’s latest congress on the 2nd of February proves this as well, when the president of Jobbik stated they don’t wish to cooperate on a political level with these parties. It is true that Jobbik is also calling for the restoration of democracy, press freedom and independent judiciary in Hungary. Nevertheless, this is not political cooperation. Jobbik claims it has abandoned its past of racism and antisemitism and they relegated those politicians supporting these ideas (many of whom since have created their own, far-right party). I personally believe that as much as this might be true, Jobbik must still do more to make amends for its past. It owes an apology to those, mainly the Jewish and Roma communities, it kept under verbal and physical fear. Minister Takács accuses the left of antisemitism, while his party, Fidesz has repeatedly relied on collaboration with Jobbik in the Hungarian parliament. Furthermore, Viktor Orbán called Jobbik a philo-semitic party in 2017. Allow me to remind you of the words of the Hungarian prime minister, “‘We are fighting an enemy that is different from us. Not open, but hiding … does not believe in working but speculates with money; does not have its own homeland but feels it owns the whole world.” Nobody can misinterpret these old clichés. Mr. Takács’s goal in stigmatizing the left is only to simply alienate the political opponents of the Hungarian government and to abandon debating within the democratic framework.

Mr. Takács proudly stressed how the Hungarian government has announced zero tolerance towards antisemitism. This is true, at least in their public statements. In reality however, this government gives significant funding to historical institutions it established that are working on rewriting Hungarian history from between the World Wars and relativizing the Holocaust. On the surface, the government acknowledges the responsibility of Hungarian society for the horrors of the Holocaust. The leader of one of these historical institutions however, playing with terminology, claimed, the 1920 numerus clausus law, that limited the number of Jewish students approved into Hungarian universities, wasn’t an act of deprivation of rights, but only a restriction of rights. The same state-funded historian claimed in 2014 that the 1941 deportation of Jews seeking refuge in Hungary to Kamenetz-Podolsk has nothing to do with the Holocaust. Moreover, he claimed that the deportation and later massacre was only an act of “alien policing procedure”, since these Jews had no Hungarian citizenship. I have never heard any governmental statements that would have condemned these views.

I can also point to the issue of the planned new Holocaust museum in Budapest, the House of Fates, that fits the same ideological trait. I am sure you are familiar with the serious concerns surrounding this project. I need to remind you, that the problem here is not simply differing scientific and historical approaches or angles. The problem here is the attempt to divide Hungarian Jewry and relativize Hungarian society’s responsibility towards the Holocaust. As on the same panel at the conference, Mr. Paul Shapiro of the U.S. Holocaust Memorial Museum stated, “anti-Semitism can’t be tackled effectively when national governments are engaging in systematic efforts to distort the history of the Holocaust”. For its own selfish political goals, the Hungarian government is trying to turn Jewish communities against each other on the issue of the museum. I find this both politically and morally deeply condemnable.

Dear Mr. President, your letter concerning the relations between the Hungarian left and Jobbik gained a huge audience in the right-wing and far-right media in Hungary and served as a tool to further stigmatize the opposition. It is clear to me, that this was not the intention of your letter and I also deeply understand your concerns as well. However, I can most definitely assure you, that there is no trace of anti-Semitism in left wing parties in Hungary. I also believe that the claims of Mr. Takács are not only an interior Hungarian issue. They are part of a broad political intent of right-wing parties to appear as the sole defender of Israel, the Jewish State and the Jewish people, while portraying the left as anti-Semitic, anti-Israel and anti-Jewish.

I am sure, that neither you, Mr. President, nor the institution under your leadership approves of this cynical, untrue claim. I don’t wish to deny, that in Europe there are left-wing parties, that tolerate some of its members’ anti- Semitic remarks. Most of my colleagues and I in the European Parliament, however, strongly condemn any of these comments. I would also like to make it clear, the underlying majority of the European left is firmly against antisemitism and is not anti-Israel. Even if it doesn’t always agree with the policies of the current Israeli government. It is my conviction, that antisemitism is a cancerous poison, a stain on modern European civilization that needs to be fought against by every democrat either on the left or on the right. As a left-wing politician, this is what I have been doing and what I intend on doing in the future as well.

Thank you for your time and for considering my letter.

Yours with honest and great respect,