In an interview with Al-Manar, affiliated with the Islamic Republic, Mahmoud al-Zahar, a senior member of Hamas’ leadership, admitted in the last days of 2020 that he had received $ 20 million in luggage from Qasem Soleimani, a terrorist in the IRGC in 2006.

The remarks of this member of the Hamas terrorist group were a seal of approval for what the Iranian people have said many times and which the mullahs’ government calls baseless rumours; It means looting the property and capital of the Iranian people for the benefit of terrorist and militant groups. 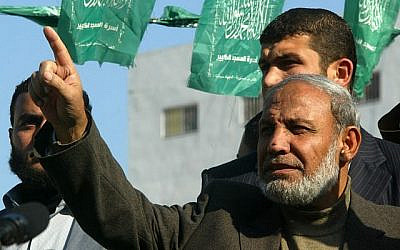 The fact of the matter is; While the Iranian people are getting poorer every day, the regime of the Islamic Republic is still feeding the terrorist groups and prefers to spend the same amount of money left in the country’s treasury.

The Hamas official’s recent remarks about the dollar-packed suitcases that world-class terrorist Qasem Soleimani gave to a delegation from the group in 2006 show once again what informed observers in the region and the Iranian people have been doing in street protests for ten years. From the past to the present day, talking about sending money to Lebanon and Palestine is wrong; it is beyond the truth.

“Neither Gaza nor Lebanon” chanted “No to Gaza, no to Lebanon” during the 11-year-old demonstration, which was accompanied by bloody repression, in protest of the country’s waste of funds spent on financing terrorist groups. 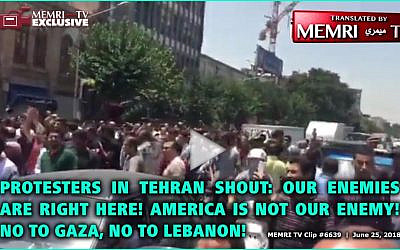 Footage posted on social media on June 25, 2018, showed protesters in various locations in Tehran marching and shouting slogans like “No to Gaza, no to Lebanon! I will give my life to Iran!” and “Death to the dictator.” In one demonstration, the protesters shouted “Our enemy is here! It is a lie that America is our enemy!”- Memri TV

The Islamic Republic leader, Ali Khamenei, later said in a statement in response to the Iranian people’s slogan: “Those who chanted this slogan were ignorant and unaware.”

“Both Gaza and Lebanon happen to be against the wishes of the Iranian protesters,” he said.

With these remarks, the Supreme Leader of the Islamic Government confirmed that sending money to militant groups is real and announced the Islamic Republic’s determination for this support and its continuation.

Organized looting
Just one example of the Iranian regime’s “money laundering” of Palestinian terrorist groups in 2006 shows that vast sums of money from the Iranian treasury were given to Hamas instead of being spent on development and poverty alleviation the country. However, many villages in Iran do not have access to drinking water and school for education, and many small towns in Iran do not even have a hospital equipped to treat and hospitalize patients, and in most cases, patients after a long-distance and timely treatment. They do not arrive and die in the middle of the road.

The story of the sack full of dollars, which was recently revealed by a Hamas official, is just one example of the generosity and donations that the regime of the Islamic Republic, through Qasem Soleimani, gave to the Palestinians 15 years ago to build rockets and Be a bomb to kill. 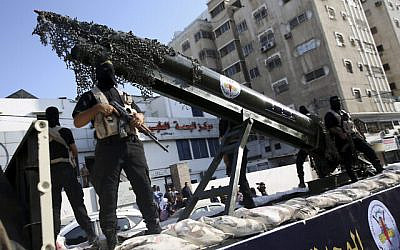 Palestinian members of the Al-Quds Brigades, the military wing of the Islamic Jihad terrorist group, parade with a replica rocket on a truck during a march to show loyalty for the Iranian-backed Palestinian movement’s newly elected leader Ziad al-Nakhalah during a rally along the streets of Gaza, Thursday, Oct. 4, 2018. (AP Photo/Adel Hana)

The story is more painful than this, and in fact, it looks like organized looting. “We told Qasem Soleimani in 2006 that we had problems paying salaries in Gaza and providing social services,” said Mahmoud al-Zahar, a Palestinian official who spoke to Al-Manar (the official media outlet affiliated with the Iranian regime). Iran brought us $ 20 million, including suitcases of dollars; he wanted to give us more money ($ 50 million), but we were nine, and each bag was 40 kilos, and we nine could not carry it! »

Soleimani, the terrorist who did not show mercy to his fellow citizens!
If we ignore most parts of Iran’s deprivation and poverty, just a brief look at the birthplace of Qasem Soleimani, the terrorist of the Islamic Republic, is enough to realize that people with terrorist thoughts are not even willing to do good to their fellow citizens. Kerman, the province where he was born and raised, faces staggering poverty and deprivation.

In most cities of this province, there is no safe drinking water, and from time to time, water trucks deliver water to the villages by tanker, and people run after the water truck with a container.

In many parts of the province, the lack of schools has caused students to travel miles from dangerous mountainous areas to get to school. Other deprived regions of Iran are not doing well. While the Islamic Republic regime sells billions of dollars of oil every year before and before the escalating sanctions of the last two years, during the four decades of ruling Iran, many In Sistan and Baluchestan, near the Pakistani border, people continue to fetch water from the river. In a few cases, little girls who went to fetch water were cut off by crocodiles.

In southern Iran and the three provinces of Khuzestan, Bushehr, and Hormozgan, people live hard lives. 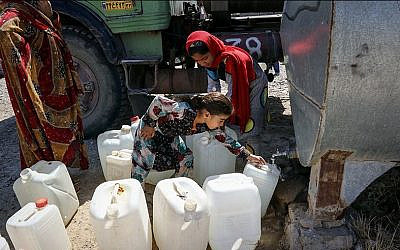 In Khuzestan, which is lying on oil and gas, after a few hours of simple rain, the cities’ sewage rises, and people practically float on a sea of human waste. Nearly 20 years ago, the World Bank paid a multimillion-dollar budget to the Islamic Republic to install Khuzestan sewage, but this money has disappeared, and no official in this regime is willing to give a convincing explanation about the fate of the funds received from the World Bank.

Despite these great sufferings, the Islamic Republic regime has tried to turn Qasem Soleimani into a false mythical hero with misleading propaganda. At the same time, during all the time that the Iranian people were suffering and needy, Soleimani, instead of With the windfall oil dollars are given to him by the Supreme Leader of the Islamic Republic, to develop Iran, gave billions of dollars to foreign terrorist groups to commit murders, thus paving the way for the transfer of the Iranian nation’s assets to terrorists.

Despite widespread sanctions over the past two years for not spending Iran’s income on terrorism, the Islamic Republic leaders continue to spend the rest of the Iranian people’s capital on the development of evil and the financing of terrorists. The $ 4 million for Hamas, which Israel recently confiscated, is just one of them.

Studies show that, according to semi-official government sources in Iran, billions of dollars a year reach proxy groups backed by the Islamic Republic through various means, including physical movement (luggage) or barter with money changers. Quds has been responsible for these transfers.

Three years ago (2018), the Iran Action Group announced the $ 700 million annual budget of Hezbollah in Lebanon, but that is not all, and Lebanon, Gaza, and Yemen seem to be only a small part of the Iranian people’s information about the waste of their capital. Several proxy terrorist organizations in an octopus empire devour the Iranian people’s money, money that can be spent on development and poverty alleviation in Iran. These are other than cases directly spent on weapons development and drone development, and related research departments.

Authoritative sources say that since 2012, only $ 50 billion in free oil has been supplied to Syria by Iran. Iranian opposition sources, who have access to credible information within the Islamic Republic, also say that Ayatollah Khamenei has direct control of Iran’s foreign exchange resources and that wherever there is talk of spending for the Iranian’s welfare people, he is considerably reluctant to allocate. Currency opposes. An up-to-date example of this is the lack of currency allocation for the purchase of poultry feed, which led to a multiplication of chicken prices and the egg crisis.

According to the report, the reason for the Iranian leader’s opposition to allocating foreign exchange for the import of essential goods and encouraging people to consume low-quality domestic products that are produced at exorbitant costs is that Khamenei needs foreign exchange resources to strengthen terrorist proxy groups. The welfare of the Iranian people is meaningless to him. In January 2020, the Supreme Leader of the Islamic Republic ordered the direct withdrawal of 200 million Euros from the Foreign Exchange Reserve Fund of Iran, which he controls, in favour of terrorist groups, but when the prices of necessary items and goods inside Iran, such as meat, poultry, and eggs became high. Khamenei does not take any action and does not even allow the withdrawal of currency to buy chicken food, leading to a boom in production and cheaper goods.

Currently, dozens of Iranian terrorist proxy groups in Iraq, Syria, Yemen, Lebanon, Gaza, and other regions, which also have several sub-branches, are dependent on the strong financial support of the Islamic Republic regime to collapse; Groups such as Hezbollah in Lebanon, Hamas, Islamic Jihad, Houthis in Yemen, Popular Rally, Hezbollah in Iraq, Companions of the Cave, Sarayr, Books of Khorasan, Books of Imam Ali, Harakat al-Najba, Meeting of Abu al-Fadl – The terrorist Qasem Soleimani created them by embezzling oil dollars or money sent by Obama, and also the newly established parties in Iraq to take over the government of this country are considered direct and indirect mercenaries of the Islamic Republic. 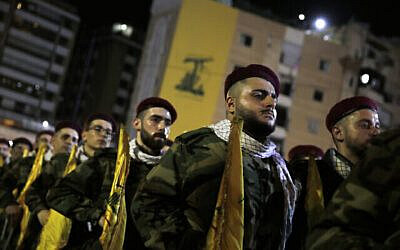 Hezbollah fighters stand in formation at a rally to mark Jerusalem day or Al-Quds day, in a southern suburb of Beirut, Lebanon, Friday, May 31, 2019. (AP Photo/Hassan Ammar)

Mercenary fighters finance the personnel salaries of the latter. Also, allocating foreign exchange to supply raw materials for making weapons in ammunition workshops and training people to take political positions is one of the overhead costs imposed on the Iranian nation to become more and more in poverty and hunger. Despite the embargo on Iran, a problematic situation has been created for the Islamic Republic leaders, but they increase the pressure on their people to afford these groups.

While Iranian households are struggling to make ends meet, the Islamic Republic regime continues to pursue the false dream of dominating the region. It seems that this approach of the administration of the Islamic Republic, that is, spending exorbitant costs to support terrorist groups instead of trying to improve the lives of the Iranian people indicates the anti-people of this regime and its efforts for evil expansionism in the region.