The Blogs
Paul Mirbach
Apply for a Blog
Please note that the posts on The Blogs are contributed by third parties. The opinions, facts and any media content in them are presented solely by the authors, and neither The Times of Israel nor its partners assume any responsibility for them. Please contact us in case of abuse. In case of abuse,
Report this post.

I became a Zionist on Yom Kippur, 1973, the year after my bar mitzvah. On that day, Israel’s peril trumped the holiest day of the year and I was struck by how much the fate of a little country, thousands of miles away, affected the lives of so many people, most of whom had never even set foot in it. The fact that I was at shul when the revelation struck me, is not coincidence. My Judaism has always been an essential part of my life. Although I am not observant in the Orthodox sense, observing those rituals and mitzvot which are meaningful to me, make me who I am. They define me.

I made Aliya in 1982 to a new kibbutz in the Galil, which we built from nothing but rocks and mud. I derive a deep sense of mission and fulfillment in having built my home and watching it flourish and develop. It is hard to describe the deep love I feel for Tuval and how a calmness and serenity settles over me every time I return to it, whether it be after a hard day at work, or after having been away for a few days.

Yet, I have always felt a yearning to once again experience the spiritual tranquility, the feeling of upliftment I used to feel when attending our shul in Bulawayo. I sometimes miss the hushed camaraderie and the welcoming atmosphere, the warmth of being washed with the refracted sunlight, as it shone through the beautiful stained glass windows. And, the feeling of togetherness one feels when praying together with people with whom you are familiar.

For years, I wished we would have a shul of our own, in the small corner of Paradise I call home, but we lacked a critical mass of like-minded people, for whom it was important. Now, at long last, we have a shul! 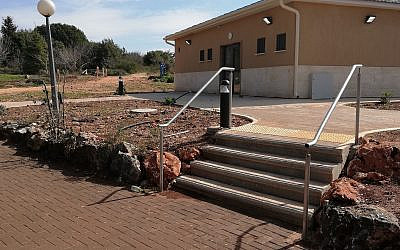 Our shul (own image)

It is a beautiful, new building. Which is about all we have, at the moment. With no budget to speak of, we have been trying to cobble together what furniture and equipment we can, from give-aways and donations. Some chairs donated by the kibbutz’s seminar center, a slightly rickety bookcase to stack our siddurim. We have a crude cupboard, which we use to house the Torah and a trestle table for the bima. And a carpet. But, with strategically laid tablecloths to give it an impression of respectability, we have made it work; more often than not, I lead the services, and I have felt a welcome sense of contentment. Sometimes I experience a tongue tip taste of the atmosphere I remember from my childhood days in shul.

This is where my story begins.

Last week, I received a Whatsapp message with pictures, that another community was willing to donate us an Ark and a bima. It looked perfect! It had been located by our Regional Council rabbi, who has been working tirelessly to help us establish our shul. All we had to do, was to find a way to fetch them.

From a settlement in the Shomron.

And I felt like I had been punched in the stomach, and all the air was knocked out of me.

(I have always been opposed to the Settlement Enterprise in the West Bank. For me, it as much an ideological issue, as it is a matter of very deep conviction and moral conscience, and my passionate desire for Israel to be both physically and morally strong. A light unto nations. It has less to do about whether we have a “legal” right to settle in the West Bank, and more about how we implement that right and the “rightness” of doing so. And, it is in this regard, that in my opinion the issue of settlements moves beyond the political and religious, into the realms of values, morality and conscience.

From the outset, in 1974, Gush Emunim and Benny Katzover cynically exploited the weak position of the Israeli government and the extremely brittle social fabric of the country in the aftermath of the Yom Kippur War, in order to establish an unsanctioned settlement in Sebastia, the West Bank. Knowing full well that the government could not afford further upheavals, they used the threat of such upheavals to extort the government into capitulating and allowing them to build a settlement there. There was no good faith in their action; only a narrow vision founded on religious fervor. It is the same, then and now.

Their success became the blueprint for building future settlements in the West Bank; first “capture” a hilltop or site and set up a temporary foothold. Then use political extortion and the threat of toppling the government or social upheaval, to force the government to legalize the settlement retroactively. Please note, that none of this has anything to do with whether Israel has a right to build civilian settlements in the West Bank. That is another question entirely. It has to do with the ugly, aggressive bad faith manner in which for 46 years they have pressured Israeli governments to approve their settlements, which were established without prior government approval, after the fact.

This is why I oppose Settlements).

However, this is not an article about my political beliefs. This is a deeply personal story about a personal dilemma and grappling with one’s conscience. If you feel inclined to attack me personally or politically, please stop reading now. However, if you can transcend that, and connect on a human level with my story, please continue.

I couldn’t bring myself to agree to accept it, the Ark. There was something deep inside me, which said, “You just can’t”. It felt like if I accepted the Ark, it would be a betrayal of who I am.

This is not the first time I have faced such a dilemma. About five years ago, I was approached by the regional manager of the company I work for, and was offered the opportunity to manage a project to finance the building of over 150 apartments. I was both honored and excited to be chosen to manage this prestigious project. However, as more details became known, it became clear that the project was in Northern Shomron. Which would mean that I would be taking an active part in implementing major settlement in the West Bank, going against all my convictions. I grappled with my conscience for the entire weekend, fully aware that refusing the project could place my career in jeopardy.

This is the nature of how the Settlement enterprise has become normalized into every aspect of Israeli society – from the arts, to business, to housing. People are forced to make a choice between their obligations of having to make a living and their consciences. The threat of them losing their jobs if they don’t compromise on their beliefs, erodes their resolve to take a moral stand. I just could not do it. It was almost as if something physical would not allow me to betray my conscience. The next day, I informed the regional manager that I would have to decline the offer. He asked me if I was aware that it could cost me my job, and reminded me of my age. With an inner strength which surprised even me, I looked him in the eyes and said, “All that is true, but in the morning I will still be able to look myself in the mirror”.

Now, it was happening again; Refusing to accept this donation would ruin our relationship with the Regional Council’s rabbi, who was instrumental in the building of our shul. Not to mention the very real possibility of losing a good friend and halting the development of the shul. However, by accepting the donation, it would mean acknowledging the legitimacy of the West Bank settlement which donated it, and feeling indebted to them. Which I could not do.

I consulted rabbis. My friend beseeched me to find a compromise. I really wanted to, and reached deep to find a way.

Then, I had a thought: What was the Ark’s provenance? If the Ark had a history, and its sojourn in this settlement was but one station in its life, then I could accept it and welcome its return to our borders, so to speak. If however, it was built especially for their community, with the express purpose of strengthening the community and contributing to its permanence, there was absolutely no way I would be able to accept it.

The committee agreed to my request. After three days, I received its provenance, and a sense of relief washed over me, like cool water after a long day under the hot sun. The Ark is about sixty years old, donated in memory of someone who had passed in 1959 – the year I was born – which I found serendipitous. In 1960 there were no settlements. Which meant its “birth” was in Israel. It had served other communities for twenty years at least, before it moved to the West Bank. Its stay there, was merely a chapter in its life, and now it could start a new chapter, in our shul. 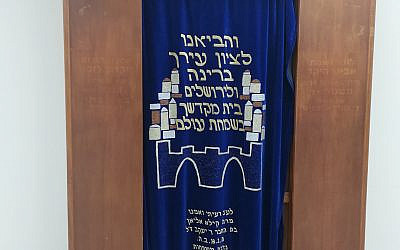 The new Ark (Own image)

Last week, we held a ceremony to welcome our Ark. We burned sage, and blessed Hatov VeHameitiv. We said a prayer for the return from a long journey. And now, it stands majestically, dominating the shul and giving it a sense of being a shul. It is beautiful, and it feels at home. As do I.

About the Author
Paul Mirbach made aliya from South Africa to kibbutz Tuval in 1982 with a garin of Habonim members. Together they built a new kibbutz transforming rocks and mud to a green oasis in the Gallilee. He served in infantry during his army service, serving in both Lebanon and the West Bank, including on reserve duty during the first intifada. Paul still lives on Tuval with his wife and two sons.
Comments