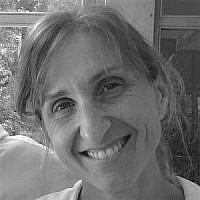 The Blogs
Chani Turk
Apply for a Blog
Advertisement
Please note that the posts on The Blogs are contributed by third parties. The opinions, facts and any media content in them are presented solely by the authors, and neither The Times of Israel nor its partners assume any responsibility for them. Please contact us in case of abuse. In case of abuse,
Report this post.

It would have began with Adam and Eve, however, being that fig leaves don’t weigh very much the pair had no need for backpacks when they got kicked out of the Garden of Eden. So lets jump to Avraham instead. He was told, in this weeks parsha to get up and go forth into the land that I command you. And so Avraham did. He rounded up his sheep and tents, threw his backpack on his back and off he went.

Following G-d’s command into the great unknown. And so it has continued through out our history. Jews are a wandering people. It’s one of the characterstics we are known for. We even have a plant named after us. Joseph’s brothers backpacked down to Egypt to find Joseph. Joseph even used Benjamin’s backpack to test his brothers when he hid his favorite chalice within. Jump forward a bit -the Jewish people backpack down to Egypt, jump forward a few hundred more and the Jews head right back out of Egypt, destined to now backpack through the sinai for 40 years. And that was just the beginning. We know our story. We know our history. In and out of Israel. In and out of countries throughout the world. Always wandering, never home. And our faithful backpacks always with us.

And then 68 years ago a miracle happened. After one of the most evil times in recent history when Jews were forced to pack a backpack and go forth into a horrific unknown, we finally found some salvation in the miraculous establishment of the state of Israel. We could now straggle back home. Our backpacks were pretty empty but we had a hopeful, bright and beautiful destination. We were backpacking toward the beginning of the regrowth of the Jewish people.

56 years after that tremendous event we, the Turk’s, packed our boxes and our suitcases, we sent our lift, we tightened the straps of our backpacks and we stepped onto that ElAl flight to come home.
Ever since then I have grown to love to watch our backpack nation. I love that come 3rd or 4th grade we pack up our kids to send them off on their first youth group overnighters-making sure they have a sweatshirt, requisite junk food and we even find room to squeeze in that extra can of tuna in oil, a napkin and matches so they can enjoy the Israeli delicacy of smoked tuna (oh hush up Smokey the Bear). We take pictures of them walking up the street with their over stuffed backpacks perched on tiny backs and we await anxiously for the arrival of the bus the next night, to hug and kiss their dirty, smelly bodies and hear all about their first backpacking in this country.

Over the years there are more over nighters-with school and with youth groups. As these kids get older they go off backpacking on their own, it being perfectly acceptable for highschoolers here to spend a few days north or south with a large packpack filled with provisions for a few days spent sleeping under the stars. And they get older still, these young backpackers-and the backpacks become olive green-our other national color. Driving near a bus or train station on a Friday or Sunday morning can be so satisfying for the interested backpack watcher such as myself. Those days are soldier/sherut leumi days. Every kid between the ages of 18 to about 22 or so is outfitted with a huge backpack-full of laundry, (friday-dirty, sundays-clean) and maybe some snacks to sustain and off they go-being dropped off or welcomed home at the trains or the buses. Taking up two seats -their mate-a backpack. There is something beautiful about the sight. Beautiful to watch all these kids living life out of a canvas bag. It seems even though we have our own home we can’t stop this need to pack up and move about. Both by choice and by neccesity.

Well there you are. We are a backpack nation. A wandering nation. It seems that it is actually a biblical commandment for us.

So here is what I have to say to the Jews in the Diaspora this week of Parshat Lech Lecha: This is it. This is the week. Check your local synagogues for your personal invitation arriving this very weekend. And then go home, pack your boxes and suitcases. Send your lift. Squeeze that one last roll of Bounty paper towels, that one last box of Ziplock baggies into your backpacks and then לך לך. Come home. We will be waiting here to help your arms out of that heavy load so we can put down these backpacks once and for all.

About the Author
Chani Turk made aliyah with her family in 2004. They have been living in Modiin ever since.
Comments