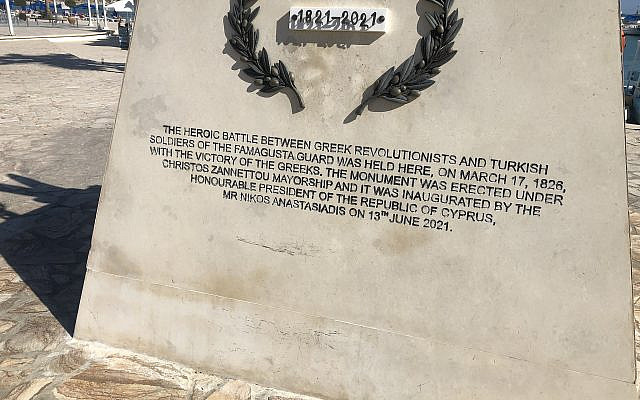 photo of memorial by Dorothea Shefer-Vanson 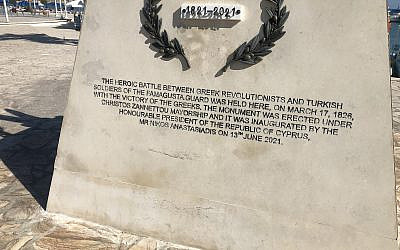 For a number of technical reasons we decided to hold our family celebration marking a milestone birthday in the neighbouring island of Cyprus. Family members came from various parts of Israel and the world, a hotel in the seaside resort of Ayia Napa was chosen and the dates for our four-day stay were selected. This last coincided with Israel’s eight-day festival of Sukkot (Tabernacles), when schools, colleges, universities and many places of work are closed.

The flight lasted about half an hour, and the drive to Ayia Napa took another half-hour, and then we were at our destination – a small hotel on the beautiful coast, part of a continuum of hotels. Our hotel overlooked the sea and the marina where yachts and fishing boats bobbed up and down with the waves and fishing and sailing excursions were offered.

From the moment we arrived (there were seventeen of us) the manager and the staff of the hotel went out of their way to please and meet our various demands. Tables in the dining area were moved so that we could all sit together. Our ‘birthday party’ meant that we more or less took over the hotel lounge, but no one complained. Balloons and champagne bottles were placed on the long table at dinner, a superb cake replete with pyrotechnics and candles was served with a flourish, and everything was done with grace and what seemed to be natural cheerfulness. Smiles were the order of the day everywhere we went and whatever we did.

The history of Cyprus goes back many millennia, and the island has been invaded and settled by many different nations and cultures, among them the Greeks and the Romans, of course. Its inhabitants appear to have learned to adapt to their checkered history, though the two main groups identify as either Turkish or Greek. In 1925 the British made it a Crown Colony, and established a strategic military base there. In 1960 the island became independent, but tensions between the two groups persisted, and in 1974 Turkey invaded the country. The resulting combat ended with the partition of the island into a Turkish and a Greek part, though the Turkish part is not recognized by the UN or any country other than Turkey.

While we were there we were not aware of any tension or hostility, and since the livelihood of a large proportion of the inhabitants rests on tourism it is evidently in their best interests to maintain the prevailing mood of optimism and charm. The climate is very similar to that of Israel (mostly Mediterranean), which leads most hotels to close down completely during the winter months. Along the promenade of Ayia Napa there are restaurants catering to every taste, but with special emphasis on fish and seafood.

Whether in the hotel or outside it, everyone is friendly, helpful and polite. And despite its volatile past Cyprus could well be called ‘Land of Smiles.’ It was something of a surprise, therefore, to come across a memorial plaque installed on the promenade in 2021 commemorating the victory in a ‘heroic battle between Greek Revolutionaries and Turkish soldiers of the Famagusta Guard’ held there in 1828 ‘with the victory of the Greeks.’

There is no avoiding the parallels with Israel’s own history and the conflict between two populations both laying claim to the same land. The Turks and Greeks of Cyprus seem to have settled into the modus vivendi of partition, with a clear line dividing the two parts of the island. At present there are no overt hostilities, and it would seem to suit both sides to keep the situation as peaceful as possible, enabling everyone to get on with their lives and livelihoods.