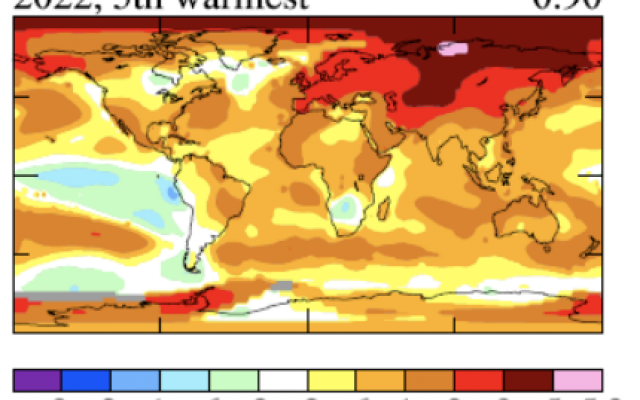 The world is heating up - January to June mean surface temperatures relative to 1950-80. (courtesy)

I’ve been out and about the last few days, and I am pretty sure that most would agree that it’s simply too hot to be outside in the middle of the day.  My thermometer reads 33 Celsius and 35 for a heat index.

Fortunately, our heat wave will be abating just in time for the 9th of Av, although the decrease in temperatures will only be a few degrees.

Heat waves seem to be coming more often than they go, and it’s quite interesting that the lengths some people will go to discredit the possibility (or rather likelihood) that the world is warming because of the production of greenhouse gasses from the burning of fossil fuels.

I saw this note (italics added): “Probably haven’t heard this on the MS [mainstream] news.  Current heatwave around the world is due to an unusually strong La Niña, associated with cooler than average Pacific surface water temps, and paradoxically predicting lower global temps for 2022 and a warming pause through 2023.  Not good news for climate activists.”
Yet, it’s pretty clear that the world is warming (see maps), and not everything is “bad news” for climate activists.  For instance, Hansen et al. write “It’s hot and getting hotter. The first six months of the year are about 0.2°C cooler than the first six months of 2016 and 2020, but that’s only because the current La Nina continues to cool the tropics. Global temperature is rising despite the La Nina. Earth is out of energy balance (more solar energy absorbed than heat radiated to space) by an astounding amount – more than any time with reliable data – so, within a few years, we will be setting new global temperature records.
Not to obscure the big picture, but it is technically true that the current heat wave around the world is due to cooler Pacific sea surface temperatures. But this doesn’t imply that all is okay save for the occurrence of La Nina.  Rather, the global circulation pattern of which La Nina is a part leads to the transport of heat from the subtropics and deserts to midlatitudes.   Moreover, the normally hot places of the world have become hotter and these places are “sharing” their heat with places that most people live. Add this heat to the general warming and most places where people live become intolerably hot.
And that’s not good news for us.
About the Author
Dr. Barry Lynn has a PhD in Environmental and Atmospheric Sciences. He has an undergraduate degree in Biology. He is a researcher/lecturer at the Hebrew University of Jerusalem, and is the CTO of Weather It Is, LTD, a weather forecasting and consulting company.
Related Topics
Related Posts