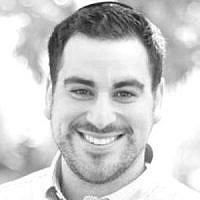 The Blogs
Eitan Rosenfeld
Apply for a Blog
Advertisement
Please note that the posts on The Blogs are contributed by third parties. The opinions, facts and any media content in them are presented solely by the authors, and neither The Times of Israel nor its partners assume any responsibility for them. Please contact us in case of abuse. In case of abuse,
Report this post.

At the beginning of every Hasbara Fellowships program, I take our new crop of fellows to the Dale Chihuly glass sculpture that hangs down the main entrance of Aish Hatorah. It’s a magnificent piece composed of hundreds of individually blown glass pieces melting down nearly 15 feet from shades of orange and gold into blues and aquas. The fellows gather around it in a circle, fresh of their long journey to Israel. The first thing I ask them all is, “why”? That’s all it takes. Why did you wake up and come here?

I tell them the story of Rabbi Akiva. As it goes, “R’ Akiva was sitting by a waterfall contemplating his future and what he would do. He was at a crossroads in his life and was looking for a path forward. On the rock he was sitting on he noticed a hole. He studied the crevice in the rock and  saw that a constant stream of drops trickling off form the main rush was striking the hole in the same place. He understood that the hole in the rock was caused by the constant pressure of the water droplets over a long period of time. The Tamlud records what he said, “ If water which is soft can penetrate a rock which is hard, how much can Torah which is fire, penetrate a person’ heart which is soft?

My wife was in labor for a week.   It felt like one very long night.  Orah endured so many sleepless nights doubled over. I have never seen anyone stay so strong for that long.  She knew that every painful contraction, every tear she cried through the pain was a droplet of water that caused our son to be brought into the world.

Our boy came into this world roaring like a lion. On Taanit Esther we celebrated his brit milah. We brought him into the covenant of the people and Nation of Israel. We decided a few weeks before to have the brit in the Netiv Haavot neighborhood of Eleazar, the community in which my in-laws live and where my wife grew up. 16 beautiful homes in this neighborhood are slated for destruction on orders of the Supreme Court of Israel. Why? Because they might be encroaching on several meters of unclaimed Arab land. Yes, that no one uses. Even after asking to build around several meters and reconstructing elsewhere, the Supreme Court denied the petition. The homes are to be destroyed. So, we decided that this is where our son would enter Am Yisrael.

On Tannit Esther, the day in which Esther went to plead with the King of Persia to strike down Haman’s decree to commit genocide against the Jews, our friends and family gathered around in the synagogue. After the mitzvah was performed, my teacher and friend, Rav Shlomo Katz sang out the name of our son: Mikhael Lavi.

I found out later in the day that during the time of the Brit, the Supreme Court of Israel decided to postpone the destruction of Netiv Haavot for 3 months, enough time to keep fighting it.

I don’t believe in coincidences. My son is special. My son is a lion. On Erev Purim, Mikhael heard his great grandfather, Rabbi Moshe Snow read Megillat Esther. Mikhael was awake for it. He heard every word of it even if he doesn’t understand it… yet. He’ll here it again, twice a year, a drop at a time. Until he understands the message inside and out, we will keep the drops of fire dripping, one at a time, we will keep the fire stoked and we will keep reminding our son where and when he was brought into the covenant.

Mikhael Lavi will grow. Slowly. Right now, he’s our beautiful little boy with one big lionhearted roar. One day, I know he’ll transform into a Lion of Yehuda, a defender of the Jewish People.

About the Author
Eitan Rosenfeld is the Israel Director for Hasbara Fellowships, an Israel Advocacy Organization focusing on North American University students. Eitan is also the COO of Lift Your Legacy Group. Born and raised in Cleveland, he made Aliyah in 2016 and after a series of adventures, lives in Efrat with his wife and newborn son.
Related Topics
Related Posts
Eitan Rosenfeld
Comments