I had initially made a deliberate decision not to offer an opinion about the Iran situation. After all, what do I know? I am not privy to the intelligence information on how close the Iranians are to creating a nuclear weapon. I have not met with the military leadership to understand what our attack will accomplish, what the risks are to our pilots, and what to expect in Israel after we attack. I was not in the room for discussions with President Obama, Secretary of Defense Panetta, and other United States officials — so I cannot gauge whether we can trust them to lead the way in attacking Iran next spring or not.

However, I can certainly comment on the latest development in this saga — Netanyahu reaching out to Rabbi Ovadiah Yosef to gain his support for attacking in the fall.

Some background information is in order if we are to understand the significance of this step. It is clear to the world that Prime Minister Netanyahu and Defense Minister Barak do not trust President Obama’s commitment to attacking Iran next year and are insisting on an attack this fall. The problem is — Time Magazine’s cover notwithstanding — that the Prime Minister is not an absolute monarch, and he does not have enough backing within his government to move forward with an attack. At the moment, his inner group of eight ministers is deadlocked at four votes to four over whether to attack on our own or not. Netanyahu, Finance Minister Yuval Steinitz, Foreign Minister Avigdor Liberman and Barak are in favor. Minister of Strategic Affairs Moshe Yaalon, Minister Benny Begin, Minister of Intelligence and Atomic Energy Dan Meridor and Minister of Internal Affairs Eli Yishai are against an attack.

Moving onto the broader cabinet, there is a seven-seven tie. Joining the above-mentioned ministers in favor of an attack are Education Minister Gideon Saar, Justice Minister Yaakov Neeman, and Minister of Energy and Water Uzi Landau. They are offset by Public Security Minister Yitzchak Aharonovich, Housing Minister Ariel Attias, and Minister for Regional Development and the development of the Negev and the Galili Silvan Shalom who are against an attack.

The prime minister cannot attack Iran without a majority in these forums, and has been doing everything possible to turn the tide in his favor. (It should be noted that Steinitz, generally a Netanyahu ally, was against an attack — which meant a majority against the prime minister — until Netanyahu convinced him to support it.) Sources indicate that Netanyahu has put forth significant effort to woo Minister Moshe Yaalon, a former IDF chief of staff, to his side, but has not succeeded.

The prime minister is desperate. Intelligent, educated, seasoned, military experts are not willing to go along with his plans. So, what does someone do in Israeli politics when they are in need of support for their plans? Right. He turns to the extremist and out-of-touch rabbi.

It has been confirmed that the prime minister has sent some of his minions to meet with Rabbi Ovadiah Yosef, spiritual leader of the Shas party, to gain his support for an attack. At the moment, the one Shas minister in the “forum of eight,” Eli Yishai, is against the attack, along with one additional Shas minister in the cabinet, Ariel Attias. If Rabbi Yosef chooses to support an attack, the prime minister will have a five- three majority in the inner forum, and a nine-five majority in the broader cabinet. Then our war planes can start gunning their engines. 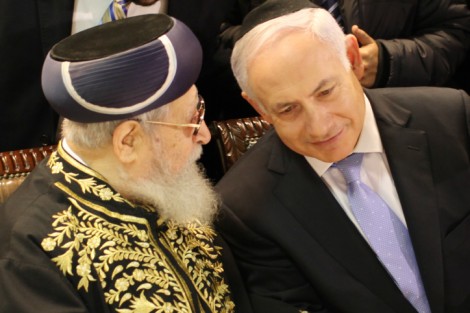 To sum up, as it currently stands, the question of whether or not we attack Iran is in the hands of a great rabbi whose contributions to the  world of Torah over decades has been immeasurable, but who has also made the following public statements in more recent years:

The six million Holocaust victims were reincarnations of the souls of sinners, people who transgressed and did all sorts of things that should not be done. They had been reincarnated in order to atone.

There was a tsunami and there are terrible natural disasters, because there isn’t enough Torah study… Hundreds of thousands [in New Orleans] remained homeless. Tens of thousands have been killed. All of this because they have no God… Bush was behind the [expulsion of] Gush Katif, he encouraged Sharon to expel Gush Katif… We had 15,000 people expelled here [in Israel], and there [in America] 150,000 [were expelled]. It was God’s retribution… God does not short-change anyone.

Why are Gentiles needed? They will work, they will plow, they will reap. We will sit like an “effendi” [an Arabic term for well-respected person] and eat. That is why Gentiles were created.

And, just this past week:

There is no doubt all the judges in the secular court system are ineligible as witnesses, you can’t take them to a wedding to sign on a marriage certificate, it is forbidden…someone who does so…it is as if there is no wedding.

These are just a few of the many glaring examples that demonstrate the fact that Rabbi Yosef. a huge Torah scholar and revered sage, has begun to lean towards extremist tendencies in recent years.  There is no doubt that this is largely because of the “askanim,” handlers with self interests, who surround him and guide him.  But now Rabbi Yosef, with those outright extremist handlers around him, holds the keys to providing the prime minister with a stamp of approval to attack Iran and possibly start a massive regional war?

I should mention that this effort may be relatively easy for Netanyahu. If history is any indicator, the PM will only have to offer Rabbi Yosef and his Shas party plum positions in his next government and funding for Shas institutions throughout the country, and the Shas handlers will convince Rabbi Yosef to side with whatever Netanyahu desires.

I am not here to say that I am against attacking Iran. If it is the right thing to do from a military, intelligence, and not-being-able-to-trust-America perspective, then it is the right thing to do. But I am appalled and outraged that the prime minister is now counting on Rabbi Yosef to empower him to take this step. I am also enraged that we have given a prime minister who is willing to do so the platform to make the most important decisions about our personal and national futures.

Let’s hope and pray that Netanyahu’s efforts fail and that Rabbi Yosef doesn’t change his mind regarding a decision of such epic proportions. Furthermore, when the next elections roll around, let’s not forget that this prime minister was willing to ignore military advisors and enlist a rabbi controlled by extremist handlers for the swing vote in a decision which could lead us to regional war and international isolation.

Note: This column was adjusted from its original content.

About the Author
Dov Lipman was elected to the 19th Knesset in January 2013. He is the author of seven books about Judaism and Israel, and holds rabbinic ordination from Ner Israel Rabbinical College and a masters in education from Johns Hopkins University. He has been at the forefront of combating religious extremism in Israel and is a leader in efforts to create Jewish unity both in Israel and around the world. Former MK Lipman is invited to speak on behalf of the Jewish state both in Israel and around the world and serves as a political commentator for i24 News and ILTV. He currently serves as Senior Manager - Community Outreach for HonestReporting.
Comments