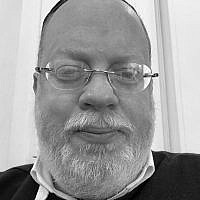 The Blogs
Alan Joseph Bauer
Apply for a Blog
Please note that the posts on The Blogs are contributed by third parties. The opinions, facts and any media content in them are presented solely by the authors, and neither The Times of Israel nor its partners assume any responsibility for them. Please contact us in case of abuse. In case of abuse,
Report this post.

After President Trump announced with Prime Minister Netanyahu his much-hyped “Deal of the Century” to finally solve the Arab-Israeli conflict, just as night follows day, the Palestinian leadership rejected the deal hook, line and sinker.  They could not care less that the deal would involve massive investment in the Palestinian economy and give those living in the Palestinian areas as well as those living in other Arab countries a brighter future. The answer was, as it always has been, no.  Just ask Ehud Barak and Ehud Olmert.

One can see why the answer was in the negative by looking at a photograph that emerged shortly after the White House announcement.  President Abbas, enjoying the eleventh year of his four-year term, held a map—in English—showing a series of pictures, with an ever-diminishing percentage of land set aside for “Palestine”.

The curious aspect of this map is the first figure to the far left, where it shows all of the state of Israel and a bit more around it as 100% “Palestine”.  When was all of that land ever “Palestine”?  That land and all around it were held by the Ottomans until World War I, when the British defeated the Turks and took it over and divided the Levant with the French. The British left in 1948 and the War of Independence resulted in a fledgling state of Israel and the West Bank under Jordanian rule and Gaza under Egyptian rule.  There never was a Palestinian state, and the Palestinians never governed themselves.  But living in Fantasy Land is only part of their problem.

The Palestinian leaders live by and for terror.  They glorify it with street names and support it with massive payments to its practitioners. Those in charge do not know how to make the critical transition from violence to peace that has accompanied many nascent states and great leaders.  George Washington was a revolutionary general who fought the British and went on to be the first US president and one of its greatest statesmen.  Eisenhower led the brutal fight in Europe and later became a very successful president as well. The Palestinians are stuck in war mode and they don’t want to move out of it, as it would demand that they recognize an Israeli state and actually build a functioning society.  From the ersatz maps in Abbas’ hands, one realizes that they can’t live in peace with Israel existing in land they claim fully as their own.  And not surprisingly, these leaders oftentimes align themselves with the very terrorists fighting to regain 100% of a Palestinian State that never existed.

On March 21, 2002, my son and I were wounded in a suicide bombing in downtown Jerusalem.  Around six months after the bombing, there was a report in the local press as to the perpetrators of the attack.  Through my new connection with the relatives of a young couple murdered a few feet from where we had been standing, I received the indictments of the two leading figures in the terror cell that planned and carried out the bombing as well as for the two women who brought the bomber downtown.

Three of the people named in the indictments are major Palestinian political figures today.  None is more famous than Marwan Barghouti.  According to the indictments, he was apprised by a Fatah terrorist of the attack the day before it took place.  When the latter said that they had everything they needed for the bombing, Barghouti gave him $600 anyway for their “success”. Barghouti is the heir-apparent for Abbas.  He has never shown any remorse for all of the attacks in which he has been implicated, because he knows that his only value to Palestinian society is to be a terrorist.  If he were to repent and speak of the need for peace and love, the Palestinians would probably just leave him in jail.

The second figure mentioned in the indictments is Hassan al-Sheikh, then the head of Fatah for the West Bank and today one of Abbas’ most visible ministers.  In the indictment, al-Sheikh is accused of giving money and hand grenades to the head of the terror cell and also of writing the letter of responsibility sent to the press after the detonation. This man is in the Israeli newspapers every week and was one of the first Palestinian officials to criticize the Trump peace plan.

The third major personage in the indictment was Tawfiq Tirawi, formerly the head of the Palestinian intelligence services.  The head of the cell was one of his officers and the bombing material was purportedly taken from Tirawi’s office. Today, Tirawi is a member of the powerful Fatah Central Committee and publicly has stated that the Palestinian authorities should not help Israel prevent terror attacks.

So the Palestinians live in another world where they ran a lot of real estate until the Israelis took it away from them.  Their leadership is filled with individuals who have been involved in terror and have not shown any signs of having changed their ways.  If Israel were to arrest everyone in Ramallah who had played some role in the thousands of terror attacks that occurred during and since the second intifada, would there even be anyone left to turn off the lights in the Muqata?

President Trump’s announcement of his deal was generally received positively in Israel, with even some of the most right-wing members of Netanyahu’s cabinet praising the plan and suggesting accepting it immediately.  The Palestinian “leaders”, as if on cue, rejected the plan and immediately ran to the Arab League and the UN to get help preventing peace from breaking out.  Arafat prepared his acolytes for war, and it’s the only song they have in their national jukebox.  They don’t know how to make peace because they believe they deserve 100% of something they never had.  Without a true change in attitude and an honest renunciation of terror, the Palestinians will never make peace, even if it would be in their best national interest.

About the Author
I was born and raised near Chicago. After graduating from Harvard and Wisconsin, I came to Israel in 1992 and have lived in Jerusalem since. I am an inventor on several patents.
Related Topics
Related Posts
Comments