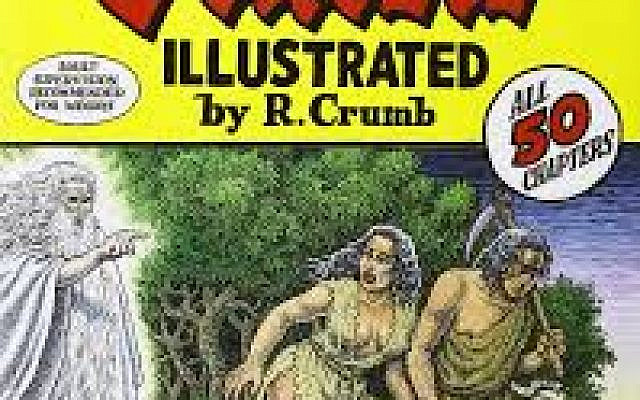 Writing about this monumental parasha (chapter) is like wrestling with a bear.  The chapter is so overwhelming and important that my best hope is to reach a safe place at the end having covered most of the ground between my encounter with “the bear” and my escape.
In book form, this is the first chapter of the Torah, the “beginning”. And of course it is…..and it isn’t! The Torah is a scroll not a book. The words and text of the Torah may not change but we do! So everytime we read the text, year to year, we are reading it anew. The Torah is an infinite loop! 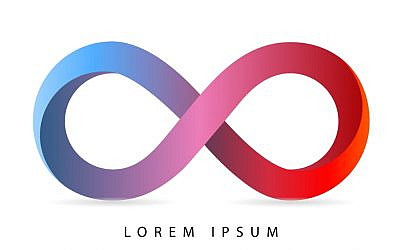 Let’s wrestle, part 1:
1. “When God began to create heaven and earth, the earth being unformed and void, with darkness over the surface of the deep and a wind from God sweeping over the water; God said, “Let there be light”; and there was light. God saw that the light was good, and God separated the light from the darkness.” (GEN 1:1-4)

We start with the fundamentals : Gd is not nature and nature is not Gd. This is critical to the foundation of Judaism. We are actors in nature not subject to, and of, nature.  The creation of heaven and earth is foreshadowed by Moses as he dies – again a sign that endings and beginnings are a linear concept, a simplification, and not the reality of the Torah*. “Give ear, O heavens, let me speak; Let the earth hear the words I utter!” (DEUT 32:1)

Separation, distinction, discretion are key to human spiritual and rational life and to our apprehension and comprehension of the world.  Gd separates light from darkness, morning from evening, day from night.

Creation is deemed by Gd to be good.  Not great, not perfect**, not beautiful….simply and profoundly good. The Torah’s understanding of good is complex but it includes the idea of balance among competing energies.  Think of the eastern idea of yin and yang : interlocking forces that create a balanced whole.

3. God said, “Let there be an expanse in the midst of the water, that it may separate water from water.”  God made the expanse, and it separated the water which was below the expanse from the water which was above the expanse. And it was so.God called the expanse Sky. And there was evening and there was morning, a second day.God said, “Let the water below the sky be gathered into one area, that the dry land may appear.” And it was so.God called the dry land Earth, and the gathering of waters He called Seas. And God saw that this was good. (GEN 1:6-10)

The sky and the earth are created from water!  Wow!

An absolutely charming Rabbinic commentary imagines a conversation between the moon and Gd during which the moon asks “Can two kings wear one crown and be equal in the sky?”. Gd understands that the moon’s question is just and tells the moon that she will be the smaller light but rule the night and that, in compensation, she will be accompanied by the stars and that the Jewish people will base their calendar on her rising and setting***. 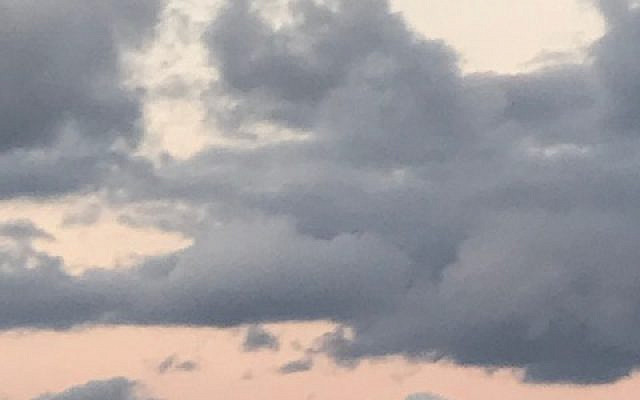 The moon departing and the sun rising at the beach in Tel Aviv.

5. And God said, “Let us make man in our image, after our likeness. They shall rule the fish of the sea, the birds of the sky, the cattle, the whole earth, and all the creeping things that creep on earth.” And God created man in His image, in the image of God He created him; male and female He created them. (GEN 1:26,27)

In Judaism, Gd has no face, no image, no likeness. And the reason is simple and profound : every human being bears the likeness of Gd. So Gd is present every day in everyone once we are able to find it in ourselves and see it in others.

Let’s wrestle, part 2:
The story of creation is split into two parts in this chapter. In short, as Rabbi Gunther Plaut, explains : part 1 is the ideal and part 2 is the actual. I’ll go with that for now.

6. “The LORD God formed man from the dust of the earth. He blew into his nostrils the breath of life, and man became a living being.” (GEN 2:7).

7. “And from the ground the LORD God caused to grow every tree that was pleasing to the sight and good for food, with the tree of life in the middle of the garden, and the tree of knowledge of good and bad”. (GEN 2:9).

These two trees are the source of almost comic confusion among all actors in this chapter including Gd! Which tree is where?  More in the next note….

8. “And the LORD God commanded the man, saying, “Of every tree of the garden you are free to eat;  but as for the tree of knowledge of good and bad, you must not eat of it; for as soon as you eat of it, you shall die.” (GEN 2: 16,17)  And the LORD God said, “Now that the man has become like one of us, knowing good and bad, what if he should stretch out his hand and take also from the tree of life and eat, and live forever!” (GEN 3:22).

There are two trees: 1) the tree of the knowledge of good and bad and 2) the tree of life.  The first tree is the tree of morality.  The second tree is the tree of mortality (and wisdom).  From the fruit of the first tree we learn to distinguish right from wrong, good from bad, moral from immoral. From the second tree, we learn that our bodies are dust but our souls and spirit are immortel –  we learn we are mortel and we learn to be human beings. It is for this reason that the Torah is called, justly, the Tree of Life, עץ חיים!**** And when we study the Torah, we too eat from the Tree of Life.

I am abbreviating the story of Adam and Eve. But the key point here is that both Adam and Eve experienced shame, a purely human emotion, after eating from the tree of good and bad.  Rabbi Jonathan Sacks gives a brilliant talk on the difference between shame and guilt in his talk with Abe Socher of the Jewish Review of Books. And he also discusses Eve’s encounter with the serpent, or snake, and the flight from the garden of Eden.
Listen here (from around 17.58 min – 23.00):
http://jewishreviewofbooks.com/conversation-with-rabbi-jonathan-sacks/

10. “When the woman saw that the tree was good for eating and a delight to the eyes, and that the tree was desirable as a source of wisdom, she took of its fruit and ate. She also gave some to her husband, and he ate. Then the eyes of both of them were opened and they perceived that they were naked; and they sewed together fig leaves and made themselves loincloths. They heard the sound of the LORD God moving about in the garden at the breezy time of day; and the man and his wife hid from the LORD God among the trees of the garden. The LORD God called out to the man and said to him, “Where are you?”” (GEN 3:6-9)

“Where are you?”.  This is a powerful and critical question.  When life is upside down, when things go awry, in times of war, disease and strife we often look to the heavens and ask Gd “where are you?” But here Gd returns the question to man : “Where are you?….what are you doing?….why are you behaving this way?
“Rabbi Abraham Joshua Heschel wrote God in Search of Man: A Philosophy of Judaism to explore this very question and explain why it is so important in our lives.
http://en.wikipedia.org/wiki/God_in_Search_of_Man

11. “And the LORD said to Cain, “Why are you distressed, And why is your face fallen? Surely, if you do right, There is uplift. But if you do not do right Sin crouches at the door; Its urge is toward you, Yet you can be its master.” (GEN 4: 6,7)
Cain and Abel, two sons, are born to Adam and Eve and, immediately, there is sibling rivalry and Cain kills Abel. The story has given rise to countless interpretations. Jealousy? Envy? Incest? What I love about this passage is Gd’s counsel to Cain “Sin crouches at your door; it’s urge is toward you but you can be its master”.  These are words we should all internalize everytime we are faced with a choice between doing what is right, remaining silent or, worse, doing what is wrong.

12. “The LORD said to Cain, “Where is your brother Abel?” And he said, “I do not know. Am I my brother’s keeper?” (GEN 4:9).
This is one of the most famous statements in the Torah. And, sometimes, it is interpreted to mean that we are not responsible for our “brothers”.  But Judaism and the Torah are absolute : the answer to Cain’s question is, “yes, you are your brother’s keeper!”.  We are responsible for each other without question in every circumstance.

Notes (please read):
*Thank you Rabbi Ariel Pollak
** Voltaire (Francois-Marie Arouet) is widely credited with the marvelous understanding that “the perfect is the enemy of the good”.
***Thank you Nahum M. Sarna
****The great psychologist Ernest Becker explained in modern language how we, human beings, aware of our mortality need community.  His treatise, “The Denial of Death” explains in many ways why human “religious” traditions are vital. https://en.wikipedia.org/wiki/The_Denial_of_Death

1. Mark Twain imagined the encounter between Adam and Eve in these charming diaries with marvelous illustrations by Lester Ralph.  Thank you Nancy Sinkoff. https://www.gutenberg.org/files/8525/8525-h/8525-h.htm

2. John Steinbeck‘s masterpiece, East of Eden (and the film made from the book) retell the story of Cain and Abel.
https://en.wikipedia.org/wiki/East_of_Eden_(novel)

3. This chapter introduces Gd with two names, “Elohim” אלהים and “Adonai” יהוה. Jewish tradition understands these as aspects of holiness : the first, justice and the second, mercy.  William Shakespeare wrote about these qualities and their authority (mercy tempering justice) in the Merchant of Venice, Act 4, Scene 1. Thank you Rabbi Gunther Plaut and Yael Feiler.

“The quality of mercy is not strained.
It droppeth as the gentle rain from heaven
Upon the place beneath. It is twice blest:
It blesseth him that gives and him that takes.
‘Tis mightiest in the mightiest; it becomes
The thronèd monarch better than his crown.<a His scepter shows the force of temporal power,
The attribute to awe and majesty
Wherein doth sit the dread and fear of kings;
But mercy is above this sceptered sway.
It is enthronèd in the hearts of kings;
It is an attribute to God Himself;
And earthly power doth then show likest God’s
When mercy seasons justice.”

Author’s note: All images have been purchased and cleared of copyright restriction or are the property of the author.

About the Author
Martin Sinkoff is a (still new) Oleh Hadash in Israel (not yet two years). He lives in Tel Aviv. "I have had a long and successful career in the wine trade in the United States and France. I have lived in many places in the United States, including twenty years in Dallas, Texas (which I loved). I moved to Israel from Manhattan (where I was born). I am a past president of Ansche Chesed in New York and an active member of Kehilat Sinai in Tel Aviv. And I am an avid reader of Torah. You can read more about me on my website www.sinkoff.com." The background photograph is a view of vineyards in the Judean Hills wine growing district of Israel, one of Israel's best appellations.
Comments