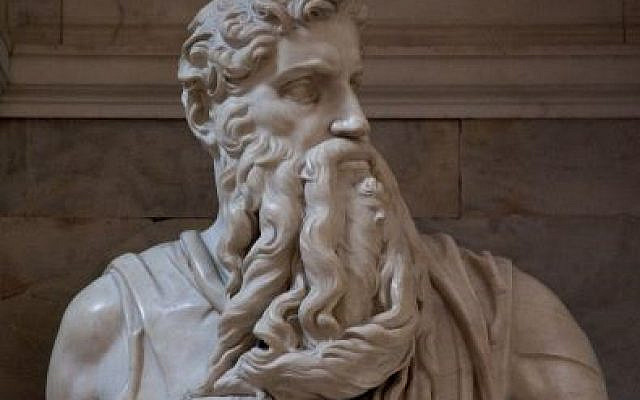 Moses by Michelangelo Buonarroti commissioned by Pope Julius II in 1505 for the Church of San Pietro. Image purchased on alamy.com

In this chapter, we will witness the first seven of the ten plagues that befall Egypt. It’s rather surreal, not quite believable. Gd, himself or herself (pronouns following are gender neutral), emerges as both forgetful and, strangely, not equal to the task of liberating the Isarelites.

Here are my highlights and notes:

1.Gd tells Moses:  I appeared to Abraham, Isaac, and Jacob as El Shaddai, but I did not make Myself known to them by My name יהוה. I also established My covenant with them, to give them the land of Canaan, the land in which they lived as sojourners. I have now heard the moaning of the Israelites because the Egyptians are holding them in bondage, and I have remembered My covenant. (EX 3:3-5)

I find Gd’s justification of himself a bit jarring (and annoying). Doesn’t Moses already know who Gd is?  And has Gd been asleep these many (hundreds) of years?  All of a sudden, he “remembers” the very covenant he created?

However, there is an important takeaway here: to be forgotten in life is overwhelmingly painful.  When we are forgotten, in small and large ways, we lose hope. When we are not invited to join friends for an evening out, when we are depressed and no one checks in with us, when we feel alone at any time: in all of these situations (and many others), we are “forgotten”. Judaism treasures the power of remembering and the need to remember (in all meanings of that word) because it knows the human cost of forgetting and being forgotten.

2. Gd speaks to Moses and tells him: Say, therefore, to the Israelite people: I am the LORD. I will free you from the labors of the Egyptians and deliver you from their bondage. I will redeem you with an outstretched arm and through extraordinary chastisements.And I will take you to be My people, and I will be your God. And you shall know that I, the LORD, am your God who freed you from the labors of the Egyptians. I will bring you into the land which I swore to give to Abraham, Isaac, and Jacob, and I will give it to you for a possession, I the LORD.” But when Moses told this to the Israelites, they would not listen to Moses, their spirits crushed by cruel bondage. (EX 6:6-9)

If I were Moses, I would turn to Gd and ask, “why don’t you tell them yourself? Why do you need me?” But, anyway, that’s not the story as it is written.  The important takeaway here is that when they were told that liberation was imminent, the Israelites “would not listen”.  This is now known as the Stockholm Syndrome : when captives identify with their captors and refuse to be released (can not “listen”).  Read more here and here.

3. Amram took to wife his father’s sister Jochebed, and she bore him Aaron and Moses; and the span of Amram’s life was 137 years.   It is the same Aaron and Moses to whom the LORD said, “Bring forth the Israelites from the land of Egypt, troop by troop.”  It was they who spoke to Pharaoh king of Egypt to free the Israelites from the Egyptians; these are the same Moses and Aaron. (see EX 6:14-26)

Why, again here, does the Torah insist on reminding us of something we already know?  And, why the insistence of telling us that Moses and Aaron are “the same Aaron and Moses”?  Were there others?  This again raises the question asked by Sigmund Freud (see last week’s commentary): who, in fact, was Moses?  Was he Egyptian or Israelite? And where, in fact, did he come from?  And, finally, how did Aaron escape being killed following Pharaoh’s edict to kill all male Israelite boys?  Are Aaron and Moses really brothers?

4. Moses appealed to the LORD, saying, “See, I am of impeded speech; how then should Pharaoh heed me!” The LORD replied to Moses, “See, I place you in the role of God to Pharaoh, with your brother Aaron as your prophet. You shall repeat all that I command you, and your brother Aaron shall speak to Pharaoh to let the Israelites depart from his land. (EX 7:1-2)

This is wild: Gd tells Moses that he, Moses, will stand and speak in the place of Gd himself! Once again, this gives credence to Freud’s theory that Moses placed himself in the role of Gd before the Israelites.  In effect, Moses became a new Gd substitute (to good ends for sure but still….). 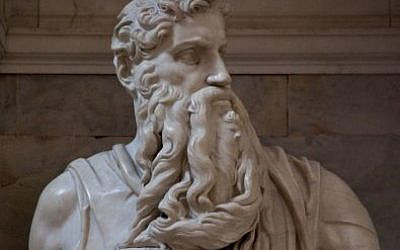 Moses by Michelangelo Buonarroti commissioned by Pope Julius II in 1505 for the Church of San Pietro. Image purchased on alamy.com

5. Pharaoh’s “hard heart”.  Gd tells Moses that he, Gd, will “stiffen” Pharaoh’s heart.  This is, again, very strange. Why would Gd, working on the liberation of the Israelites, prevent it at the same time?  Gd (acting through Moses and Aaron) enters into a contest with Pharaoh’s staff (aka magicians). It’s a rather bizarre back-and-forth. Read the full story in Exodus chapters 7-9. In the end of the chapter, Pharaoh still does not relent.  So Pharaoh’s heart stiffened and he would not let the Israelites go, just as the LORD had foretold through Moses. (EX 9:35)

And so we come to the central situation in this chapter : who is the boss?  Moses?, Gd? or Pharoah?  At the end of the chapter Pharaoh seems to have won the round, defying Gd at all odds. But if we look more closely at the text it is clear who Pharoah is: he is a dishonest, venal, self-absorbed, power-hungry, angry, sadistic leader. We have known others like him including recently.  He will lose ultimately but many Egyptians will continue to support him until the end.

The story continues next week!