This compelling chapter is the first part of two chapters that tell the story of Jacob’s growing up and his transformation (in most part) from a deceiving, slightly cowardly, “slippery”* young man to the father of a nation. It’s an extraordinary story and Jacob pays a high price for his education. In the end (not in this chapter) he dies depleted and completed at the same time.  In this chapter he starts to grow up.

1.  Jacob left Beer-sheba, and set out for Haran. He came upon a certain place and stopped there for the night, for the sun had set. Taking one of the stones of  that place, he put it under his head and lay down in that place.  He had a dream; a stairway was set on the ground and its top reached to the sky, and angels of God were going up and down on it. And the LORD was standing beside him and He said, “I am the LORD, the God of your father Abraham and the God of Isaac: the ground on which you are lying I will assign to you and to your offspring.׃ Your descendants shall be as the dust of the earth; you shall spread out to the west and to the east, to the north and to the south. All the families of the earth shall bless themselves by you and your descendants. Remember, I am with you: I will protect you wherever you go and will bring you back to this land. I will not leave you until I have done what I have promised you.” Jacob awoke from his sleep and said, “Surely the LORD is present in this place, and I did not know it!” (GEN 28: 10-16)

Jacob, like almost all of the patriarchs, is a dreamer (as will be his son, Joseph). In our dreams we find counsel and insight, intuition; “la nuit porte conseil” teaches the French proverb: “night is the mother of wisdom”.  In this dream, Jacob, a young man on his first trip away from home and his protective mother, Rebecca, hears a reassuring and encouraging voice. And Gd, “the voice” is a protective and loving voice. Jacob starts to grow up with his admission “Gd was present (i.e. I learned something new) and I did not know it (at the time)”.  When we understand what we do not know we start to learn and we start to grow. 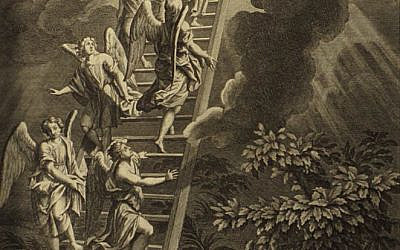 Jacob’s Ladder by Gerard Hoet, 1728. In the public domain.

Laban is Jacob’s uncle, Rebecca’s brother. He is not a nice man. He has two daughters, Leah, the elder, and Rachel, the younger.  Jacob falls immediately in love with Rachel.

Now Laban had two daughters; the name of the older one was Leah, and the name of the younger was Rachel.  Leah had weak eyes; Rachel was shapely and beautiful. (GEN 29:16-17)

The Torah is very discreet in the description of Leah, “she had weak eyes”, and the rabbis are similarly discreet. In sadness and truth, the meaning is clear : Leah, the elder, was not as beautiful as her younger sister, and she always suffered from the comparison.

3. Jacob loved Rachel; so he answered, “I will serve you seven years for your younger daughter Rachel.” Laban said, “Better that I give her to you than that I should give her to an outsider. Stay with me.” So Jacob served seven years for Rachel and they seemed to him but a few days because of his love for her. Then Jacob said to Laban, “Give me my wife, for my time is fulfilled, that I may cohabit with her.” And Laban gathered all the people of the place and made a feast. When evening came, he took his daughter Leah and brought her to him; and he cohabited with her.  When morning came, there was Leah! So he said to Laban, “What is this you have done to me? I was in your service for Rachel! Why did you deceive me?” (GEN 29:18-26)

As Jacob deceived his father in his blindness, Jacob is himself deceived by his uncle in the dark.** And, as Nahum Sarna points out, “rather than moralize, the Torah lets Jacob discover that people who give themselves permission to lie and cheat find themselves in a world where no one can be trusted”. (Etz Hayim, page 172).

4. And Jacob cohabited with Rachel also; indeed, he loved Rachel more than Leah. And he served him another seven years. The LORD saw that Leah was unloved and he opened her womb; but Rachel was barren. Leah conceived and bore a son, and named him Reuben; for she declared, “It means: ‘The LORD has seen my affliction’; it also means: ‘Now my husband will love me.’” (GEN 29:30-32)

The story of Jacob’s children, twelve boys by four different women and one girl, is a story of the ongoing, bitter, competition between Leah and Rachel. They dislike (is “hate too strong a word?) each other (as same sex siblings close in age often do) and fight to see who can bear the most children with Jacob, using themselves and their maids in the competition. The entire family (except for Dinah!) is detailed in the next chapter:

The sons of Leah: Reuben—Jacob’s first-born—Simeon, Levi, Judah, Issachar, and Zebulun. The sons of Rachel: Joseph and Benjamin. The sons of Bilhah, Rachel’s maid: Dan and Naphtali. And the sons of Zilpah, Leah’s maid: Gad and Asher. These are the sons of Jacob who were born to him in Paddan-aram. (GEN 35: 23-28)

The great Spanish painter, Francisco de Zurbaran (1598-1664) painted the entire family (except Dinah!) between 1641 and 1658. The paintings are larger than life, literally (as are the personalities), and Zurburan was inspired by Jacob’s final blessings to each of his sons in revealing their characters.  Read more here:
https://www.frick.org/exhibitions/zurbaran
https://en.wikipedia.org/wiki/Francisco_de_Zurbar%C3%A1n
https://en.wikipedia.org/wiki/Jacob_and_his_twelve_sons

5. When Leah conceived again and bore Jacob a sixth son, Leah said, “God has given me a choice gift; this time my husband will exalt me, for I have borne him  six sons.” So she named him Zebulun. Last, she bore him a daughter, and named her Dinah. Now God remembered Rachel; God heeded her and opened her womb. She conceived and bore a son, and said, “God has taken away my disgrace.” (GEN 30:19-23)

The passage above tells more about the ongoing rivalry between Leah and Rachel and, more important, in one line tells us about the birth of Dinah, Jacob’s only daughter. Dinah’s story is critical to our understanding of Jacob and his personality (and of his sons and their personalities too).  More next week……

6. He (Laban, Jacob’s uncle) said, “What shall I pay you?” And Jacob said, “Pay me nothing! If you will do this thing for me, I will again pasture and keep your flocks: let me pass through your whole flock today, removing from there every speckled and spotted animal—every dark-colored sheep and every spotted and speckled goat. Such shall be my wages. In the future when you go over my wages, let my honesty toward you testify for me: if there are among my goats any that are not speckled or spotted or any sheep that are not dark-colored, they got there by theft.” And Laban said, “Very well, let it be as you say.” But that same day he removed the streaked and spotted he-goats and all the speckled and spotted she-goats—every one that had white on it—and all the dark-colored sheep, and left them in the charge of his sons.  And he put a distance of three days’ journey between himself and Jacob, while Jacob was pasturing the rest of Laban’s flock. Jacob then got fresh shoots of poplar, and of almond and plane, and peeled white stripes in them, laying bare the white of the shoots. The rods that he had peeled he set up in front of the goats in the troughs, the water receptacles, that the goats came to drink from. Their mating occurred when they came to drink, and since the goats mated by the rods, the goats brought forth streaked, speckled, and spotted young. But Jacob dealt separately with the sheep; he made these animals face the streaked or wholly dark-colored animals in Laban’s flock. And so he produced special flocks for himself, which he did not put with Laban’s flocks. Moreover, when the sturdier animals were mating, Jacob would place the rods in the troughs, in full view of the animals, so that they mated by the rods; but with the feebler animals he would not place them there. Thus the feeble ones went to Laban and the sturdy to Jacob. (GEN 30:31-42)

In his final act of deception, Jacob manages to impoverish his uncle to his own benefit.  It’s a fitting end for Laban who was so unkind and deceitful to his nephew.  But it confirms Jacob’s “slippery” nature, his intelligence and his ability to outwit others.

7. The chapter ends with one final act of deception and this one is not Jacob’s but Rachel’s. She steals her own father’s idols, hides them in such a way that he cannot find them and lies to both her father and husband. The entire passage is here (GEN 31:17-37)
https://www.sefaria.org/Genesis.31.17-37?lang=bi&aliyot=0

The chapter begins as the sun sets and ends as the sun rises.*** Jacob spent twenty years in the service of his jealous, mean and dishonest uncle.  The rabbis comment that this was part of the payback to Jacob for deceiving his brother, Esau, and necessary for him to begin his own transformation into the patriarch he will become. We shall see as we follow his story next week.

Author’s note : the image of the painting of Jacob by Francisco de Zurbaran and the image of Jacob’s Ladder by Gerard Hoet are in the public domain.