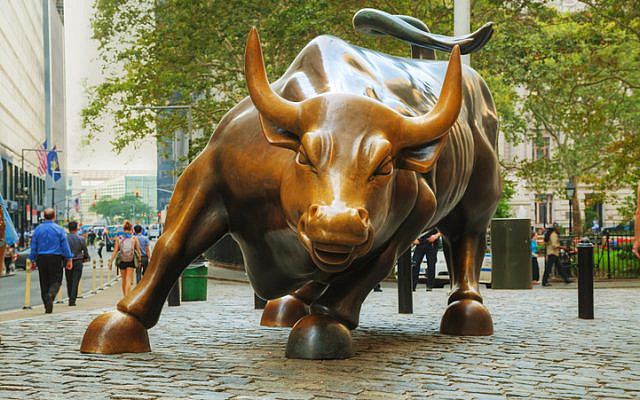 This chapter continues the “how-to” manual with a major interruption: the Israelites’s rebellion, the building of the golden calf and the ensuing civil war among the people.  This central incident marks the chapter and is easy to summarize: everyone is angry!  The Israelites are angry that Moses is taking so long to come down from the mountain (see below); Moses is angry that the Israelites lost faith in him (and God) and built a substitute god in the form of a golden calf: As soon as Moses came near the camp and saw the calf and the dancing, he became enraged; and he hurled the tablets from his hands and shattered them at the foot of the mountain (EX 32:19); Moses is angry at Aaron for letting the Israelites have their way, Moses said to Aaron, “What did this people do to you that you have brought such great sin upon them?” Aaron said, “Let not my lord be enraged. (EX 32: 21-22). God feels rebuffed and is angry at the entire world. “The LORD further said to Moses, “I see that this is a stiffnecked people. Now, let Me be, that My anger may blaze forth against them and that I may destroy them, and make of you a great nation.” (EX 32:9)


Imagine a family at a holiday dinner erupting in argument, yelling and screaming and starting to throw food and plates at each other.  Only Aaron, among the major actors, is not angry.  The rabbis credit Aaron for his temperance but, when we read closely, we see that Aaron is in fact a weak man unable to say “no” when that is what needs to be said.

Here are my takeaways out of the order in which they appear in the chapter:

1. Space and Time. And the LORD said to Moses: Speak to the Israelite people and say: Nevertheless, you must keep My sabbaths, for this is a sign between Me and you throughout the ages, that you may know that I the LORD have consecrated you. You shall keep the sabbath, for it is holy for you. He who profanes it shall be put to death: whoever does work on it, that person shall be cut off from among his kin. (EX 31:12-14)

This commandment may seem repetitive. It is! When the Torah repeats an idea it is as if writing that idea in bold uppercase text.  Like this: KEEP MY SABBATHS!  Rabbi Nahum Sarna explains perfectly: “in Judaism sacred time (time itself) takes precedence over sacred space. Space is fixed, visible and tangible; time is fluid, invisible and formless but it defines how we communicate. “If there is a conflict between the holiness of space and the holiness of time, the holiness of time takes precedence”.  A particular space may be inaccessible to some but shared time is accessible to all. (Rabbi Nahum Sarna, p.528, Etz Hayim).

The Sufi poet and scholar, Nūr ad-Dīn ‘Abd ar-Rahmān Jāmī, known as Jami wrote this beautiful appreciation of space and time: “To display His eternal attributes, in their inexhaustible variety, the Lord made green fields of time and space“.

2. God and Moses: a deeply intimate relationship. The description of the relationship between Moses and God at the end of the chapter is replete with sexual imagery. Moses implores God to know (him/her).  God refuses but tells Moses “You cannot see My face, for man may not see Me and live.” And the LORD said, “See, there is a place near Me. Station yourself on the rock and, as My Presence passes by, I will put you in a cleft of the rock and shield you with My hand until I have passed by.Then I will take My hand away and you will see My back; but My face must not be seen.” (EX 33: 20-22).

After their encounter Moses emerges “radiant”: So Moses came down from Mount Sinai. And as Moses came down from the mountain bearing the two tablets of the Pact, Moses was not aware that the skin of his face was radiant, since he had spoken with Him. Aaron and all the Israelites saw that the skin of Moses’ face was radiant; and they shrank from coming near him.  Afterward all the Israelites came near, and he instructed them concerning all that the LORD had imparted to him on Mount Sinai. And when Moses had finished speaking with them, he put a veil over his face. Whenever Moses went in before the LORD to speak with Him, he would leave the veil off until he came out; and when he came out and told the Israelites what he had been commanded, the Israelites would see how radiant the skin of Moses’ face was. Moses would then put the veil back over his face until he went in to speak with Him. (EX 34:31-35)

The language in this passage is very beautiful and, to me, clearly denotes a deeply intimate, somewhat ambiguous relationship. A “cleft” in the  rock, an encounter that leaves Moses “radiant”, Moses covering his face with a veil in public: it’s quite moving and almost a bit embarrassing to read.

3. The Golden Calf.
Subchapter 32 deals in its entirety with the building of the golden calf, the central story in this chapter. It is a must-read (English follows the Hebrew).  Here, from my point of view, is the essential: The building of the sanctuary and the building of the golden calf are described with nearly identical words: For the sanctuary: “there are the gifts you shall accept from the (people) – gold, silver and copper; blue, purple and crimson yarns and tanned (leathers)” (EX 25:3).  And for the golden calf: When the people saw that Moses was so long in coming down from the mountain, the people gathered against Aaron and said to him, “Come, make us a god who shall go before us, for that man Moses, who brought us from the land of Egypt—we do not know what has happened to him.”Aaron said to them, “Take off the gold rings that are on the ears of your wives, your sons, and your daughters, and bring them to me.” And all the people took off the gold rings that were in their ears and brought them to Aaron. This he took from them and cast in a mold, and made it into a molten calf. And they exclaimed, “This is your god, O Israel, who brought you out of the land of Egypt!” (EX 32:1-4)