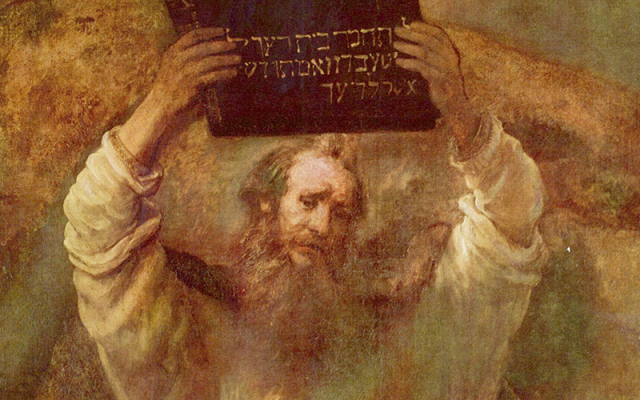 Our parasha begins optimistically enough—Moshe is still alone with God on the mountain, while his assistant Yehoshua waits down below. The Covenant has been signed and witnessed, and the Tablets of Witness carved out, ready to be taken down the mountain in triumph. Only a few details remain of the instruction that he is to bring down to the people—a few more details on building the Mishkan, a few ritual matters.

But meanwhile, things in the camp of the Israelites are not going well. The people, alarmed at Moshe’s long absence, clamor for reassurance. “This man Moshe, who brought us out of Egypt… we don’t know what has become of him.” Give us some visible sign that we are not abandoned, they say. Give us something to unite us again!

And Aaron, left in a position of leadership that he did not ask for, complies. What follows is the infamous episode of the “golden calf”. While there is some debate over the exact nature of this episode, and why it was such a failing, it is clear that it represented a major upset in the contract between the people and God, a contract that was, at that very moment, being concluded up on the mountain.

Moshe is told as much by God—who, in one of the ironic word plays so common in the Torah, begins a “battle of pronouns” with Moshe: “Your people, whom you led up from Egypt, have gone astray…” To which Moshe counters, “Don’t be angry with Your people, whom You brought out of Egypt…”

But while God lets the matter rest for now, Moshe is overcome by the disaster. When he sees the revelry around the cast-gold statue, he flings the Tablets of the Covenant from his hands and institutes a purge of the offenders.

But how could Moshe, who, more than any other figure, stands for Torah… how could he destroy the precious written record of the Covenant, inscribed by God’s own hand?

Mulling over this question, our sages come to a surprising conclusion: Moshe is to be praised for his actions!

Why would Moshe be praised for his anger and chutzpah?  In a marvelous shiur, Rav Yoel bin Nun weaves together the strands of midrash, together with a close reading of the Covenantal text. His conclusion: Moshe’s breaking of the tablets was an act of heroism by which Moshe saved all of Am Yisrael from destruction! This action paved the way for a more realistic Covenant, under better terms—one which the people—and we, their descendants—could live by.

The first set of tablets, explains Rav Yoel, were written in God’s hand. They included the written Torah only, with no provision for the extensive oral tradition and human reinterpretation on which Jewish Law depends. It was a law that represented the strict application of justice (or, if you will, the workings out of karma). There was no “if, ands, or buts”, no recourse, and no excuses.

Rav Yoel finds a broad hint of this in the first lines of the Covenant signed between God and Am Yisrael at Sinai. There, God uses the following formula to formalize the people’s commitment to live by His Law:

Upon coming down from the mountain, Moshe’s first action is to break the tablets of the law—the tablets of witness—that contain this preamble and command. It is an act of desperation which “destroyed the evidence” of the contractual agreement before God could carry out the threat implied in this first commandment. The midrash compares Moshe’s act to the tearing up of a marriage contract:

Now, having restored order among the people, Moshe returns to God to try to iron things out—an unwilling marriage broker. One would think that having “torn up the contract”, that would be the end of things: the Covenant would appear to be in ruins, the relationship with God irreparably destroyed.

A glimpse into the long view

And in fact, God had earlier given Moshe that option: Let Me wipe them out and we’ll start over. I’ll let you be a new Avraham and we’ll make a fresh start. In one of the most selfless acts in the Torah, Moshe refuses: “If You will forgive this people… But if not, erase me from Your book!” God reassures Moshe that only the guilty will suffer, but hints that accounts will be settled at some point. What follows is one of the more enigmatic conversations in the entire Tanakh. Moshe, perhaps thinking he has nothing to lose, asks for a glimpse of the divine mystery:

The exchange which follows goes further into mystical territory than anywhere else in the written Torah, ending with Moshe’s plea:  הַרְאֵנִי נָא אֶת כְּבֹדֶךָ  (“Show me Your glory!”)

The word used is “K’vodcha” from the root K-V-D, “heaviness.” Perhaps the closest contemporary expression would be “gravitas” (but “Show me Your gravitational field,” though perhaps appropriate, doesn’t quite have the poetic ring to it.) In answer, God tells him:

We don’t know what Moshe actually saw, but we are told what he heard:

This description of God’s workings in the universe is called the “Thirteen Divine Middot (Attributes)” and is one of the most quoted phrases in all of scripture. It is the central theme of the Yom Kippur liturgy, and is repeated throughout the day on a note of rising expectancy and triumph. But what does it mean in context?

Rav Yoel points out the startling similarity between this phrase and the opening commandment of the first set of tablets:

While the first set of Tablets included the absolute conditional property of God’s justice, the Thirteen Middot leave out “those who keep My commandments”. But more, they include the gentler attributes (slow to anger, compassionate…) missing from the first set of tablets, and mention Divine justice almost as a parenthetical remark.

And this, according to Rav Yoel, is the unwritten principle behind the Second set of tablets: the Middat HaRachamin as opposed to the previous Middat HaDin. Although Moshe is instructed to write on them exactly what was on the first set, he is given this vision of something beyond the Written Law—a glimpse of the inner workings of justice, and a hint of how the law is to be interpreted and reinterpreted in later ages.

The path made by walking

This is the writing “between the lines” in the crowns and dots on the letters. This is the text that, in another famous midrash[1], the generation of Moshe was unable to read, and which hence could not be passed down in the Written Torah. But a thousand years later, R’ Akiva was able to expound every dot and crown into a “mountain of halakhot”.

And so it is to this day: here we are—still nourished by the white spaces between the letters, still expounding the crowns on the letters to derive “whole mountains of halakhah”.

And this is why our sages link the Oral Law (the Torah sh’baal peh) to a verse at the end of our Parashah: “God said to Moshe, ‘Write out these words, because according to these words, I am making a covenant with you and with Israel.'”

Thus, the human share of the Torah is not “instead of” the divinely-sanctioned tradition; it is part of it! We apply our reasoning to the received tradition because of something built into the structure of creation itself. We can’t ask God to tell us the future, not because we wouldn’t understand, but because the future has not yet been decided. We are part of what makes things happen in one way rather than another.

Nor can we ask God to tell us how to judge among human beings. We must follow our own understanding because the Torah is not in Heaven. The second set of tablets were carved by the human hand, and reflect the human element in Divine law.  Hence, the reaction of God when confronted with the sages’ refusal to accept the judgement of the Heavenly Voice in the case of the Tanur shel Achnai: “My children have defeated me.” It is the victory of the created world itself—the victory of a chaotic creation that is actually capable of surprising and delighting its Creator.