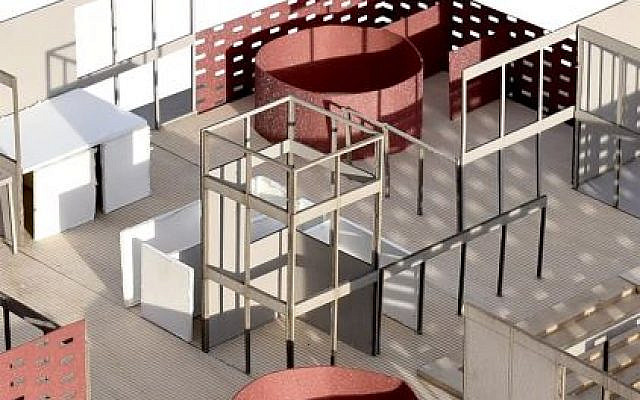 Miriam Dreiblatt, architectural designer. The Restorative Justice Community Center in Middletown, CT. The community center serves Middletown residents in addition to providing space for Restorative Justice practice, an alternative to the traditional judicial system where crime victims and perpetrators participate in mediated conflict resolution. In development with local advocacy organizations, the layered design embeds the circle process and support rooms within the public space to expose community members to Restorative Justice; yet, ensures the participants’ privacy by obscuring the rooms’ entryways and orienting the view toward the outside. The building reinterprets Middletown’s historic fabric through perforated brick screen and an expressive concrete structure. Notes and image courtesy Miriam Dreiblatt.

This chapter, about the rebuilding of the community after the transgressions related to the construction of the golden calf, is short, poetic and beautiful. It is accompanied by parashat Pkudei פקודי which is more of a coda than a chapter itself.

Moses said further to the whole community of Israelites: This is what the LORD has commanded:Take from among you gifts to the LORD; everyone whose heart so moves him shall bring them—gifts for the LORD: gold, silver, and copper; blue, purple, and crimson yarns, fine linen, and goats’ hair; tanned ram skins, dolphin skins, and acacia wood; oil for lighting, spices for the anointing oil and for the aromatic incense; lapis lazuli and other stones for setting, for the ephod and the breastpiece. (EX 35:4-9)

In short: members of the community are asked again to open and soften their hearts and be motivated by love rather than by fear (see last week’s commentary on Ki-Tisa).

And let all among you who are skilled come and make all that the LORD has commanded: the Tabernacle, its tent and its covering, its clasps and its planks, its bars, its posts, and its sockets; the ark and its poles, the cover, and the curtain for the screen; the table, and its poles and all its utensils; and the bread of display; the lampstand for lighting, its furnishings and its lamps, and the oil for lighting; the altar of incense and its poles; the anointing oil and the aromatic incense; and the entrance screen for the entrance of the Tabernacle; the altar of burnt offering, its copper grating, its poles, and all its furnishings; the laver and its stand; the hangings of the enclosure, its posts and its sockets, and the screen for the gate of the court; the pegs for the Tabernacle, the pegs for the enclosure, and their cords;the service vestments for officiating in the sanctuary, the sacral vestments of Aaron the priest and the vestments of his sons for priestly service. (EX 35:10-19)

All artists in the community are called to action.

And Moses said to the Israelites: See, the LORD has singled out by name Bezalel, son of Uri son of Hur, of the tribe of Judah. He has endowed him with a divine spirit of skill, ability, and knowledge in every kind of craft…. and to give directions. (EX 35:30-34).

Bezalel is the chief architect and contractor to the Israelite community then.   In each of our lives and communities today we are blessed with and by artists, designers, architects, painters, photographers, sculptors and ceramicists.

Here are some (part 1) of the artists in my life:
Miriam Dreiblatt, architectural designer.  Miriam’s work is the featured image above. Miriam is a graduate of the Heschel School in Manhattan, McGill University in Montreal and the Yale School of Architecture and is now based in New Haven, Connecticut.  See more of Miriam’s work in the link to her name.

Liz Baron, “Reverchon Park”, May 2020. With permission of the artist.

Liz Baron, artist. “Liz Baron is an artist and restaurateur who lives in Dallas, Texas by way of New York City. Liz and her husband, Jim, founded, own and operate Blue Mesa Grill and TNT Tacos and Tequila, Mexican-Southwestern restaurants. Liz received her Bachelor of Fine Art from Pratt Institute.” (courtesy Global Poemic).

Deborah Garber, artist. “Debbie Garber graduated from the Rhode Island School of Design where she studied printmaking and illustration, Garber sought experience in life and art in Europe, the Middle East and Asia. Her pastels, oils and prints are included in the collections of numerous private individuals, museums and corporations”. (courtesy website for Deborah Garber linked above).

Bill Jacobson, photographer. “Bill Jacobson is widely known for his out of focus photographs of both the figure and the landscape. His work is in the collections of the Guggenheim Museum, the Metropolitan Museum, the Whitney Museum, the Victoria and Albert Museum, and many others. In 2012, he was the recipient of a fellowship from the John Simon Guggenheim Foundation. He began his signature, indistinct images in 1989, and has since been exhibiting in galleries and museums throughout the US and Europe. These early works, titled Interim Portraits, feature shadowy, pale figures that evoke the loss experienced by many during the height of the AIDS epidemic”.  In 2005 Jacobson moved to realistic images asking the same  fundamental existential questions. (courtesy Bill Jacobson Studio website, linked above, and Bill Jacobson).

Joseph Zrihen. “The Silver Skies”. With permission of the artist.

Joseph Zrihen, artist/sculptor. Joseph Zrihen is widely and better known as one of the world’s leading epidemiologists and acupuncturists, actively involved in providing advice and counsel about Covid-19 to his patients and worldwide as a guest on many television news channels in Israel and France. Born in Morocco, raised in France since the age of 10, graduate of the Toulouse Faculty of Medicine and now Israeli, Zrihen describes himself as “one man with two passions: medicine and art”.

Susanne Woyciechowicz. Ceramic plate. With permission of the artist.

Susanne Woyciechowicz is a teacher, artist and ceramicist living in Israel. Susanne has been an artist her entire life. She studied in a specialized track at Cass Tech High School in Detroit and earned a masters from the Rhode Island school of Design. She taught art for over 30 years in the United States and now teaches and works from her studio in Tel Aviv.

Michal Nachmany. “My Jerusalem” series. With permission of the artist.

Michal Nachmany, artist, graphic designer, fashion designer. “Michal Nachmany, an Israeli-American (b. Jerusalem, 1958), is a self-taught artist and educator. She began exhibiting her work in September 2015 in New York City, and since then has exhibited at community centers and galleries across New York City and the tristate area. Her inaugural international show opened in November 2016 in Taipei, Taiwan”. (courtesy Michael Nachmany Art website linked above).

Mindell Seidlin “Stars,Flowers, Leaves”, 2015. Part of a series responding to Matisse. With permission of the artist.

Mindell (Mindy) Seidlin,  artist, multi-media.  Seidlin (like Joseph Zrihen, see above) is a widely respected physician and consultant to pharmaceutical and bio-technology companies.  Seidlin sites her work in medicine and her study and devotion to Judaism as foundations of her art. In 2007, Seidlin left her full time career in drug development to begin making collages and mixed media pieces. (information from Mindy Seidlin Studio website linked above).

Martha Fischer is a self-taught artist who works primarily with textiles and fabrics.  She learned from her mother how to sew and knit and now creates extraordinary quilts. Martha has lived in Tel Aviv with her husband, Larry, since 2011.

Menashe Kadishman. Sculpture on Habima Plaza. Photograph by the author.

Menashe Kadishman is a world-renowned Israeli sculptor (August 21, 1932 – May 8, 2015). His wide-ranging work, often dealing with gravity and how to defy it, is in cities and collections in Japan, the Netherlands, Costa Rica, the United States, Canada, Italy and Israel.

Personal notes:
1. Miriam Dreiblatt is my beloved niece.
2. Liz Baron and her husband, Jim, are, and have been, among my closest friends for the past forty years.
3. Debbie Garber and I have been friends since we attended college together at neighboring schools, Brown University and the Rhode Island School of Design, in Providence, Rhode Island.
4. Bill Jacobson was a classmate at Brown University and has been a friend since then. His work provided the world images with which to understand the AIDS crisis.
5. Joseph Zrihen is my doctor, my confident and my counselor.
6. Susanne Woyciechowicz has been my friend from the first day I set foot in my (our) synagogue, Kehilat Sinai, in Tel Aviv. Her heart and mind are always open.
7. Michal Nachmany is a dear friend, an inextinguishable source of energy and was, for a while, my Hebrew teacher.
8. Mindell (Mindy) Seidlin is a dear friend, with her husband David Fishman, and was a constant source of wisdom and support to me as a member of the executive committee of  Ansche Chesed in New York when I was president.
9. Martha Fischer is a friend from Kehilat Sinai in Tel Aviv. She is the definition of a hidden artist: enormous talent and great modesty.
10. I did not know Menashe Kadishman but I live next to his magnificent sculpture on the square at the Habima performing arts center in Tel Aviv and it enlivens my day, every day. Thanks to my friend Suzanne Landau for a quick art history lesson about Kadishman one early morning.