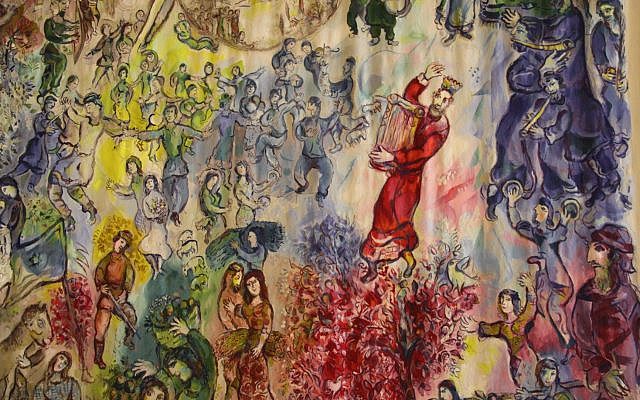 Painting by Marc Chagall in the Knesset of Israel in Jerusalem. Rights for the image from alamy.com.

Rabbi Nahum Sarna calls this parasha the “hinge of the Torah” because it contains the revelation of the Ten Commandments at Sinai (and so to each of us everytime we read it). In popular imagination, the Ten Commandments were given to the Israelites on tablets of stone.  True and not true.  The first revelation came to us by “voice”, in words, as is clear in this chapter.  And this is critical to understanding the The Commandments themselves:  they are written in stone but can only be understood when we listen. They, by themselves, are inert. Our human capacity to listen, to learn, to understand and, ultimately, to act, brings them to life and into our lives.

Here are my notes:

1. Like a great orchestral composition, the chapter treats us to an important overture before we arrive at the revelation of the Ten Commandments at Sinai. Yitro (Jethro) Moses’s father-in-law is reintroduced to us:

Jethro, priest of Midian, Moses’ father-in-law, heard all that God had done for Moses and for Israel His people, how the LORD had brought Israel out from Egypt. So Jethro, Moses’ father-in-law, took Zipporah, Moses’ wife, after she had been sent home and her two sons—of whom one was named Gershom, that is to say, “I have been a stranger in a foreign land”; and the other was named Eliezer, meaning, “The God of my father was my help, and He delivered me from the sword of Pharaoh.” Jethro, Moses’ father-in-law, brought Moses’ sons and wife to him in the wilderness, where he was encamped at the mountain of God.  He sent word to Moses, “I, your father-in-law Jethro, am coming to you, with your wife and her two sons.” Moses went out to meet his father-in-law; he bowed low and kissed him; each asked after the other’s welfare, and they went into the tent. Moses then recounted to his father-in-law everything that the LORD had done to Pharaoh and to the Egyptians for Israel’s sake, all the hardships that had befallen them on the way, and how the LORD had delivered them. And Jethro rejoiced over all the kindness that the LORD had shown Israel when He delivered them from the Egyptians. “Blessed be the LORD,” Jethro said, “who delivered you from the Egyptians and from Pharaoh, and who delivered the people from under the hand of the Egyptians. (EX 18:1-10)

Jethro is a terrific man.  He is an adult!  He is a high priest in his own church, and though he loves, admires and appreciates his son-in-law (Moses), has no interest in joining him nor does he need to do so to express his love and support.  This passage also brings to mind the question raised by Rabbi Ariel Pollak about the nature of our relationship to Judaism.  Are we a tribal people bound by blood or a spiritual community bound by shared values and education?  Jethro is part of the latter clearly.  But, in truth, we are all some of both.

Next day, Moses sat as magistrate among the people, while the people stood about Moses from morning until evening. But when Moses’ father-in-law saw how much he had to do for the people, he said, “What is this thing that you are doing to the people? Why do you act alone, while all the people stand about you from morning until evening?” Moses replied to his father-in-law, “It is because the people come to me to inquire of God. When they have a dispute, it comes before me, and I decide between one person and another, and I make known the laws and teachings of God.” But Moses’ father-in-law said to him, “The thing you are doing is not right; you will surely wear yourself out, and these people as well. For the task is too heavy for you; you cannot do it alone. Now listen to me. I will give you counsel, and God be with you! You represent the people before God: you bring the disputes before God, and enjoin upon them the laws and the teachings, and make known to them the way they are to go and the practices they are to follow. You shall also seek out from among all the people capable men who fear God, trustworthy men who spurn ill-gotten gain. Set these over them as chiefs of thousands, hundreds, fifties, and tens, and let them judge the people at all times. Have them bring every major dispute to you, but let them decide every minor dispute themselves. Make it easier for yourself by letting them share the burden with you. If you do this—and God so commands you—you will be able to bear up; and all these people too will go home unwearied.” Moses heeded his father-in-law and did just as he had said. (EX 18:13-27)

If Jethro were with us today he would be an executive coach!  And he shows us what it means to be  generous to a younger generation with (his) experience and wisdom.

Now then, if you will obey Me faithfully and keep My covenant, you shall be My treasured possession among all the peoples. Indeed, all the earth is Mine, but you shall be to Me a kingdom of priests and a holy nation.’ (EX 19:5-6)

These lines give us the idea that Jews are the “chosen people”.  This is a source of Jewish pride (and arrogance) and a source too of anti-Semitism and resentment. As often, the hard part of the sentence and agreement (covenant) is overlooked: “If you will obey me faithfully and keep my covenant (THEN AND ONLY THEN)  shall you be a treasured possession…..”.  So, this makes the word and the statement very clear : if we CHOOSE then we will be CHOSEN.  It’s not a given.  It’s not granted. It’s a choice.  And it is accessible to all, Jews and non-Jews alike.  It’s not about being chosen it’s about choosing. “Chosen” is a static adjective, “Choosing” is an active verb!

The Ten Commandments need no commentary.  They are as clear as day. Yet they need to be commented and reviewed every day and forever (in order that we own them and incorporate them into our daily lives).

The fourth commandment:  Remember the sabbath day and keep it holy. (EX 20:8).

“Observe and Remember, in a single word, the One God announced to us. The Lord is One, and his name is One, for fame, for glory and for praise.”

In the song, “observe” and “remember” are pronounced by Gd as one word, not two! Rabbi Gunther Plaut teaches us that “to remember” and “to observe” are two sides of the very same coin and that when we do one, we do the other too.

The sixth commandment: You shall not murder (EX 20:13).
This may seem obvious but the rabbis (Nahum Sarna, Ibn Ezra) teach us that one can murder by the hand and by the tongue. In Jewish observance and practice, gossip, character assassination and humiliation of another person are forms of “murder”.

This commandment has given rise to many humorous interpretations (including among gay men). I’ll leave all of those aside.  I will share however, thanks again to Rabbi Nahum Sarna, a beautiful Hasidic comment: Sarna suggests that, according to the Hasidim, this is not a commandment but a reward, a statement. In other words, IF we live by the first nine commandments, THEN we will have no reason to covet, we will be spared the curse of envy.