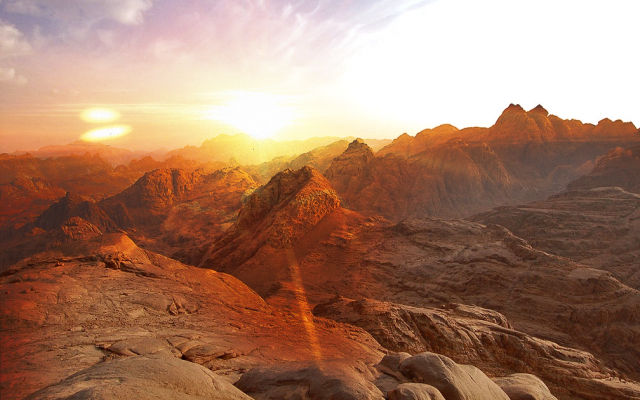 This week’s parasha describes the dramatic moment when the People of Israel signed the Covenant with God at Sinai, a mutual agreement between People and God, encapsulated in the Ten Commandments (more accurately: “Ten Precepts”) that form the backbone of the Written Law.

The receiving of the Torah marks the official incorporation of Am Yisrael — the final step in the transition from disparate individuals with a common kinship and history into a people, bound to each other by irrevocable decree. And yet, there is some question as to whether the Covenant was a voluntary agreement. The people are promised peoplehood in exchange for obedience:

At first glance, the people seem to be offered a choice to accept the Covenant or to say “No thank you” and go about their business. Instead, they enthusiastically agreed to the conditions: “All that the Eternal has spoken we shall do!”

Is a coerced contract binding?

But what follows is a scene of such awesome power and terror that the people retreat from the mountain and ask that Moshe go forward alone: “You speak with us, and we will hear, but let God not speak with us lest we die.”  Moshe is depicted as going into הָֽעֲרָפֶ֔ל — the “opaque darkness where God was”

The Talmud, ever sensitive to textual nuances, picks up on the hints of darkness and unease:

The ratification of exile

Why “in the time of Ahasuerus?” The story of Esther is the quintessential story of exile: the Temple is in ruins and the people of Israel and Judea scattered to the four winds. Jews live under the rule of foreign despots and the specter of genocide is never far away. In essence, the exile was a return to the circumstances of Egypt. So how could it be that the exiled Jews of Persia “ratified” the Torah that had been given at Sinai?

One answer may be that the exiles were the ones best suited to do so because they were living in exile. With God’s hand nowhere in evidence, they were free of any hint of divine compulsion. As opposed to the generation of Sinai, who were overwhelmed by the thunder and lightening and the sound of the shofar from the mountain, the Jews of exile could choose not to trust in divine providence. They had every reason to cease being Jews and simply assimilate into the larger peoples around them. But they didn’t! When Haman’s decree of extermination fell upon them, they didn’t hide among the nations; rather, they stood firm, fasted and prayed, and made ready to fight and die. In their determination not to give up on the promise made at Sinai, despite their having every excuse to do so, they did indeed “confirm and accept” the Torah anew.

The contract with Eternity

This is exactly the fulfillment of the terms of the Covenant from God’s side: the promise of enduring peoplehood — a kingdom of priests.  This sense of peoplehood is something that religious creeds alone cannot provide. As Michael Wyschogrod eloquently pointed out, Judaism is more than an ideology or religion:

Judaism is not a set of ideas. There are ideas that are specifically Jewish and that can be presented as the teachings of Judaism. But they do not constitute Judaism. Separated from the Jewish people, nothing is Judaism. If anything, it is the Jewish people that is Judaism. (The Body of Faith, p. 174)

Judaism runs far deeper than the cerebellum. It is not a “set of ideas” nor an ideology; it is a culture, a commonality of shared destiny, a family… It is built on those things that touch us on a visceral level, far below the conscious, thinking, rationalizing mind. It is a thing of the heart and soul, not the mind. And as such, belief alone cannot define who is in and who is out. Judaism is not a religion! It is not a worldview or a set of beliefs about the world or about God, or even about the place of human beings in the world. Although all of those things are part of Judaism, they do not define its essence, nor do they set the boundaries for inclusion or exclusion.

In accepting the Torah we agreed, as a nation, to partner with something outside of ourselves, and to be molded by that force, for better or worse. This is a very different form of partnership to that of the Social Contract, whereby individuals voluntarily surrender certain rights in exchange for security. In our case, we agreed to surrender, not rights, but national volition, and we did so blindly, trusting that the other half of the partnership knows what He’s doing. This may be one reason we place so great an emphasis on free will on the individual level — because at the societal level, we have surrendered it almost entirely, having agreed to play by rules that we accepted on blind faith.

And so we find that the stipulation “If you obey My commandments… you shall be to Me a kingdom of priests” is a self-fulfilling prophecy. There is the sense that we are all in the hands of the same transcendent destiny: something imposed from outside of us, rather than a self-imposed goal. We Jews are a bit like a party of people who find themselves at sea in the same boat, tossed about by the same storm winds. We’re all seeking shelter from the same God, and we all take comfort in the same God.