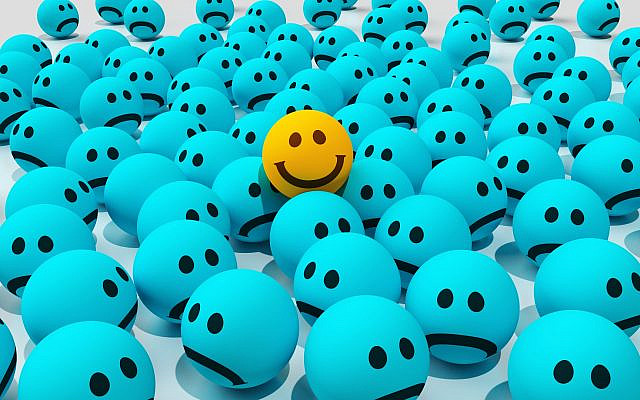 When we consider the things that the Torah asks of us, happiness is not what usually comes to mind. Judaism is often painted with a brush that depicts it as a life of service, submission, and obedience, absent of any color or vitality. Divine service and living mitzvot (commandments) should certainly be valued priorities, but if they are missing lively spirit — the exhilaration, excitement, and happiness of a Torah life — then they are sorely lacking.

In Parshat Ki Tavo, there are two pesukim, each near the beginning and end of the parsha, which direct us to the “obligation” to be happy. The first mention is in the context of one bringing the bikurim (first fruits) as an offering to Hashem, an act which the Rashbam says is an expression that our wealth and luxuries are sourced only in Hashem’s abundant and loving kindness. The following pasuk, however, does not follow with words of disempowerment, rather it says, “Then, you shall rejoice with all the good that the Lord, your God, has granted you and your household you, the Levite, and the stranger who is among you” (Devarim 26:11).

Following a mitzvah of gifting the first fruits of one’s soil to Hashem, the Torah explains that we will rejoice, feeling an uplifting sense of self and purpose. The goal is not disillusionment.

Nearing the end of the parsha, the Torah is more explicit in its attitude toward happiness. Speaking about the curses we would bring about ourselves by failing to live Hashem’s mitzvot, the Torah attributes it to a powerful reason: “Because you would not serve the LORD your God in joy and gladness over the abundance of everything” (Devarim 28:47). Rabbeinu Bahya writes that we are not supposed to just carry out Hashem’s guidance and mitzvot, but we must do so in a happy frame of mind.

This pasuk and comment could be understood in two effects: The first would be one of frustration with a defeatist attitude. “Why isn’t it enough that we need to enslave ourselves to Hashem and obey His every word? Now, He even demands that we do so with a smile?” one could ask.

An alternative approach, however, begins with reshaping our understanding of mitzvot. In truth, Hashem provides us with the guidebook on ultimate self-awareness, the total return to the inner godliness of every single person: This is the function of mitzvot. The Torah is our roadmap to reclaiming our identities as souls, bringing our inner essence to the surface of our very being. However, Hashem does not want the journey of self-enlightenment to be one of sorrow and misfortune.

Imagine if, while training to become a world-class doctor, one acted like a disgruntled teenager who feels like they’re submitting to their parents’ will. In reality, the individual is undergoing a fantastic journey of growth and progress, the epitome of the human experience.

Despite its detailed account of the consequences of not living a Torah-centric life, Parshat Ki Tavo speaks volumes about something mistakenly overlooked: our happiness. We are required to happily live mitzvot, not as a form of overbearing control, but as a necessity for living a joyous life. Hashem’s words in the Torah pave the road toward awakening our inner godliness. We should walk this path as if our feet were imprinting themselves along the soft, formative sand, set with a sunset backdrop, not as if we’re fumbling over blistering coals.