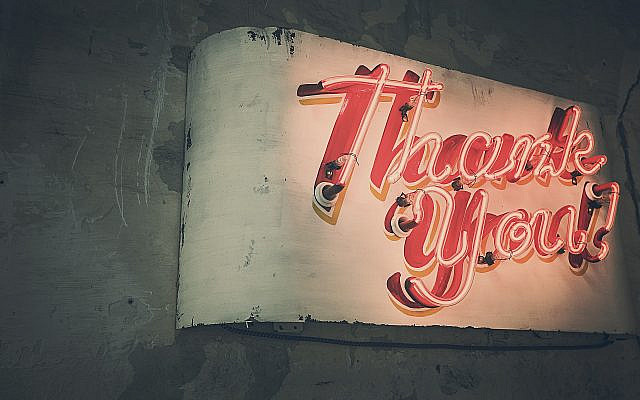 When do we say, “thank you”? Generally, we imagine it’s when someone does something for us, whether expected or not, that we find favorable in some capacity. That happens quite often, so we would presume that we also thank others quite often, but that’s not the case.

Jennifer Schuessler wrote in her New York Times article, “Think You Always Say Thank You? Oh, Please,” that, in actuality, humans say those words “far less often than we might think.” Citing a study by Royal Society, she says that in informal settings, people receive expressions of gratitude for about one of 20 occasions when they’ve complied with requests for an object, a service, or help. People do things deserving of thanks and, often, we don’t reciprocate their actions with the words they deserve. In Parshat Ki Tavo, the Torah teaches us a crucial idea about gratitude and the power of thank you.

In the beginning of the parsha, Moshe speaks to Bnei Yisrael about bikkurim — the first fruits the Jewish People would bring to the Beit HaMikdash (Temple) in Jerusalem. He tells them, “You shall go to the priest in charge at that time and say to him, ‘I acknowledge this day before the LORD your God that I have entered the land that the LORD swore to our fathers to assign us’” (Devarim 26:3).

The bikkurim are commonly associated with the idea of gratitude, but why is that? The Chizkuni explains that the essence of this declaration is thanks; through this process, we acknowledge the privilege Hashem bestowed to us by giving the Land of Israel, we acknowledge that He kept His promise, and we acknowledge that we benefited from it. Then, the Chizkuni says, we use these fruits as a demonstration to express our thanks. The Ibn Ezra has a similar thought.

This description provides us with an important model of where gratitude emerges. First, it requires the humility and vulnerability to admit that someone else can benefit us. Second, it means we must forego the ego’s fearful instinct against acknowledging someone else’s success. Third, it needs us to actively admit this in real life through those thanks. With the bikkurim, this is exactly the framework that the Torah sets up. Still, though, what novelty can we learn out from the idea of gratitude, especially when we’re thanking Hashem?

The first thing we are meant to say when we wake up in the morning is the Modeh Ani. It says, “Thankful am I before You, living and enduring King, for You returned my soul to me, mercifully — great is Your faithfulness.” There is a lot packed into these words, but the main idea is those beginning words: “Thankful am I before You.” Here, you become defined by your gratitude. In that moment, you completely release your ego and give heartfelt appreciation to Hashem. In that moment, you stand before Hashem, consumed by gratitude. As Rav Kook writes in Olat Re’iyah, “Gratitude, recognizing the goodness of the Lord of the world, Master over all works, who in His goodness gives life to the living, is the storehouse of good.” The Modeh Ani is meant to overflow us with this ultimate goodness — relinquishing the ego to drift softly into the warm embrace of Hashem.

Thanks has immense power. We cannot just say “thanks,” but we must become our thanks. Bikkurim succeed in quashing the ego to allow the soul to shine through. Souls shine through with love, light, and gratitude. When we deny the latter, we also deny the soul, too.