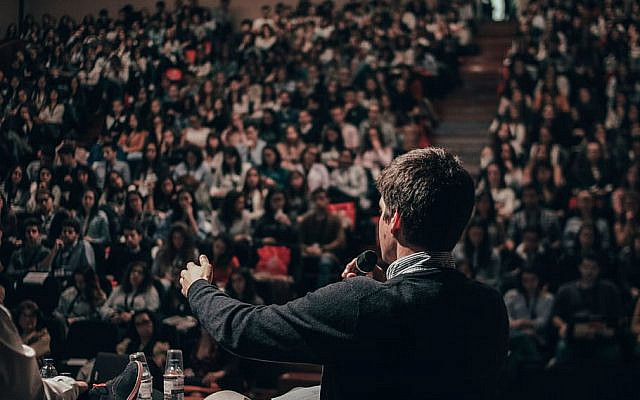 Speaking to a crowd (Wallpaper Flare)

Discomfort is a two-sided coin. It could be agitation which chains us to the sidelines and forces us away from a given issue, silencing our minds and our voices. Contrarily, that distress could be the single flame that ignites the active passion within us all to take action and take a stance. The double-sided nature of discomfort, therefore, is one which can inhibit or inspire us, controlling our souls from acting upon what we know in our hearts. In Parshat Shelach, the Torah shows us a figure who embodies the essence of unapologetic action.

Bnei Yisrael, according to many commentaries, first asked Moshe to send spies and investigate Eretz Yisrael (The Land of Israel) before they entered the land. Parshat Shelach begins with Hashem permitting this request, saying, “Send men to scout the land of Canaan, which I am giving to the Israelite people; send one man from each of their ancestral tribes, each one a chieftain among them” (Bamidbar 13:2).

Known as the “12 spies,” the selected leaders are sent by Moshe to scout Eretz Yisrael and, according to different commentaries, either report on the land’s excellence in affirmation of what Hashem promised Bnei Yisrael or deliver a strategic military-plan for conquering the land.

After their 40-day mission, 10 of the 12 spies returned and unloaded their problematic report, exacerbating Bnei Yisrael’s great insecurity and worry. Then, the Torah notes of an interjection in the midst of their report: “Calev hushed the people before Moses and said, ‘Let us by all means go up, and we shall gain possession of it, for we shall surely overcome it’” (Bamidbar 13:30).

Rashi writes on Calev’s words “Let us by all means go up” that, even if Bnei Yisrael were going to “climb up to the heavens,” Hashem’s help would make it possible. In context, he’s assuring the people that entering Eretz Yisrael would not be the daunting, impossible task they imagine it to be. His message is, of course, an important one: have complete trust in the explicit words and promises of Hashem. However, the idea that he is addressing per se is not what earns him such unique praise.

Calev did something extraordinary: Standing beside great men of the shevatim (tribes), he felt uneasy, uncomfortable, and unwilling to silently stand by. As their words caused harm and detriment to the relationship between Bnei Yisrael and Hashem, Calev knew he needed to act; He, the sole, active voice of reason, silenced the commotion and spoke up in defense of Moshe, in defense of Hashem.

“Every person has the ability to change the world,” Rav Kook writes. “It all exists within one’s spiritual resources…There is no limit to the power of the soul. It is a candle of the Divine in the world” (Shmoneh Kevatzim 1:846).[1]

Rav Kook’s words frame Calev’s actions in a new light. Hashem entrusts us with immense power, the power to change the world; that power begins with unapologetically standing in defense and promotion of our values. Learning from Calev, we must bring ourselves to speak up for the truth we know, in our souls and our hearts. And no matter the issue or the situation, when we speak for goodness and justice from the depths of our souls, we are changing the world.

[1] As Translated by Rabbi Ari Ze’ev Schwartz in “The Spiritual Revolution of Rav Kook,” p. 17