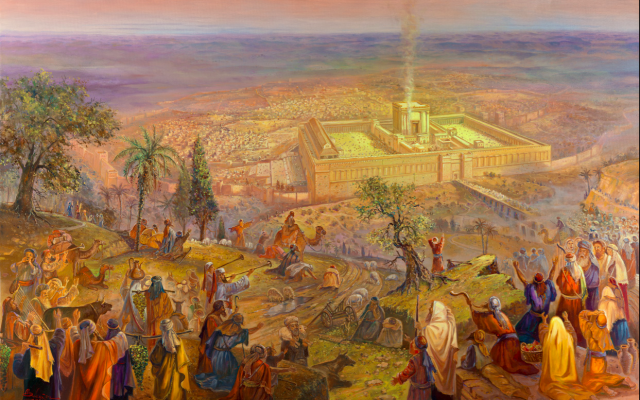 Pilgrimage to the Second Jerusalem Temple, By: Alex Levin on Artlevin.com

There are some places people deem “holy” and other ones considered “unholy.” What, however, does it actually mean for a place to be “holy”? Holiness is something that can be found in places and embodied in people, but it is often misunderstood. When Parshat Terumah recounts Hashem directing Moshe Rabbeinu for the construction of the Mishkan (Tabernacle), we gain an extraordinary insight into our question.

In the early pesukim, Hashem tells Moshe, “And make Me a sanctuary, and I will dwell bitochom” (Shemos 25:8). That last word, bitochom, is often translated as dwelling “among them,” referring to Bnei Yisrael, in the Mishkan. However, the prefix of bi means “in” or “by means of,” leading some to translate it as dwelling “within them.” Each translation of the pasuk — whether Hashem is saying He will dwell among Bnei Yisrael or in Bnei Yisrael — provides a profound answer to the original question, and it all comes back to holiness.

Rabbi David Aaron explains holiness to be wholeness, the state of plugging into the reality of Hashem’s all-encompassing Oneness of the world. Holiness is living life in the richness of the physical world while transcending it all the same, being in it and beyond it. It’s the ultimate completeness of life between spirituality and physicality, the synthesis of the physical and the spiritual into one whole. Now, we can take a deeper look at the double-meaning of the pasuk.

In Talelei Chaim: Mikdash Melech, the Chalban discusses the perplexing idea of Hashem “dwelling” in one area, which relates to Hashem in the Mishkan. If, as we understand, Hashem is unbound, timeless, and the very Source of all life and reality, how can His presence be felt more strongly in one place than another — how can He “dwell among us” in the Mishkan?

The Chalban offers a beautiful analogy about this in the first chapter, comparing the experience at the Mishkan to a signal and a radio. The signal emitted from a particular point is equally present in a particular area, but if the radio is not tuned properly or programmed to receive it in a given location, the radio cannot connect with the signal. We are the radio, and Hashem, so to speak, is the signal. Hashem is equally present and available everywhere, but we are not receptive to Him in the same way in any given area. Thus, it’s the holiness of the Mishkan and the Beit HaMikdash where our receptiveness is most astute to His presence and we can more authentically feel His presence.

On the other side, we also see what it means for Hashem to dwell within us. The Nefesh HaChaim explains that when Hashem says He will dwell bitcochom, it literally means within them. When a person, likened to the Mishkan itself, embodies goodness, justice, peace, and all the deep Torah-values in their lives, they allow Hashem to dwell within them. This depends on treating ourselves with the worth of the Mishkan. Essentially, you become a channel for Hashem in this world, and when you interact with others, bring Hashem into the encounter, as if you were a lantern illuminating a brilliant light against the darkness of life. To have Hashem dwell within you is to have love and goodness radiate through you, to be a candle of light in a dim-lit world.

We can strive to make ourselves holy places and holy places for ourselves — all the possibilities are waiting to be realized. When we decide to metaphorically build the Mishkan in our inner and outer worlds, Hashem dwells among us and within us. We and the world become holy places.