“And Jacob went out (vayeitzei) from Beer Sheba, and he went to Haran.” (Genesis 28:10). Our Sages say that Jacob dwelt in the tents of Eber for 14 years before going to Haran. During that time he immersed in Torah study far from the material illusions of the world represented by Haran (lit. “wrath”) and by Laban, his uncle and future father in law.

In this time of study Jacob prepared himself to “descend” into the domains of his uncle whom mystic Sages consider as the Deceiver himself. We know that in the realm of illusions everything is deceiving for the fact that all is an illusion derived from materialism. In this context the mission of Israel (Jacob) is to clear the darkness of illusions with the light of the Torah.

Jacob is indeed ready to execute the birthright as the priesthood despised by his brother Esau. It begins by establishing the
permanent connection with the Creator in His place (the Temple of Jerusalem) which represents our highest level of awareness of God: “And he arrived (lit. reached) at the place, (…) and he lodged in that place.” (28:11) and “(…) behold! A ladder set up on the Earth, and the top of it reached to Heaven; and behold the angels of God ascending and descending on it.” (28:12). 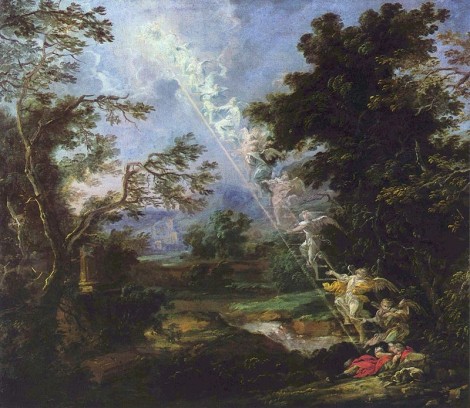 This is the connection that makes us aware of our unity with the Creator, and the angels as the messengers of God’s ways and attributes that fulfill His will when we allow ourselves to be the vessels of His blessings: “(…) the Land upon which you are lying, to you I will give it, and to your seed.” (28:13).

The place where we connect with Him is also the Promised Land as the material manifestation of His blessings, the goodness we can be and do in this world because His Love is not only for us but for all His Creation: “and through you shall be blessed all the families of the Earth and through your seed.” (28:14), a true partnership with God in His Creation: “I am with you, and I will guard you wherever you go, and I will restore you to this Land, because I will not forsake you until I have done what I have spoken to you.” (28:15).

This partnership is bound to the Promised Land as the place that we share with our Creator: “And he called the name of that place Bet-El (House of God).” (28:19), where we all yearn to live, and it can happen as long as we live in the awareness of God’s love. In this sense we understand what our Sages teach when they say that “God is the place of the world, and the world is not His place”: His love is “the place” that pervades His Creation and sustains it.

We have mentioned many times in this blog that everything emanates from the Creator and is sustained by Him. The entire Creation is a manifestation of His love, hence we are made of His love in order to be love. Thus we exist and belong to Him, and we must “return” to Him as part of the dynamics of a Divine Plan that we yet can’t comprehend, neither His Essence. In this dynamics we understand the meaning of tithing back to Him: “and everything that You give me, I will surely tithe to You.” (28:22).

Our Sages teach that the tithes to the Temple are the means to elevate our souls to God by doing what He considers sacred in our lives (this is how we “sacrifice” for Him), and after the destruction of the Temple our tithes are what we give to those in need. In sum, we are in this world to give from what God’s love has given us and continues giving us in every breath we take. This is how we rectify the world (tikkun olam) through this Commandment: “and you shall love your neighbor as yourself, [because] I am the Lord.” (Leviticus 19:18) because everything is about God’s love.

At this point in the parshah we realize that Jacob’s continuous dwelling in the House of God, His place and His Promised Land, is not only God’s promise and will but also His Commandment. Before a permanent settling Jacob first had to face the perils of the illusions of the material world, and clear his way to raise a family amid the darkness of the negative aspects of consciousness where his future wives grew up. As we said earlier, this is Israel’s mission as the Chosen People: to reveal, proclaim and manifest God’s ways and attributes as His Presence amid the darkness of gross materialism. 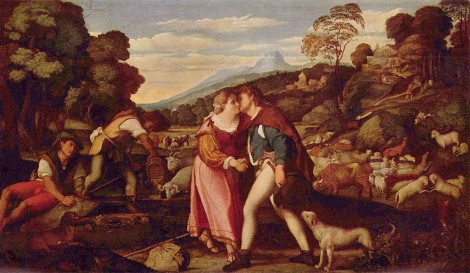 Three times Laban’s name is mentioned in relation to his sister Rebecca, Jacob’s mother. We can infer from this repetition that as Rebecca was redeemed from the darkness of her brother’s household, Laban’s daughters also would be redeemed by Jacob’s diligent labor dwelling in Laban’s domains. Mystic Sages comment on the complexities of the interaction between light and darkness because is not an easy matter to deal with ego’s materialistic fantasies in a world where illusions are the references related to life.

Love as the truth is concealed behind the darkness of ego’s feelings of lack in all levels of consciousness, including mind, emotions, feelings, passions and instincts. When these are under the rule of ego’s negative desires and not under love’s ways and attributes, life and the world can become the hell that already is for many people. Jacob had to confront the jealousy and rivalry of his wives, the greed and wickedness of his father in law, and the negative emotions that we must redirect into the paths of love.

Children came into this state of affairs, and Jacob’s endeavor became more difficult and challenging to make his offspring the adequate vessels for God’s promised blessings. This is not a quest for “perfection” but a road to turn our individual and collective circumstances into a dwelling place for the love that made us and the love that we are.

From the passages of Jacob’s relationship with Laban we learn that the deceit of material illusions fades before the truth that love is: “(…) ‘I see your father’s countenance [Laban’s], that it is not toward me as before time; but the God of my father has been with me.” (31:5) and as Leah and Rachel said to Jacob: “(…) all the wealth that God separated from our father is ours and our children’s. So now, all that God said to you, do.” (31:16). 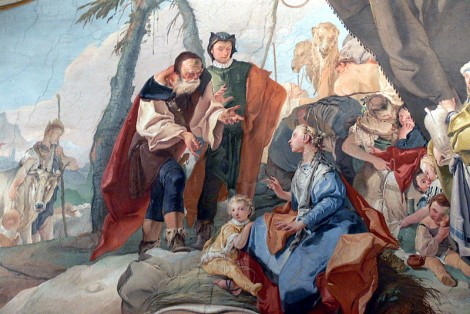 The portion ends confirming that God’s love dwells with us when we dwell in His ways and attributes, His Promised Land: “And Jacob went on his way, and the angels of God met him. And Jacob said when he saw them: ‘This is God’s camp.’ And he called the name of that place Mahanaim.” (32:1-2).

About the Author
Ariel Ben Avraham was born in Colombia (1958) from a family with Sephardic ancestry. He studied Cultural Anthropology in Bogota, and lived twenty years in Chicago working as a radio and television producer and writer. He emigrated to Israel in 2004, and for the last fourteen years has been studying the Chassidic mystic tradition, about which he writes and teaches. Based on his studies, he wrote his first book "God's Love" in 2009. He currently lives in Kochav Yaakov.
Comments