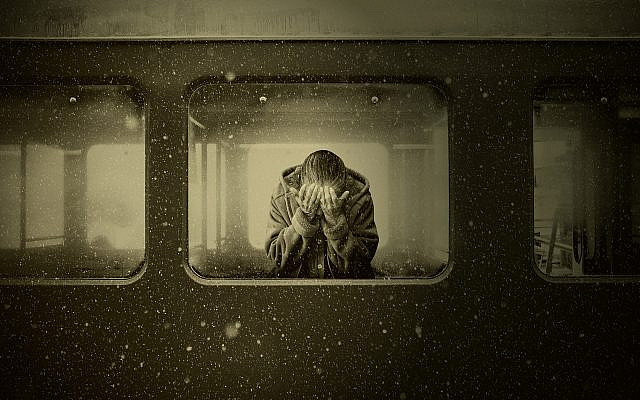 Woman on a train (Pixabay)

Elite poker players have mastered the art of masking their emotions; they construct a façade of neutrality and refined composure to conceal any expressions which could jeopardize their “hand.” In life, we sometimes adopt this persona in an unhealthy way. Of course, there is a time and place for expressing our emotions, but we sometimes act more constrained than need be. In Parshat Vayigash, we uniquely see Yosef in a candid moment of intense emotion.

The parsha begins with Yehuda delivering a passionate speech to convince Yosef to allow Binyamin to return home, lest Yaakov suffers the loss of another son. Following this, the Torah says, “Now Joseph could not restrain himself in the presence of all who stood before him, and he cried out, ‘Remove everyone from before me!’ Thus no one remained with him when Joseph made himself known to his brothers” (Bereishis 45:1).

Yosef becomes very vulnerable in this pasuk. The Radak comments that Yehuda’s constant reference to Yaakov’s mental anguish proved too much for Yosef to bear, so he can no longer retain his composure. Yosef then removed others from the room so he would not make a public spectacle of himself.

In the following pasuk, the Torah says, “His sobs were so loud that the Egyptians could hear, and so the news reached Pharaoh’s palace” (Bereishis 45:2).

In this regard, the Torah highlights the passionate feelings that Yosef released. Rav Samson Raphael Hirsch says “Vayitain et kolo bichvi,” which he translates as “And he gave his voice free rein in weeping,” shows that Yosef’s uncontrollable sobbing was a proof of his sincerity.
What can we learn from this? Why do the Torah and commentators underline the sincerity and vulnerability Yosef was experiencing at this moment?

I read an article from Insider, titled, “This Is Why It’s Dangerous to Bottle up Your Emotions,” which offers great insight into these questions. The author, Lindsay Dodgson, explains that if we walk through most of our days wearing a cement mask of calmness, bottling our feelings and suppressing our emotions, we are walking a very thin line.

Psychologist Perpetua Neo told Insider, “It’s this whole vicious cycle that happens when we oppress our feelings.” Neo contends that repressed feelings and experiences can boil and negatively manifest themselves years later.

Yosef went years with the unanswered questions about his family, his brothers and father, Yaakov. Now, finally confronted with the hardships of the past and the potential difficulties of the future, he makes well-thought-out decisions, as seen through the various actions he took during his earlier encounters with his brothers. However, when Yehuda delivered his final plea to bring Binyamin home and save Yaakov any more anguish, Yosef clears the room and opens the floodgates of his past.

We can learn an important lesson from Yosef. Sometimes we choose to walk through life with inhibitions that bubble inside—but even modern psychology has identified that that is a harmful approach. Yosef shows us that sometimes it’s important—necessary even—to release the reins of our emotions.