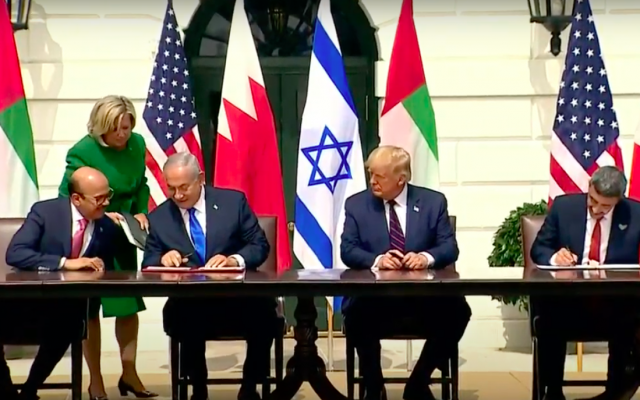 Peace and stability in the Middle East was proven possible this week outside the White House when Israel, the United Arab Emirates (UAE) and Bahrain signed historic peace treaties to have fully normalized relations and partnerships. Within the last few weeks the entire Middle East has been radically changed, sparking hope for future peace and stability in the region.

This wave was started by a surprise announcement on August 13th by US President Donald Trump stating that Israel and the UAE agreed to normalize relations. Trump, who helped broker the deal, was nominated for a Nobel Peace Prize for his role in bringing the countries together.

This is widely seen as a major victory by most of the world and received applause from countries like Egypt, Oman, and the European Union. The deal was rejected by Iran and the Palestinians who reacted by burning a poster of the UAE’s leader the day after the initial announcement outside the Al-Aqsa Mosque and again in Gaza after the signing. They also shot 13 deadly rockets from Gaza at the Israeli towns of Sderot, Ashkelon and Ashdod, just south of Israel – seriously wounding one and lightly hurting 6 others!

Normalization began immediately, and on August 31st, the first commercial flight from Tel Aviv to Dubai took place. Before then, Israel was unable to fly over Saudi Arabia and Bahrain, but both countries announced that moving forward they will allow Israeli flights over their airspace.

The following month continued with more breaking normalizations and treaties. During a joint meeting with President Trump, Serbia and Kosovo agreed to become the first Muslim majority countries to commit moving their embassies to Jerusalem. One day later Lazarus Chakwera, the President of Malawi also announced his country would open an embassy in Jerusalem. If they follow through, they would join only the United States and Guatemala who have already moved their embassies. “The circle of peace and recognition of Israel is widening and is expected to add additional countries,” happily proclaimed Israeli Prime Minister Benjamin Netanyahu following the announcements. What was once a bold move, having an embassy in Israel’s capital city of Jerusalem is becoming a fact of life.

On September 11th, Donald Trump once again made another bombshell announcement declaring that the Kingdom of Bahrain agreed to have full diplomatic relations with Israel and would join the UAE by signing an official peace treaty.

More potential peace may be on its way. Within the past few days, reports have started to emerge that Israel and Morocco are expected to establish direct flights between the respective nations. Great steps towards peace and normalization have been announced this past month, paving way for the potential genesis of regional peace. “After decades of division and conflict, we mark the dawn of a new Middle East,” said Donald Trump.

The UAE and Bahrain are the third and fourth Arab countries to agree to a peace deal with Israel, the other two being Egypt in 1979 and Jordan in 1994. In Israel’s entire 71 years of existence as a country, only two Arab Nations agreed to peace deals. Now, in just one single day, that number has doubled!

Named The Abraham Accords to symbolize peace and tranquility between Jews, Muslims and Christians, the deal promises open communication, exchange of ambassadors, direct flights between Tel Aviv and Abu Dhabi, as well as cooperation on tourism, security, education, technology, energy, and the opening of embassies between Israel and the UAE. The United States could also start selling the UAE F-35 fighter jets — much to the dismay of Israel. It is still unclear what impact it will have on Bahrain as they agreed to normalize relations with Israel only days before the signing of the accords. It is also worth noting that Israel has agreed to suspend extending sovereignty in Judea and Samaria in pursuit of a potential peace deal between Israel and the Palestinians.

It was understood throughout the region that up until last month, that peace between Israel and any Arab Country would not happen until Israel struck a deal with the Palestinians. Israel offered the Palestinians a peace deal earlier this year but it was rejected. Instead of waiting any longer, the priority has seemed to change. With ongoing corruption and terrorist activities from the Palestinian Authority and Gaza, the outside pressure to get a deal done has dwindled, and attention has shifted to more immediate threats.

Fear of the Iranian Regime acquiring a nuclear weapon and ballistic missiles is likely one of the factors enabling this peace deal, and it is why other countries in the region may soon follow. Iran, the world’s largest sponsor of terrorism, sends $16 billion annually to terrorist groups, according to the 2018 US State Department report “Outlaw Regime: Iran’s Destructive Activities.”

Iran’s influence on the region does not end at funding terrorist groups such as Hezbollah and Hamas, but also provides advanced weapons to the Houthi rebels in Yemen — propping up Syrian President Bashar al-Assad, attacking oil tankers in the Strait of Hormuz and oil refineries in Saudi Arabia, and attacking U.S. troops in Iraq (and more).

In July, Iran’s Foreign Minister Mohammad Javad Zarif confirmed that Iran was negotiating a deal with China. In this deal, China would boost investments by $400 Billion over 25 years and could lead to co-operations on weapon development, intelligence sharing, and joint military drills. Military drills between the two countries are not anything new either; in December 2019 Iran, China and Russia conducted joint naval drills in the Gulf of Oman.

An alliance with China and Russia, on top of Iran’s obsession with obtaining nuclear weapons, has alarmed the world. The Iranian Nuclear Deal was signed in 2015 in hopes to prevent Iran from acquiring nuclear weapons, but three years later the United States withdrew. Europe still remains in the deal, to the dismay of the Middle Eastern Countries.

Israel’s consistent and strong voice expressing opposition to the Iranian regime is appealing to the UAE and others. With Egypt and Jordan behind the scenes telling neighboring countries about Israel’s reliability on national security, it is a real possibility for more countries to follow in the UAE’s footsteps. Jared Kushner, President Trump’s senior advisor, has even predicted normalized relations between Israel and Saudi Arabia as an “inevitability”, while Israeli’s Intelligence Minister Eli Cohen predicted Sudan would open full relations with Israel by the end of the year.

Trump hinted that five Arab countries could be joining the UAE and Bahrain soon by also signing peace deals with Israel. Oman seems to be the country that Kushner and Trump feel has the best chance of signing a deal.

While regional tensions still exist, peace in the Middle East has just taken a big step forward. “This peace will eventually expand to include other Arab states. And ultimately, it can end the Arab-Israeli conflict, once and for all,” said Israeli PM Benjamin Netanyahu. With the potential of more peace to come, Israel has a golden opportunity to open up the region, normalize relations, and create a coalition against Iran.

Israel has never before had more allies in the region willing to openly cooperate with it. Not only has peace just been proven possible, but it has shined a light on what could be a unified region. More work needs to get done to secure even more peace and tranquility, and with all this momentum, only time can tell how far peace in the Middle East can go. The future is bright for Israel, the UAE, Bahrain and the rest of the Middle East, whose residents may-in-fact enjoy peace in the Middle East in the not-so-distant future.